Theatre Review: ‘Modern Terrorism: or they who want to kill us and how we learn to love them’ at the Contemporary American Theatre Festival in Shepherdstown, West Virginia 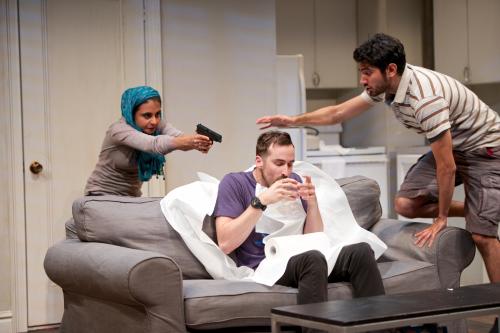 We have now lived with the ubiquitousness of terrorism for more than a dozen years.  During that time we have learned to hate the “terrorist” quite well.  We have also learned to kill him (or her) equally well, first with the flash of a Cruise Missile highlighted on the evening news and now with secretive Drone Strikes we never even hear about unless the target be infamous or an American with a trail of evidence.

…a fresh, humanizing perspective on the terrorist

In Jon Kern’s new play, Modern Terrorism, playing at the Contemporary American Theatre Festival, we learn more.  As Kern’s subtitle suggests, “or they who want to kill us and how we learn to love them.”  Do not let that subtitle fool you, however; if “to love” is “to know,” then you will not find yourself loving a terrorist any more than before after seeing this production, unless of course by love Kern is speaking narcissistically.   Then you will leave the theatre seeing a little bit of terrorist in every one, including yourself.

In Modern Terrorism we meet a modern American family… of sorts. 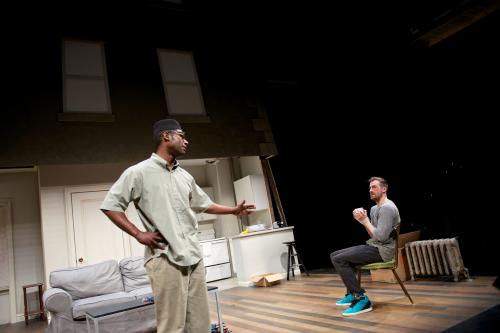 Royce Johnson as Qalalaase and Kohler McKenzie as Jerome. Photo by Seth Freeman.

The father-figure Galalaase, played with determined affection by Royce Johnson, has learned how to make bombs in Yemen.  A semi-devout Somali Muslim, he has decided to earn his 15 minutes of media fame by blowing up something important.  The wife and two daughters he has left in Dubai will only know of his courage and conviction.

The older sister-figure Yalda Abbasi, played with an eerie combination of deep loss and iPod fanaticism by Mahira Kakkar, wants to avenge her husband’s murder by an American Drone Strike.  A Wheaton, Maryland, native—who was only visiting Pakistan  in order to have a traditional marriage when her husband was killed—she also does not want to lose her iPod in the explosion; so, at the very least, she will save her iTune songs.  One of the most touching moments in the play happens when Ms. Kakkar portrays her loneliness after the loss of her new husband, a strange parallel to the lose of her iPod.

The son-figure Rahim Janjua, played with a debilitating innocence by Omar Maskati, wakes up one morning to the horrible contradiction of American college students who are at war and killing Muslims by proxy all the while getting drunk and watching stupid MTV party episodes.  He is willing to gain purpose in his life by suicide bombing the Empire State building even as he continues to play his X-Box and to cling onto his still packaged Action Figures.

If all these characters feel somewhat familiar to you, that’s because they are.  For in Modern Terrorism, the modern terrorist does not live in some obscure cave in the mountains of Afghanistan, but rather in an apartment in Brooklyn, or—as we recently learned—in Boston.  The modern terrorist is not, according to Kern, the religious fanatic willing to die (and kill the Other) for his God.  Rather, the modern terrorist can be found in the empty soul of every American, as we discover midway through the play when we meet Jerome.

Jerome, or as “the family” likes to call him, “3A,” played with reckless good fun by Kohler McKenzie, gets pulled into the action and, in order to fill the huge emptiness in his life (as well as to save his life) becomes his own version of a modern terrorist, or as he insightfully says of his new family, “You’re just the disgruntled postal workers of the international community.” 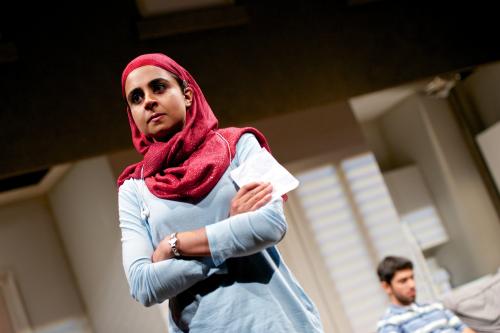 Set designer David M. Barber, costume designer Trevor Bowen, and lighting designer Traci Klainer Polimeni work well together creating the quasi-realistic set.  It is sound designer David Remedios who really captures the clash of styles occurring in this piece.  His musical sound design entertains all the way up to the point it terrifies us with its explosive punctuations.

Kern meant for his script to offer us a fresh, humanizing perspective on the terrorist, and it does that.  Director Ed Herendeen keeps the script’s tone as light as is humanly possible, despite its dangerous circumstances.  And it is not an easy razor’s edge to walk either.  On the one hand, Herendeen captures the comic picture of what it would look like to watch an underwear bomber prepare for his mission—we learn that shaving one’s pubic hair spares the bomber a good deal of pain when sitting down.  On the other hand, Herendeen does his best to keep us in a state of belief when one of his terrorists actually kills someone.

And that is, after all, the real challenge of this production.  The terrorist, be they modern or medieval or Roman or ancient Greek or the neighbor next door, has his humanity.  Like the professional torturer who calls home to ask about his daughter’s birthday party, the terrorist has family and loved ones; but he or she also has his inhumanity, that deep denial of others that allows him or her to kill without acknowledging their human existence, a denial usually brought on by loss and grief too painful and personal to bear.  That is the dark core of this dark comedy that is not quite dark enough to shine a clarifying light on a subject urgently in need of illumination.

Running Time: 2 hours with an intermission