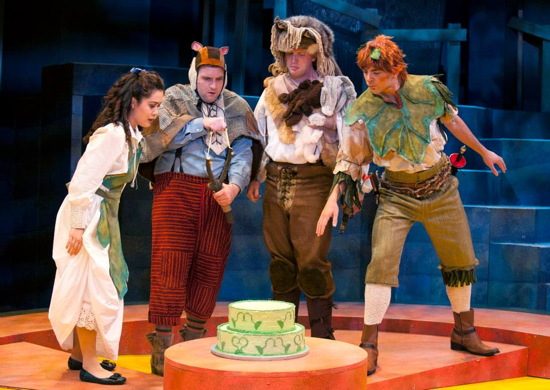 Justine Moral as Wendy, Matt Dewberry as a lost boy, Dan Van Why as a lost boy and Jonathan Atkinson as Peter Pan.
Photo courtesy of Imagination Stage

Imagination Stage’s production of the musical version of Peter Pan, Peter Pan and Wendy, written by Alyn Cardarelli with music by Steve Goers, is based on J.M. Barrie’s 1904 stage play Peter Pan, or The Boy Who Wouldn’t Grow Up.   Barrie’s stage play focuses on Peter, a boy who wanted nothing but to play and remain a child.  Peter’s adventures don’t bring him closer to adulthood, and although some might feel sorry for Peter because at the end of the story his friends choose to leave him for a warm happy home with parents, he knows he is always happiest in his arrested state.   This basic formula doesn’t change in Peter Pan and Wendy; Peter still refuses the idea of a family and adulthood.  The question in this production is – will Wendy embrace growing up?  Or will she always want to be a kid with Peter?

Imagination Stage has created a visual treat and a fun family delight with a heap of comedy and a dash sentimentality that is sure to touch the child in all.

This newer version of Peter Pan concentrates on Wendy Darling and her refusal to grow up.  The play opens with Wendy’s parents, Mr. and Mrs. Darling, lamenting how Wendy will not move out of her nursery, shed her little girl dress for a “big girl dress” and move into a new bedroom in the adult section of the house. Wendy is happy in her dream world of pirate adventures on the high seas and where her teddy bear is her best friend. 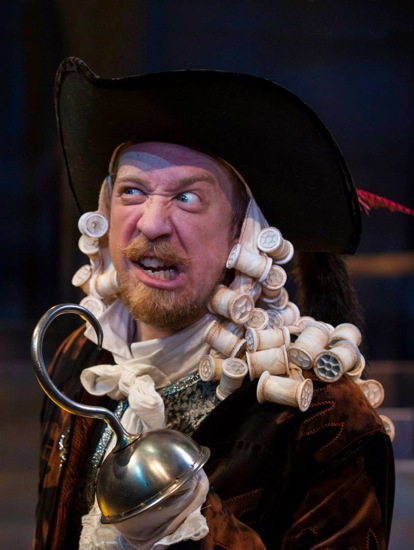 One night, Peter Pan arrives to whisk her away to Neverland, a magical island where lost boys, the evil pirate Captain Hook and his first mate Mr. Smee, a ticking crocodile, a Native American Indian princess named Tiger Lily and a little fairy named Tinker Bell live.  The characters sing, dance and duel their way through the adventures, and in the end, Wendy must make a very grown-up decision.

Imagination Stage’s production, directed by Kathryn Chase Bryer, uses amazing projection designs by Klyph Stanford that light up the backdrop.  We see aerial views of treetops and landscapes for the flying scenes and a waterfall made from projected lights for Neverland.  Set pieces slide down curtains that show the nursery walls and a cityscape.  The costumes are well done and traditional to a Peter Pan production but with a unique twist of creativity and fun that one can expect from anything Katie Touart designs.

The seven-member cast of Peter Pan and Wendy all do a wonderful job and work well together.  Wendy, played by Justine Moral, has a sweet singing voice and a great stage presence that is perfect for this role.  Jonathan Atkinson, who plays Peter Pan, does a great job at playing a vulnerable young boy who wants to run and hide, as well as a boy who must be brave and take care of his friends no matter what.  And the way he handled Tinker Bell is like watching an hour and a half magic trick. 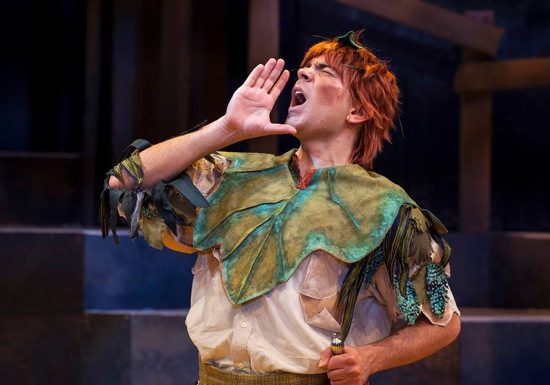 James Konicek as Captain Hook is flawless as a nasty but humorous pirate, and Michael John Casey is great as Hook’s bumbling sidekick Smee.  Matt Dewberry and Dan Van Why as the lost boys are enjoyable to watch, and their cameos [?] as mermaids is hysterical.  Angela Miller plays Tiger Lily as a plucky and courageous princess.

This production of Peter Pan and Wendy has no trouble engaging the children and adults with many invitations for participation.  My favorite is when Peter Pan asks the audience to make tic-tock sounds to scare away Captain Hook.

Imagination Stage has created a visual treat and a fun family delight with a heap of comedy and a dash sentimentality that is sure to touch the child in all.