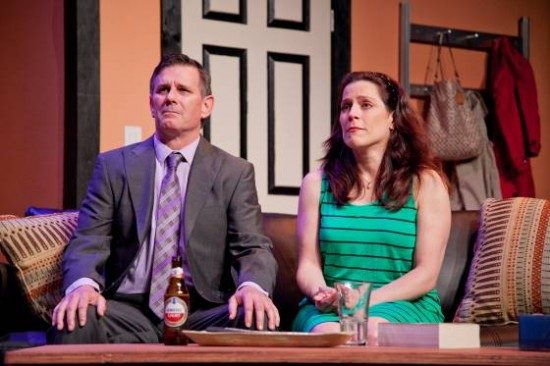 Keegan Theatre has a great deal to live up to in their recent production of Rabbit Hole. A work of the prolific playwright, lyricist and screenwriter David Lindsay-Abaire, Rabbit Hole has been the recipient of a full five Tony nominations in addition to the 2007 Pulitzer Prize for Drama. Pulitzer’s generally are not won lightly, and Lindsay-Abaire’s win was well deserved. The pressure is high, but director Kerri Rambow and her team at Keegan are able to do tremendous justice to the much praised script.

… a haunting production, full of pain and sadness

Rabbit Hole tells the story of the middle-aged parents Becca and Howie, played by the husband and wife artistic director team of Susan Marie and Mark Rhea, eight months after a car accident took the life of their four year old son Danny. It is a taut and powerful family drama that doesn’t dare waste a single word. Most scenes follow the roller coaster path of building a quaint family life for Becca and Howie complete with birthday parties, loads of laundry, and quiet nights of wine and TV only to have that world violently torn asunder again and again as the still brutally raw grief both parents feel for Danny bubbles to the surface. It is an extremely challenging script, requiring great discipline on the part of every actor to both acknowledge the subtext hidden in every line and gesture and to not let on that they are acknowledging it. 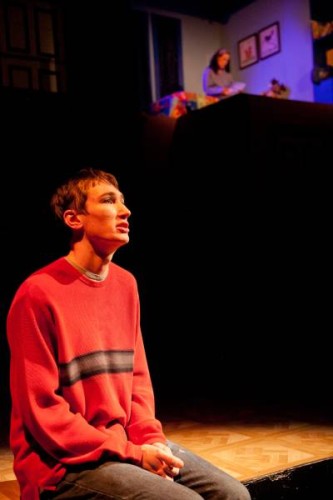 They are universally up to the challenge. Susan Marie Rhea in particular shines as Becca, towing beautifully and tragically the line between inner pain and outer fury without coming off as either too weak or too acerbic. She clashes with her slightly eccentric mother Nat, played with welcome comic skill and subtle tenderness by Linda High, over their respective grieving strategies in a scene ripped right out of the living room of so many other grief-stricken families. It and so many other scenes in the show draw their power from their effortless realism, their ability to take an experience as universal yet as often repressed as grief and suddenly make it real and alive before the eyes of an audience. Mark A. Rhea as Howie, on the other hand, is the reserved counterpart of his wife who often wears her heart on her sleeve.

Rounding out the cast is Shayna Blass as Becca’s younger sister caught in the middle of it all and high school senior Patrick Joy as the boy who hit Danny whilst driving just a little bit too fast. The main and supporting cast are universal delights, with each bringing their own subtle edge to the text.

These scenes would not have anywhere close to this power if the audience was not already invested in the world of the play when they occurred. On this front, particular praise must be given to the 4Point Design Collective and the work they did on the set design. All of the events of Rabbit Hole take place in the same series of rooms in Becca and Howie’s middle class suburban home, which for the purposes of this production was rendered as a sort of half cross section with a kitchen, living room and fully functioning stairs leading to various bedrooms. It is aesthetically pleasing and impressive, particularly when placed in the still very warehouse-like Keegan Theatre where the audience feels like a natural extension of Becca and Howie’s cozy brick walled home. 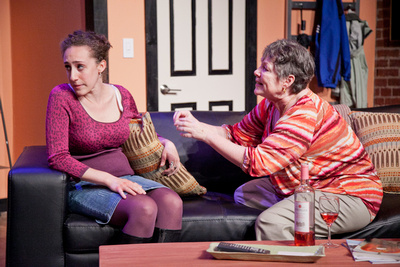 The crowning touch however comes from Danny’s room, which can be seen on the upper left of the top floor for most of the play. Still fully furnished with colorful robot emblazoned sheets, crude crayon drawings from school, and a smorgasbord of all sized toys, Danny’s room stands as a stark reminder of his constant lingering presence. As the show goes on, you start to realize that lots of the little touches of decoration and kitsch strewn about the set are also either direct or indirect reminders of Danny. His picture sits on an out of the way shelf, one of his coloring books is hidden and forgotten on the bottom level of a coffee table, the umbrella hanging next to all the coats is too small for a grown person. A play like Rabbit Hole needs a set design as careful and subtle as its text, and Rambow clearly recognizes this point.

One of the most compelling aspects of theater is that it gives us a window into the private, dealing with situations and experiences that many can remember going through but might not be able to address directly. Rabbit Hole fulfills that objective marvelously, and the cast and crew of Keegan should be proud of the work they put into making sure of that. It is a haunting production, full of pain and sadness presented in a meaningful way designed not to overload our senses with misery but to energize them with an odd sort of hope that even in our darkest times, things will get better, even slightly, with time.

Running Time: 140 minutes with one intermission.