Theatre Review: ‘Scott and Hem in the Garden of Allah’ at the Contemporary American Theatre Festival in Shepherdstown, West Virginia 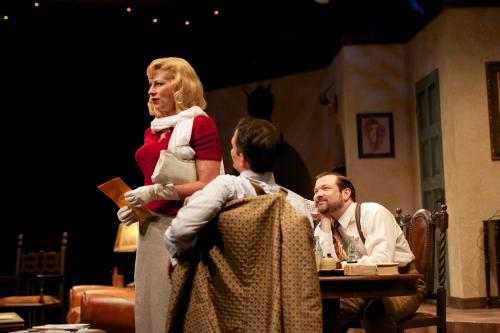 Mark St. Germain’s world premiere of Scott and Hem in the Garden of Allah is an emotionally taut, funny drama about two of America’s most famous, and important, literary figures, F. Scott Fitzgerald and Ernest Hemingway. Germain, who also directed, cuts through any tendency we might have to romanticize the two men, giving us portraits as personable as they are flawed, yet nevertheless leaving us nostalgic for a time when artists understood the difference between the pursuit of popular culture with its endorsement of status quo values and the critic of dominate culture and its moneyed aesthetic.

We catch Fitzgerald in Hollywood the middle of a July 4th celebration, a celebration from which he must refrain.  Not only has he been sober for 9 days, but he also has a deadline fast approaching—a screenplay for Gone with the Wind.  His old friend Hemingway stops by much to the chagrin of Fitzgerald’s manager Miss Montaigne.  Fitzgerald has—in his own words—become a hack for Hollywood, struggling to regain his glory days.  Hemingway, on the other hand, has just returned from fighting against Hitler in the Spanish Civil War.  He is at the height of popularity and literary power.  He is also fast becoming an alcoholic. 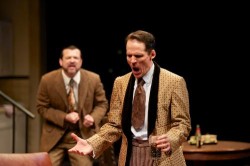 Joey Collins’ Fitzgerald is fabulous to behold.  He captures all the wit and pain of the famous writer, allowing us to experience the tortured, complicated emotional underbelly of the “gentleman” writer.  We not only witness is love for drink, and his love for Zelda and Ernest, even as he hates all three.

Rod Brogan’s Hemingway is as emotionally nuanced as Fitzgerald, but with all the braggadocio of a weekend bullfighter.  The more he drinks the more his self-confident machismo begins to crack, and we begin to see his self-doubts, his anger at women, and his true affection for Fitzgerald, which he remains unable to express without awkwardness.  Hemingway’s scenes with Miss Montaigne were particularly delightful.

Angela Pierce tackled the role of Miss Montaigne marvelously.  Looking all the blonde bombshell and with the sas of a Mae West it is easy to understand Hemingway’s impossible attraction.  Ms. Pierce, however, goes deeper, and as Montaigne’s personal drama is revealed lets the audience care more deeply for her. 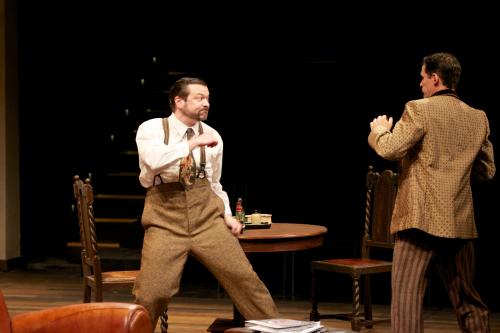 Germain’s direction of his own work was masterful, particularly the quick back and forth repartee between the characters.  With set design by David M. Barber, costumes by Margaret A McKowen, and lights by Traci Klainer Polimeni the production’s scenography was superb, capturing the style of the era with detail and design.  A special mention must be made of the fight director Aaron Anderson, as one seldom witnesses such a delightful silly brawl between two grown men.

Although In the Garden of Allah entertains, and leaves one with a sense of the men and the period, and that nostalgic feeling one might have after watching a classic film, the script and the production does not deliver as much as promised.  The surprise ending aside, with the 4th of July roaring in the background, with two of the Lost Generations most articulate writers on the boards, with Miss Montaigne’s steely demeanor offering counterpoint to both the absent Zelda and Hemingway’s psychological vixen, I yearned for a more satisfying ending.

Perhaps, however, such a want of satisfaction is just what we all deserve.

Running Time: 85 minutes without an intermission.

Scott and Hem in the Garden of Allah plays at the Marinoff Theatre, 62 West Campus Drive, Shephardstown, West Virginia, through July 28.  For tickets and info click here.