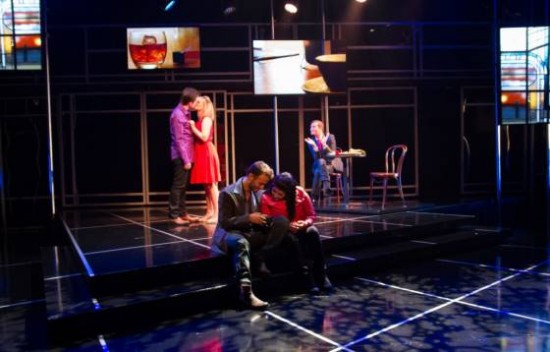 The cast of “Spin.” Photo by Teresa Wood.

We’ve all heard the story of a pop star that was on top for a while and then after a few hit songs, that was it. But what if that star made an attempt at a comeback? This familiar story is the subject matter of Spin, the first of Signature Theatre’s Siglab series in which writers can see their work performed in front of an audience with lesser production values than a full blown production. In other words it is a chance for the material to breathe and grow.

Spin is the story of Evan Peterson, (James Gardiner) a rock star whose career has been in a downward spiral. He is now the host of Idol Chatter which is an American Idol vocal competition type of show. What makes this show different is the sleazy gossip columnist Richard Riddle (Bobby Smith) who claims he is so good at his job, he can even find something on Evan. Evan swears he has been real careful throughout the years and there is nothing to hide. When Makalo (Carolyn Cole)  who is a frequent caller of the show shows up at Evan’s apartment with her young son Jesse, (Holden Browne) she tells Evan that Jesse is his grandson and that she is his daughter. Needless to say, Evan is shocked and worried that if this gets out it could ruin his comeback. To make matters worse, when Evan tells Makalo that she should pursue singing, she takes on the personae of Adanna and enters the singing competition that Evan is the host of. This is where I leave off and you go and see Spin to see how it all turns out. 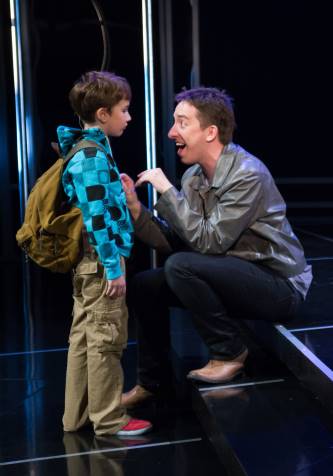 Performance-wise, the cast is first rate all the way through. James Gardiner as Evan sings and acts the role beautifully. I particularly enjoyed the scenes between him and his real life wife Erin Driscoll who plays Jesse’s teacher Allison Reynolds. They are so darn cute on stage.

Carolyn Cole as Makalo tears the house down with her Act one feature called “I Am Yours.” This is the most I’ve enjoyed Carolyn Cole onstage and what a way to impress. It might be my favorite song in the score and much of that is due to Cole’s vocal.

Other notable performances include Bobby Smith as the smarmy gossip columnist Richard Riddell shines with a razzle dazzle tap number called “Everybody Loves a Scandal.” The song really shows off Smith’s hoofing skills to full potential.

As Jesse, Holden Browne can hold his own against Gardiner in the song entitled “Wingman” in which Evan uses Jesse as his front man to find out Allison’s interests before asking her out on a date.

I can’t forget the character of Danny played by Stephen Russell Murray. He is the guy Makalo dated a long time ago and he never let go of the torch he carried for her. There is a secret with his character but I’m not telling.

Harry A.Winter as the station manager is always a pleasure to watch as is Chris Sizemore as Dave, the Stage Manager (score one for the techs).

Last but not least the ensemble is made up of some Signature regulars and newcomers who play everything from waiters to being part of a Greek style chorus that comment on the action with tight vocal flourishes.

The show is written by the underappreciated team of Brian Hill (Book) and Neil Bartram (Music and Lyrics). Why do I say they are underappreciated? A few years ago these guys wrote a two character musical called The Story of My Life, which only ran on Broadway for five performances.  At the time people thought the music was derivative of Sondheim. Well, Sondheim doesn’t write much anymore so why not have someone else like Neil Bartram jump in and write in that style.

The score of Spin ranges from pop rock to old time Broadway. This team is really talented because even though the story is one we’ve heard before, the songs and the book work very well together. 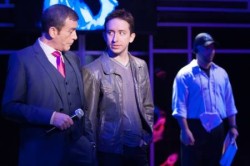 The score is played by a four piece combo under the direction of Signature’s tireless Staff Musician Gabriel Mangiante. I have it on good authority that when this shows premieres in Korea it will be fully orchestrated. That’s good because the ballads in particular will sound great with reeds, horns and hopefully strings added.

Director Eric Schaeffer and Choreographer Matthew Gardiner have done a fantastic job of giving the show some production values without smothering the material. Daniel Conway’s existing set of Signature’s last production Company was used which included multiple big screen TV’s for Rocco Disanti’s projections to be displayed. Chris Lee’s lighting crackles with lots of color when in the TV studio and then pulls back for the quieter scenes.

I appreciate how audiences want to see only the big splashy types of musicals like Miss Saigon (Signature’s next show), but when Signature presents a new musical people need to pay attention. I’m well aware that The Book of Mormon is in town but this what Signature does best and in order for them to keep doing these kinds of shows, audiences need to support them.

As with any musical at this stage of development there are things that could use some tweaking, but Spin for what it is and where it is in its development is well worth the trip. It gives you a chance to hear the work of two fresh voices in the theatre and to see a very talented cast help develop a fun new piece of musical theatre. Did I mention tickets are only $30? Oh, guess I just did.