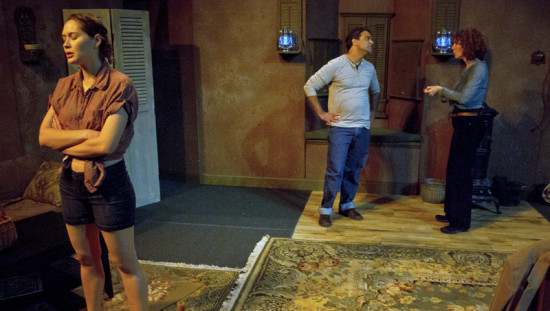 Quotidian Theatre’s production of Conor McPherson’s The Birds, an adaptation—not of Hitchcock’s The Birds—but of Daphne du Maurier’s novelette by the same title, and on which Hitchcock’s famous movie is also based, addressed that chilling question, but with mixed results.

McPherson’s script wants to explore the human darkness that must invariably erupt under such grim conditions.  The script contains frequent references to danger and dark secrets, to potential murder and mayhem.  Unfortunately, those sinister threats never sufficiently materialize, and the script’s clumsy conclusion offers little in the way of clarity. 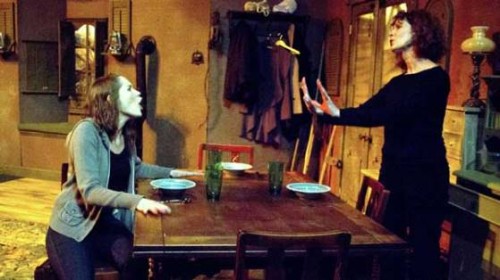 The production features Stephanie Mumford in the role of Diane, a famous writer who, when the birds attack, takes refuge in an abandoned farmhouse.  She is joined by Matthew Vaky as Nat, an apparently psychologically unstable individual.

Mumford does an excellent job portraying the successful mother who is now estranged from her daughter and in want of love.  She does not do as well when asked to play the script’s more murderous impulses.  Instead of a woman driven to kill, we are left only with an author who writes about doing so.

Vaky, on the other hand, captures the fear and paranoia associated with his character’s sudden experience of death by pecking.  Nevertheless, his character remains a mystery, as his psychological imbalance does not clarify itself, unless of course one would assert that having relations with an attractive young female were evidence of mental instability.

And sure enough when Jenny Donovan enters as the young and vivacious Julia, one immediately senses a lovers’ triangle, even though very little love or sexual tension is ever present. Donovan does an excellent job portraying a young woman doing her best to fit into a difficult situation.  As with Mumford, she is less successful summoning forth her murderous potential.

Finally, Ted Schneider takes on the role of Tierney, and he has very little trouble conveying the murderous potential.  Though only on stage for a short time, he brilliantly conveys with grim dispatch his resignation to horror, that seemed oh so fitting to his character.

One can only fault the acting ensemble so much for the absence of fear and paranoia brewing beneath the surface of this bird-apocalypse.

McPherson’s script not only has a clumsy conclusion, but structurally it suffers from an overzealous fragmentation.  Too many scenes ending in all the wrong places surely made it difficult for the actors to gain a strong sense of a throughline.  Plus, when a play begins as a battle of the people against the birds but then ends with the people in a battle against one another, even though the birds are winning, one knows the playwright has problems.

Director Jack Sbarbori does little to aid the actors in their struggle.  The fragmented script begged for fast and efficient scene changes; unfortunately, that did not happen, adding an additional 10 minutes to the production. Plus, although the set (by Sbarbori as well) is a fine, realistic depiction of an Irish farmhouse, the lighting design, though visually grim, failed to illuminate the proceedings adequately.  Perhaps it was my aging eyes, but I had great difficulty seeing the actors’ faces and discerning whatever nuances in performance they might be offering.  This dimness was particularly apparent down left and right when actors moved out of the hotspots into shadows.

Ed Moser did an excellent job creating the ever present squawk and tweet and caw of birds at the window.

Diane’s final speech clearly accentuates the ideas that McPherson’s The Birds wanted to suggest: each of us is a god, but not one of those all powerful gods capable of controlling the weather and human emotions.  Rather, we are a god capable of deciding what must be done.  In fact, in the end, we are the “deciders” of our fate.  Unfortunately, in McPherson’s world, a flock of birds totally outside of our control has descended upon us, and we can do nothing to stop them.

Unfortunately, his script does not summon enough of those inner birds to bring his story home.

Running Time: one hour and 45 minutes without an intermission.