Theatre Review: ‘The Book of Mormon’ at the Kennedy Center 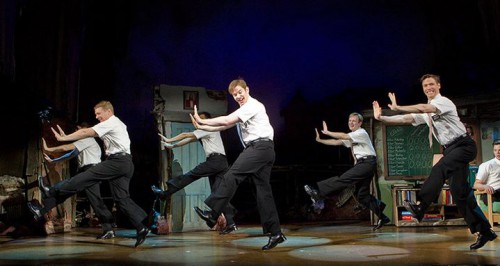 The Book of Mormon is the musical that ate the Kennedy Center.

Demand for tickets was so large in March it crashed the computer system. Traffic snarled as people stood in line for tickets. It had won nine Tony awards and smashed its own records on Broadway — for demand and for ticket prices. Even Joseph Smith couldn’t get that many followers that quickly.

Part of the excitement of seeing the work, which opened this week and will stay around for a month, largely sold out, is that to figure out what it’s all about and why it could possibly be so popular.  Also, to see if the leads are as good as the two who originated the roles in New York and have gone on to star in sitcoms earlier this year (both now canceled).

…there is a peppiness and snap to many of the songs in ‘Book of Mormon’ that appeal to the traditional musical lover.

With tunes from the naughty and upbeat puppet musical Avenue Q composer Robert Lopez and the guys from South Park Trey Parker and Matt Stone (who are not so bad at music either having had an Oscar nominated song previously), there is a peppiness and snap to many of the songs in Book of Mormon that appeal to the traditional musical lover.

The doorbell introduction “Hello” is nothing more than “The Telephone Hour” from Bye Bye Birdie, and several of the most successful tunes of the production recall that era of cheery ditties. Tight choreography of nerdy looking men in short sleeve white shirts and skinny ties adds to the glee.

The biting, insurrectionist humor, from the beginning is familiar from Parker and Stone’s South Park approach (Jesus, after all, appeared in their first cartoon as well). And their absurdist approach is sharp and funny, though it must be said, some of the biggest laughs come when they summarize actual parts of the Mormonism’s short history. 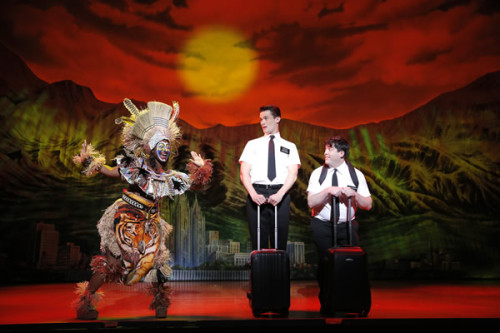 This is where cutting edge humor crashes into religious toleration and it raises the question of where the culture is now.  A critical and commercial success that destroys a religion? The place where smart aleck theatrical and creative types declare independence from those still mired in faith?

The book leaves little room for sympathy for a group painted as misguided who deny their own human urges and wrongly push beliefs on Third World villages in Africa.  And Africa’s depiction is even worse. You’d almost expect it would be populated by savages with bones in their nose, boiling explorers and missionaries in iron pots (Parker’s much lesser known first musical was called Cannibal! though it was about a domestic incident).

Instead, it’s awful, monochrome threadbare place, ravaged with AIDS and genital mutilation – a running issue in the musical.

The achingly stereotyped Africans are so backward, they use typewriters to send text messages. There is a bloodthirsty warlord with an eyepatch and a machine gun thugs. And when they get down they do a “Hakuna Matata” type song that blasphemes God, complete with middle finger salutes. I hadn’t read that in the glowing reviews.

Let me say that I may be alone in the Kennedy Center — and in all of America — to be put off by any of The Book of Mormon, but I was never the strongest “South Park” fan either. As biting as its satire could be at times, it was often followed by singing poo.

Still, its low humor has fervent fans, which explains in part the huge demand to see Mormon. Opening week, those in evening attire who think themselves theater aficionados mixed with those in T-shirts and shorts, who look like were just pried from the couch.

But like South Park, Mormon has no actual depth; its characters are little more than the paper cutouts they animate for TV. Had they aspired to the puppetry of Avenue Q there might be a closer proximity to human response.

It’s adherence to Broadway tradition — not actual feeling — that requires the couple of ballads here and there, though the most successful ones are those that aren’t serious to begin with (“Orlando”).

What you, the $250 ticketholder, wants to know is whether it lives up to the Broadway show.

So: In the leads, Mark Evans is fine in the role of Elder Price, the ambitious missionary who thinks so highly of himself, originated on Broadway by Andrew Rannells.  Alongside him, Christopher John O’Neill does all the right things as the cloying, bumbling, low-esteem sidekick Elder Cunningham, who ends up winning over the tribe by blending a lot of the Book of Mormon that he hasn’t read, with Star Wars, Star Trek, and Hobbit lore. Together, they evoke a comedy tradition that goes back to Abbott and Costello, and has been similarly cast in countless cartoons since. Astoundingly, it’s O’Neill’s first professional role, having been picked for the job in part for his perfect physical type from a traveling sketch comedy duo I’ve never heard of, The Chris and Paul Show (alas, what is poor Chris doing now?). 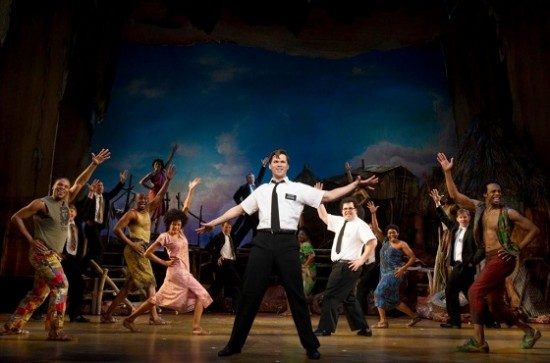 The two are fine vocally, but outshone by Samantha Marie Ware, whose African character name Nabulungi is the source of endless comic variations (the idea being: African names are so funny).  The poor woman has been making a career out of musical approximations of the continent, having played Nala in the Vegas production of The Lion King, a work so often cited in Mormon that it’s likely its primary source of African research.

What could be funny with just song and dance is enhanced considerably by the elaborate staging, from Jesus in a light-up suit to a memorable musical number from hell featuring swirling fires, horns and pitchforks and some celebrity denizens: Hitler, Jeffrey Dahmer, Genghis Khan, Johnny Cochran and dancing cups of coffee.

The musical gets just a little long as it thrashes about to see if it can either get serious for a moment or deliver a cogent message. Giving up on both, other than to say religion is better overall to be considered metaphorically than literally, they’re out with another song and dance.

The 2,300-seat Kennedy Center Opera House seems a little large for a show with such small ideas. Worse, the amplified sound that begins with a loud electric nine-piece band obscures many of the lines in songs. Audience members laughed at them anyway, which means they had better sound where they were sitting, or they had memorized the lines from either previous viewings or the soundtrack, hawked aggressively in the lobby with T-shirts and other fare.

Also selling aggressively, surprisingly, was the Mormon church itself, buying three full page color ads in the Playbill to entice playgoers to the flock, as if they’d be actually interested after this theatrical takedown. The move said as much about aggressive and naive Mormon proselytizing as the play does. They must have been working from the idea that nobody was taking in what was being said about their religion on stage — or that the sound system really was bad.

Running time: Approximately two and a half hours, including one 20 minute intermission.