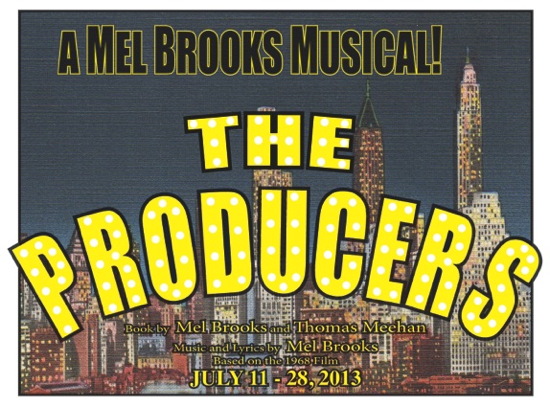 Cumberland Theatre’s production of The Producers was “shocking, outrageous, insulting…and I loved every minute of it!” Opening to a nearly full house, the cast entertained with song, dance, innuendo, and delightfully offensive humor. Has-been Broadway producers, Max Bialystock and wimpy accountant Leo Bloom become unlikely business partners when they realize there is more money to be made with a flop than with a hit.

Robby May and Rhett Wolford starred as Max and Leo, respectively. May’s Max was reminiscent of the Nathan Lane performance without being over the top. His voice was broad and expressive – truly a high-energy performer. Wolford charmed as he transitioned from timid accountant to (almost) sleazy producer. He remained committed to each action he took as he alternatively melted down into hysterics and awkwardly wooed the Swedish secretary, Ulla.

Don’t miss your chance to see this hilarious show.

Ulla was played by Kim Rowley, who impressed with her belting and dancing. Franz, the playwright and Nazi-in-hiding was played by the fearless Randy Means. A relative newcomer to the stage, Means continues to grow and delights with each appearance. Roger, also known as “The Worst Director in Town,” was played by Daniel Atwood, who gave a flawless and screamingly funny performance. His assistant, Carmen Ghia, was played by Danny Durr, who may have found the role he was meant for – a little singing, a little dancing, and a lot of physical acting. Rounding out the cast was a talented ensemble that went through enough costume changes to make your head spin! They provided high energy and emotion to crowd favorites like “The King” and “Springtime for Hitler” and the audience was kept laughing throughout the entire performance – always a good sign.

The show was directed and designed by Don Whisted. Lighting was done by Joe Thompson. Danny Durr was Choreographer and Wendy Walker was Costumer. Local theatre fans will be pleased to hear the musicians under the direction of Chris E. McCabe, whose son, Conner, lends his puppetry skills to a roost of Nazi pigeons.

Don’t miss your chance to see this hilarious show.

The Producers runs through July 28, 2013 at Cumberland Theatre, 101 North Johnson Street Cumberland, MD 21502.  Performances are Thursday through Saturday at 8:00 and matinees on Saturday and Sunday at 2:00. Reservations are strongly recommended. For tickets call the box office at 301-759-4990 or click here.