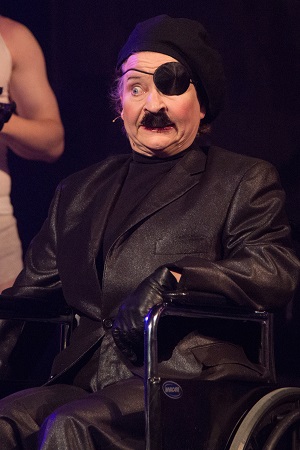 Studio Theatre’s production of Richard O’Brien’s The Rocky Horror Show explodes into the comparatively calm streets of Washington, D.C.  Mitchell Jarvis gives us a Frank N. Furter who is so maniacal, so fervent and so passionate that one cannot help but question his humanity, even without the sci-fi B-movie themes of the show..

In The Rocky Horror Show, two clean-cut lovebirds, Brad Majors and his fiancée Janet Weiss, suffer an automotive breakdown on their way to visit an old college professor.  Walking in the pouring rain, they seek help at a castle they happened to notice a few miles back.  There is no way they could know (or even comprehend) what they are about to walk into.  The castle is inhabited by alien transsexuals from the planet Transylvania, and the apparent leader, Dr. Frank N. Furter, is about unveil one of his greatest experiments: assembling and reanimating a human body.

Rocky Horror features well-known, toe tapping songs,  “Dammit Janet,” “Sweet Transvestite,” and “Time Warp.”  This cult classic is usually as much fun for the audience as it is for the actors.

The stage version is still a lot of fun, loud and bawdy so, if you like that kind of thing (and I do), then don’t miss this production.

Studio Theatre’s production is on one hand incredibly well done, but on the other hand is missing something that made The Rocky Horror Show so notorious – it’s imperfections.  Is it possible to make  one of the quirkiest, raunchiest theatre shows in the world  so over-produced and slick that most of the original rawness isn’t there?  Is a B-movie with high production value still a B-movie?  While I relished in Studio’s production as if it were an exquisite pastry, I found myself wondering where the Twinkie went. 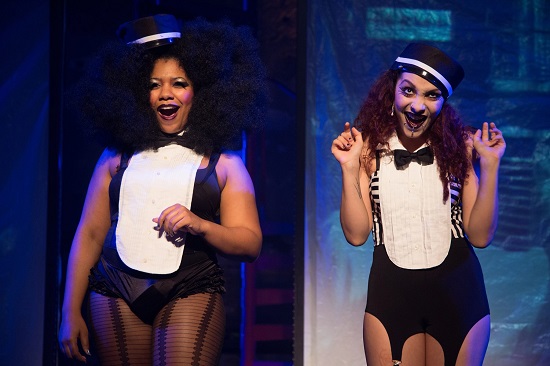 With that being said, the entire cast brims with energy and obvious passion for their roles.  In addition to Jarvis as a cocaine-sniffing Frank, standouts in the cast include Matthew Delorenzo.  He is fantastic as transvestite Columbia, who is Frank’s ex-lover and Eddie’s current one.  Delorenzo makes a beautiful woman, and he plays Columbia with a sweet vulnerability and a strong heart.  She is perhaps the most human of all the characters, including Brad and Janet.  Sarah C. Marshall deftly commanded the stage as The Narrator and also hilariously portrayed Dr. Scott as a gruffer version of Dr. Strangelove.

I am a big fan of everything Michael Bobbitt does, and his choreography does not disappoint.  He makes good use of the entire theatre and the strengths of the actors.

Studio’s Rocky Horror does not involve any of the audience participation activities that helped make the movie version a cult classic, such as shouting out lines or throwing items on the stage.  The stage version is still a lot of fun, loud and bawdy so, if you like that kind of thing (and I do), then don’t miss this production.