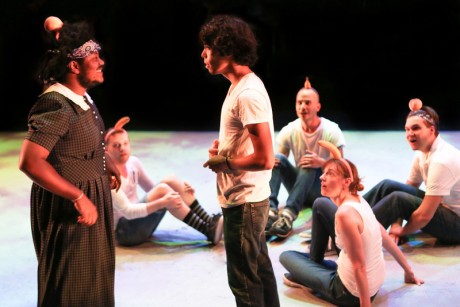 The cast of ‘The T Party.’ Photo by Melissa Blackall Photography.

While political pundits and evangelicals debate about same sex marriage and all other issues pertaining to homosexuality, director and playwright Natsu Onoda Power taps into the heart and humanity of DC’s LGBT community with her new work, The T Party. Currently running (ever so briefly) at Forum Theatre, this play is an experimental and interactive commentary on gender transformation and is perhaps the venue’s most unique production of the season.

‘The T Party’ is the most original and thought-provoking work I’ve seen all season.

The “start” of The T Party lives faithfully up to its title as patrons are whisked through rainbow streamers and led into one of several whimsical parties a la a scene out of Alice in Wonderland. Whether a bridal shower, a kindergarten birthday party, or a karaoke jam, each quirky mini-bash light-heartedly touches upon a topic currently affecting the gay community. It’s a fun and clever pre-show teaser. By the time the actual play begins the audience is well-prepared for the highly unconventional main event.

Not at all a traditional narrative, The T Party is instead a non-linear grab bag of fast-paced vignettes. The scenes run the gamut from farcical to solemn and address a myriad of subjects including gender expression, cross-dressing, and sexual orientation. For example, Betsy Helmer and Allie Villarreal wistfully retell the story of a budding bisexual relationship between two college co-eds while tangoing seductively to a sort of campy stock muzak. Both women have great comedic timing yet also relay the underlying sadness of the moment. Later, the play turns more satirical as Nehemiah Markos while donning a June Cleaver inspired frock, teaches a class of eager students (portrayed by the ensemble) about all things LGBT, ie. the non-traditional family. Yes “some have two mommies.” Markos’ delivery is perfectly tongue-in-cheek. Think SNL parody, only better.

The remaining stories are a varied lot, but all are a gentle education on the complicated nature of self-identity. Jonathan Feuer and Rachel Hynes are particularly compelling and intense during a “chat room” scene between a woman and a cross-dressing heterosexual man. The taut dialogue between the two poignantly articulates said man’s struggle to reconcile his masculinity with his chosen mode of self-expression. His angst is palpable. It is a beautifully and intelligently scene written by Onoda Power. And one more thing about Rachel Hynes; she literally does it all! Throughout the play she is kind of everywhere at once, portraying a supportive friend one minute, a dancing bear the next and later a Jagger inspired rocker. While the entire cast showed up, stamina and confidence in tow, kudos to Hynes especially for displaying her obvious versatility.

As for the rest of the show, expect message-laden musical interludes, self-affirming spoken word poetry as well as cool, fun dance breaks (choreographed by Franscesa Jandasek). There are also animal costumes, men dressed as women, women dressed as men, songs about unicorns and lots more hallucinatory sundries. It’s all very befitting of course, given the play’s upbeat nature.

Lending to this celebratory tone is The T Party’s highly stylized design. Costume Designer Frank Labovitz balances the simple and the absurd nicely. It’s white t-shirts and jeans for the characters one-minute and giant panda costumes the next. Lighting Designer Zachary A. Dalton gives the show its rave-like quality with an abundance of constantly roaming colorful light. Likewise, Projection Designers Sophia Lewin Adams and Alex Leidy transform a simple white stage into what feels like the dance floor of a techno club. Words and images move around the actors at a frenetic and energizing pace. Thomas Sowers’ sound design is hip and modern and always in concert with the narrative’s many changing moods and emotions. The collective end result is somehow pleasantly dizzying.

Artistic Director of the Studio Theatre, David Muse has been quoted as saying that Natsu Onoda Power is “doing some of the most exciting work in D.C.” and I couldn’t agree more. The T Party is the most original and thought-provoking work I’ve seen all season. It is timely, sensitive and respectful of the LGBT community. Most importantly, it dares you (without preaching) to be a more compassionate, educated, authentic, and empowered human being.

Running Time: 2 Hours with no intermission.