From left, Thomas Peter as Jeff, Anastasia Sophia Herne as Heidi, Angela Sullivan as Susan, Christopher Overly as Hunter and Laura Brady, seated, as Mary.
Photo by Bud Johnson for The Baltimore Sun.

Another in the “let’s put on a play” tradition of American musicals, “[title of show]” takes a more meta approach: a musical about writing this very musical.

The 2004 work, submitted by Jeff Bowen and Hunter Bell to the first New York Musical Theatre Festival, is largely a transcription of the wittier portions of their own conversations about writing a play, which are also put to song. Because they didn’t want it only to be their back and forth, they also insert a bit about following dreams and tamping down self-doubts, which they term as vampires.

As currently presented at the Annapolis Summer Garden Theatre in a production directed by Rachael Murray, it’s an amiable enough endeavor to consider under the stars, especially in the songs that poke fun at the structure, song style and patterns of most American musicals.

…some strong voices in the cast

“It’s the opening song,” they begin, stating all the key changes coming up like landmarks along the road.

By lampooning such conventions, its creators imagine they are rising above them. But all they end up doing is show the bones of the operation while obsessing over the details of writing, how obscure they want their references to be and even the bureaucracy of sending in their work for consideration (in a song called “Filling Out the Form”).

While it may be delightfully familiar to close students of musicals or those who have trod the boards and performed, to outsiders it may seem an exceedingly narrow and self-centered worldview.

Still, there are amusing moments, as when a rundown of failed musicals is accompanied by a screen showing their old Playbills (does anyone remember “Got Tu Go Disco” or “Smile”?). 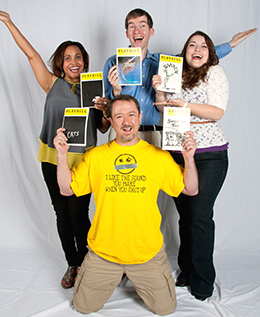 There are also some strong voices in the cast, particularly from the two self-proclaimed “Secondary Characters” (from the title of a standout song), played by Anastasia Sophia Herne and Angela Sullivan.

That Sullivan performs in a foot cast says something about being a trouper, but is also quite distracting most of the night.  (Another distraction was her malfunctioning microphone, spitting static at the start of the show. )

In the leads, Thomas Peter was more credible a theater wannabe than Christopher Overly, who was more believable as someone who wanted to sit around and watch reality TV.

Each had a passable singing voice, but things went awry whenever they tried to harmonize. This was no small point – it made the climax to every one of the ditties go sour.

As witty as the playwrights thought their material was, the biggest laughs were won by the person with the fewest lines – Laura Brady on the keyboards. Brady, who is also musical director, obviously knows a thing or two about timing.

[title of show] was also marred structurally. While it built to the two completing their musical and sending it in, and reached a climax when it was accepted, the show kept going way too long after that, as they met important producers, prepared an off-Broadway production, battled rewrite and tried to get it on the Great White Way, singing about it all along.  It was updated so much and for so long, you almost expected a song about finally reaching Annapolis.

At least they saved a couple of the strongest songs until the end, with Herne soloing on “A Way Back to Then” and the climactic “Nine People’s Favorite Thing,” its idea being that the playwrights would rather have their work be nine people’s favorite thing than a hundred people’s ninth favorite thing.

As presented in Saturday’s performance, though, it seemed the nine were all on stage or helping stage the show; the (less than) 100 made up the audience.  Rarely has there been a crowd that laughed less at a comedy or failed to clap even the songs meant to be barn-burners.

Befitting its tourist locale, the Summer Garden Theater is presenting  the clean version of “[title of show],” which made one wonder in the silences, what there was in the more risque version that could have spiced things up.

[title of show] (clean version) runs through July 20 at the Annapolis Summer Garden Theatre, 143 Compromise Street, Annapolis. Tickets are available through 410-268-9212 or here.