Through Lines: Is the Capital Fringe Festival Really So ‘Fringe’ After All?

In Webster “Fringe” means “a : something that is marginal, additional, or secondary to some activity, process, or subject <a fringe sport> b : a group with marginal or extremist views” and c : a Theatre Festival happening in Washington, DC, and around the country and the world where producers with moderate-to-no-income come together to present a culturally democratic theatrical event.

And DC’s non-juried theatrical happening is the most culturally democratic theatrical event imaginable.  If you have the will, and the script, and can scrape together the entrance fee, you can show yourself to the world.

How can something that is so representative of all of Washington’s theatre community (and beyond) be considered so “fringe”?

Last year I covered the Fringe Festival, warts and all—a delightful array of styles, dada-like expressions of hope, and an abundance of talented, skilled performing artists.  This year I’ll cover it again, but I’m also producing a show, Legal Tender; so I am reminded first hand of the Fringe’s fierce insanity.  While The Fringe will not begin for several more days, I can already feel the presence of its community of creative forces, all coming together for three weeks of true sheer madness.

These folks do not constitute the margins of DC or America.  They do not constitute the extreme views, the radical theatrical outsiders banging on the doors of the entertainment industry.  The people who participate in the Fringe Festival are the majority of theatre and performing artists all around the country.  They are the artists who are piecing it together anyway they can, celebrating their art even if that means sacrificing downtime, or hanging out time, or time making extra cash. 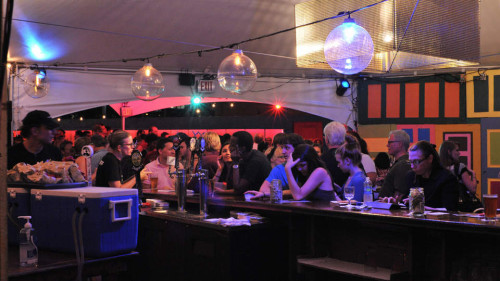 The Fringe Festival has it all.  To be sure, it has its fair share of comedies—49 different shows—and solo performances—32 in all; but the Festival also has 46 dramas and 13 dance or physical theatre performances, plus clowning and puppetry and burlesque and stand up and …  In other words, if the style is out there somewhere, it will be there at the Fringe.  Heck, you might even see a few things that you’ve never seen the likes of before (and won’t see after).

In other words, the artists and their shows at the Capital Fringe Festival are the truest and most honest expression of what it means to be a performing artist in America today.  And there are a lot of us, as the 128 shows and their 1000 plus artists and staffs on view starting this Thursday will testify to.

So if you want to see the best, and the grittiest (and maybe even some of the worst) of what DC has to offer in the way of theatre, go down to the Fringe between July 11 and July 28, 2013.  For information about the Fringe Festival and for tickets click here.