Through Lines: So You Thought the Fringe Festival Was Only for the Zanies? 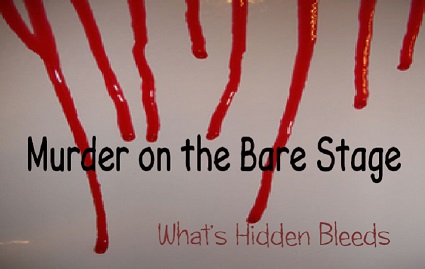 To be sure, with a festival that has “Fringe” in the title, and with shows called Crime Buster Blast-Off 3000 and Disco Jesus and the Apostles of Funk and Ok Stupid’s Secret Math Lab, no one would blame you for thinking that the Capital Fringe Festival was only for the off-the-wall twenty-somethings out to turn the theatre world into a millennial bacchanal.  Not all of Fringe is for the wacky and x-rated, however; in fact, some of Fringe is for the literary and murder obsessed.

Murder on the Bare Stage, presented by Magus Magnus’s SiGiLPAL (Sui Generis Literary Performing Arts Lab), is just such a show.  Conceived by Poet Magnus and actor Steven Mead, and combining original text by Magnus with classical texts from Dickens, Poe, and others, Murder on the Bare Stage explores what Magnus calls the “psychology and passion of violent crime” and its lingering after-effects. 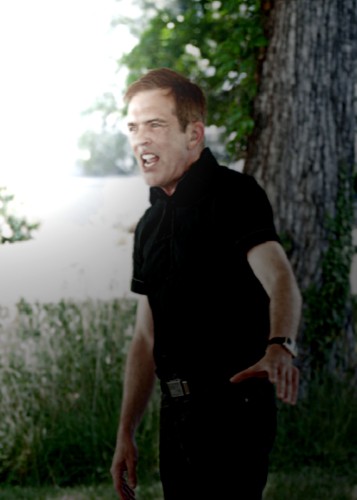 The use of “bare stage” in the title is indicative of the style of the piece.  The classically trained Mead, who performs the piece, does so without the aid of sets or props, relying solely on his actor craft to place the world of the play before him and into the audience’s imagination.  This “theatre of the imagination” requires, if you will, the audience to participate in the imagining of the piece.  Unlike a more elaborate staging, which permits an audience to passively receive the theatrical spectacle, Murder on the Bare Stage requires Mead, the performer, to work “in cooperation with the audience to foster the imagining of the piece.”  Although in this age of high tech simulation and special effects one might think that the unaided human imagination simply cannot compete, Magnus insists that the combination of the master actor, the charged language of literature, and the power of a communal imagining “immerses the audience in the inner and outer worlds of the characters, and so becomes deeply involving, and visceral.”

The piece consists of a number of different pieces all united through their exploration of murder and its effect on the human psyche, as well as on the linguistic fabric maintained by the texts themselves.  Although many of the monologues are from well known authors like Edgar Allan Poe, Charles Dickens, and W. S. Gilbert, one is immediately struck by the stylistic variety and tonal differences presented by those three famous writers alone.  Those shifting perspectives and tonal changes present one of the many challenges Magnus faces as he and Mead work to bring literary text to life on a bare stage. 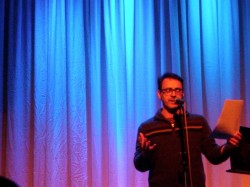 The other great challenge is as Poe famously wrote in the Tell-Tale Heart: “And now have I not told you that what you mistake for madness is but over-acuteness of the senses?”  Without the aid of the tangible, with only the human imagination and language as the vehicles of transport, the actor, in this case Mead, must make real only what the five senses can experience.  Otherwise, madness indeed might become what we all mistake as true.

The two artists debuted Murder on the Bare Stage at DC’s community art center BloomBars in 2012, on appropriately enough Halloween.  And, as Magnus relates, it was their positive response to that performance that encouraged the duo to bring the show to the Fringe.  That decision most clearly has made the Fringe all the richer and as one of Murder’s authors penned “a dangerous stretch.”