‘A Quick 5’ with George Daugherty 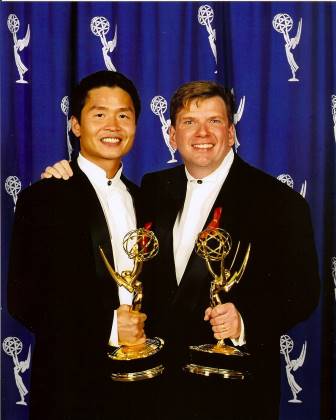 George Daugherty is the creator and conductor for Bugs Bunny at the Symphony II, which is playing tonight and tomorrow evening at Wolf Trap. He is one of the classical music world’s most diverse artists.   In addition to his 30 year conducting career, which has included appearances with the world’s leading orchestras, ballet companies, opera houses, and concert artists, Daugherty is also an Emmy Award-winning / five-time Emmy nominated creator whose professional profile includes major credits as a director, writer, and producer for television, film, innovative and unique concerts, and the live theater. He has conducted major symphonies all over the world to sold out audiences.

In 1990, Daugherty created, directed, and conducted the hit Broadway musical Bugs Bunny On Broadway, a live-orchestra-and-film stage production which sold-out its extended run at New York’s Gershwin Theatre on Broadway, and has since played to critical acclaim and sold-out houses all over the world. The Bugs Bunny symphonic concert tradition is again in full swing as Daugherty and producing partner David Lik Wong are in the middle of a world wide tour with Bugs Bunny at the Symphony II. Here is a chance for the whole family to enjoy a night out with some classic Warner Bros.cartoons. It is also a chance to introduce the kids to the world of classical music which was a common theme in many of Bugs Bunny’s cartoons (remember The Rabbit of Seville?). On top of that you get to see George Daugherty, a driving force in the world of classical music, doing what he loves to do. When an artist like George Daugherty is passionate about their work, everyone benefits.

We had a piano in our house.  When I was about 4 years old, I climbed up on the bench, and starting playing.  I loved making music – even when I couldn’t.  Luckily for me, there was a Juilliard-trained pianist who lived in our small town in Indiana.  She was my piano teacher from the age of 5 to the age of 18, so that was fantastic luck.  I also had amazing band and orchestra directors/teachers in school.  And most importantly, my parents – even though they were not musicians – took me to so many performances.  They would drive me the 40 miles into Indianapolis, to hear the Indianapolis Symphony Orchestra as a kid.  (My first concert, a kiddie concert featuring Captain Kangaroo, which I will never ever forget!)  Musicals, operas, theaters – whatever was coming to Central Indiana, they would take me.  And of course, there was my love for Looney Tunes, which I watched on television.  I knew the music was very unique and very special from the getgo.  (As most people do . . . Looney Tunes have an instantly recognizable orchestral soundscape!)  So, all of that combined to make me love not just classical music, but all music, at a very early age.

What was the inspiration for the Bugs Bunny on Broadway and Bugs Bunny at The Symphony programs?

I had two very strong reasons behind my desire to create Bugs Bunny on Broadway, which was the original concert, and the precursor to Bugs Bunny at the Symphony — all of which we have now been doing for 24 years.  The first stemmed from my great memories of these cartoons from my own childhood.   And my second reason was a really strong desire to create a concert which pulls people into the concert hall who might not otherwise come . . . and that has been the case throughout the 24-year history of the project . . . this concert, just like the cartoons, has also introduced a lot of ADULTS (as well as kids) to the incredible magic of the symphony orchestra, and then they come back for what we like to call ‘normal’ concerts.

But how did I think of doing it as a concert?  Well, it was almost an accident.  I mean, I have been referred to in newspaper interviews as “cartoon nut George Daugherty” or “animation aficionado George Daugherty” – but the truth is that although I loved these cartoons as a child, I did sort of forget about them in my teens, and went about the business of studying to be a classical musician.  And then in the 1980’s I finished up my conservatory training and went about establishing a “serious conducting career.”  By the time I was in my mid-20’s, I was conducting at places like the Munich State Opera and American Ballet Theatre, and I wasn’t thinking AT ALL about cartoons!

You also have to remember that in the early 1980’s, DVD’s hadn’t been invented, absolutely nobody had a home computer, there were no satellite dish networks, audio CD’s were barely out there, people were still playing vinyl, cable television was in its infancy, most people still had an antenna on their roof and hardly anybody even had a VCR.  (Hard to believe.)  So unless you got up on Saturday morning to watch these cartoons on television, they weren’t very visible during this decade.  They weren’t very available, because technology was nothing like it is now.

One night, however, I was visiting with some friends who were animators, and THEY had a VCR!  And they had some of the first-released Bugs Bunny commercial VHS tapes.  Well suddenly, I was seeing “What’s Opera, Doc?” and “The Rabbit of Seville,” and all these masterpieces for the first time since childhood, but now as an adult conductor and musician, I realized that they had been created by some formidable geniuses.  And for some inexplicable reason – some people actually called it “insane” — I wanted to perform them.  Live.  In front of an audience.

So that’s what drove us to create the concert. But obviously, we couldn’t have done it without the support, assistance, and enthusiasm of Warner Bros.  And Warner Bros. was extremely enthusiastic about this production from the moment we proposed it to them. They made it possible for the dream to become a reality.  I think they realized that it would celebrate their brilliant cartoons . . . cartoons that were such a part of their history . . . in a very unique way. They have been our partners from day one.  Among countless millions of animation aficionados the world over, the Warner Bros. Studios cartoons are in a class by themselves, and so for us to get a chance to work with this material, to reconstruct and restore them for live performance – to actually “perform them” for cheering audiences – has been the project and opportunity of a lifetime. 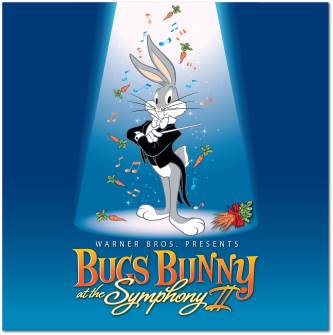 What do you think the trick is to get today’s kids interested in classical music?

Start them early.  Make it a part of their lives.  Make it relevant to their lives.  Pick programming, to start, that is “kid friendly.”  (So, “Bugs Bunny” or “Peter and The Wolf” to start with, rather than the Mahler Resurrection.)  Introduce them to musical instruments.  Make it fun, don’t force them.  Play recordings of classical music for them when they are young, so it is an actual part of their everyday life, not some big formal deal you introduce them to later.  Take advantage of your local symphony orchestra’s young peoples’ concerts and other special activities – all orchestras have great programs for kids, and not enough parents take advantage of them.  Make the performing arts as much a part of your family’s life as all the other activities you do.

What is your favorite Bugs Bunny cartoon?

I’m not supposed to have a favorite, since I work with so many different cartoons from the Looney Tunes world.  But I do have to say that I have a special place in my heard for “What’s Opera, Doc?” and “The Rabbit of Seville.”  When it comes to combining the worlds of classical music and animation, these two cartoons, especially, are pure genius.  Nobody was better and this genre than