BPF Review: ‘Countdown to the Happy Day’ at Heralds of Hope Theater 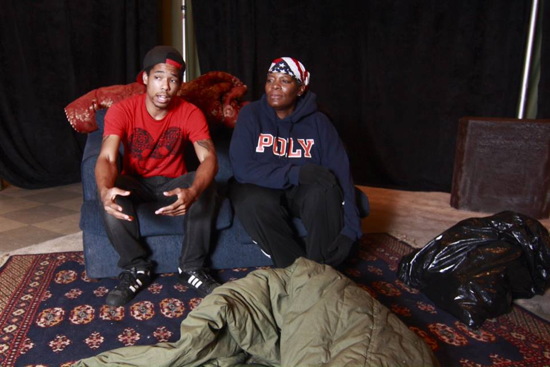 Countdown to the Happy Day by Thomas W. Stephens, currently playing at Heralds of Hope Theater, is a profound and startling look at the ways that grief and poverty impact people. Two very different people, a homeless war veteran named Gerti (Terry Johnson-Bey) and a lonely street kid named Cervin (Paris Alexander) meet on the street and form a unique bond based on caring and mutual sorrow. As co-director Percy Thomas states, the play provides remarkable “insights on urban dynamics.”

Prince No-Ra’s set design is really interesting–the play has up to four settings: Gerti’s sidewalk haven, a church, Cervin’s apartment, and a bridge, making transitions difficult. The set presents an authentic visual experience, right down to Gerti’s shopping cart from Food Depot and a metal trashcan. The bridge is littered with refuse, while Cervin’s apartment is clean and almost chic, featuring a couch and a flat screen TV. My only critique is that there was an unusually long blackout owing to the need to replace Gerti’s lair with the church chairs. Lighting design was minimal but effective, alternating spotlights.

It is at times sad, funny, frightening, and awful, but always insightful and remarkably well-done…

It is difficult to carry a 90-minute play with only two actors, but Alexander and Johnson-Bey are brilliant, well coordinated and emotive. The production is emotionally devastating, dealing with difficult and tragic topics with an authenticity and a subtlety rare to even Broadway productions. Gerti’s devastating past, her post-traumatic stress, her fits of rage and sorrow are all presented in the midst of urban poverty, while Cervin’s naivety, his grief, humor and kindness lend a little bit of light to a very dark place. 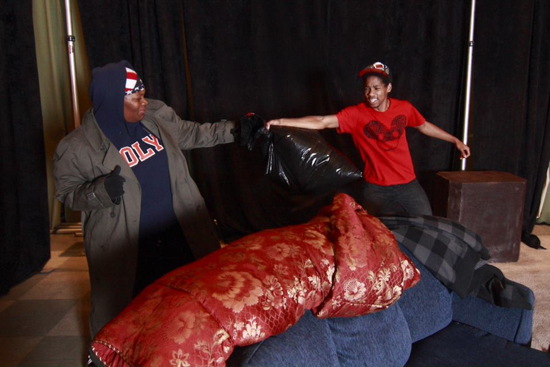 Countdown to the Happy Day addresses social dynamics rarely seen in popular culture outside of crime dramas like The Wire. It is at times sad, funny, frightening, and awful, but always insightful and remarkably well-done, kudos to directors Thomas and Margaret Locklear for handling such difficult topics with such aplomb.

Countdown to the Happy Day, a Heralds of Hope Theater production and part of the Baltimore Playwrights Festival, is playing at Sojourner-Douglass College, 200 N. Central Avenue, in Baltimore, MD, through September 1, 2013. A portion of the play will also be presented at the Kennedy Center on September 2, 2013. For tickets click here.