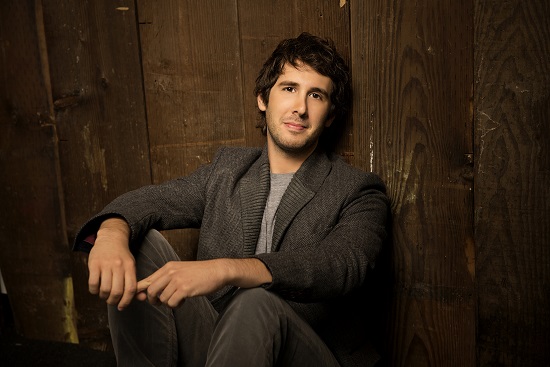 Classical crossover singer Josh Groban recently made his debut at Wolf Trap to a sold-out crowd. Groban spoke to the audience about his debut at Wolf Trap saying, “This is a real treat for me to be here.  It is an absolute honor for me to be here tonight.  I’ve been dreaming about playing this venue for so long.  There is such a rich history here.  There is such an amazing cultural tapestry that has been woven here throughout the many years this place has been here.”

In 2001 songwriter and producer David Foster took Groban under his wing, helping to propel this young artist to fame, selling more than 24 million albums worldwide.  2003 was a big year for Groban when David Foster decided to produce the song “You Raise Me Up” for his second album Closer.  Perhaps one of Groban’s most popular songs to date, his version made it to #1 on the Billboard adult contemporary chart and was nominated for a 2005 Grammy award.

At Wolf Trap, Los Angeles born Josh Groban opened the concert with the song “Brave,” the first single from his latest album All That Echoes which features a mix of covers and his own creations.  From his biography on his website Groban talked about the song saying, “‘Brave’ represents one of the higher energy songs, but never felt out of place to me. Never felt this was out of my world. It represents the kind of energy I had on stage. I would want the lights going crazy and the band rocking out and something that blows the hair back and moves me.”

A low point in the concert was the question and answer period with the audience.  On a social networking site audience members were able to submit questions and Groban would answer a select few.  The ridiculous questions chosen for him included, “If you were reincarnated as a woman, what would your name be and what would you be like?”  Groban admitted that he did not read what questions were chosen for him prior to the concert because he wanted his answers to be spontaneous.  The problem with the Q&A was that we didn’t learn much about Josh Groban and it stopped the flow of the show.

My favorite song from his 6th and latest album All That Echoes is Stevie Wonder’s “I Believe (When I Fall in Love it Will Be Forever). ” The power and energy of his version cannot be understated.  As with all of his songs, Groban’s deep textured baritone voice massages the mind and soul.

Of course audience’s would have been disappointed if he didn’t sing “You Raise Me Up” which was a fitting way to help wrap-up Groban’s debut concert at Wolf Trap. The final treat of the evening was hearing what Groban said was one of his favorite songs, “Smile” written and composed by Charlie Chaplin.  Chosen as his final encore, this song proves that if you write good lyrics and good music that it can stand the test of time.

So what is in store for Josh Groban’s future?  Josh Groban is expanding his talents into acting which is no surprise considering he originally studied acting, including attending the Los Angeles County High School for the Arts.  He has had a role on TV’s The Office, appeared in the film Crazy Stupid Love, and a cameo as himself on CSI New York.  In the next few years Groban plans to dedicate a lot of time to acting on stage.  It is clear he feels comfortable on stage and I look forward to seeing him develop in all of  his future projects.