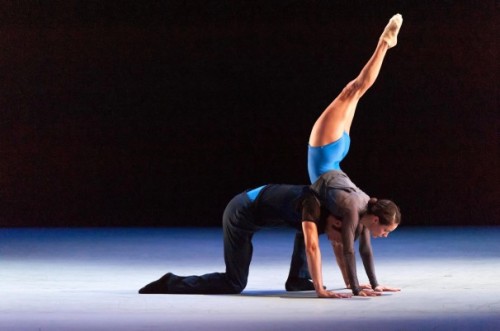 The road for professional dance has never been well paved.  As the 21st century rolls out, dancers and choreographers are constantly searching new ways to combine classical ballet and contemporary dance while still appealing to present day dance aficionados.  Not surprisingly so, this sweet spot of intersection is difficult to find.  Aspen Santa Fe Ballet, however, does it with ease.

I would not miss a chance to see them perform again.

This contemporary ballet company, founded in 1996, has made it traditional to commission and present new works from upcoming artists, resulting in a constant flow of edgy and innovative pieces that pull together principles of contemporary dance and classical ballet.  This much was made clear this past Wednesday at ASFB’s one-night-only performance at Wolf Trap, which showcased three newly commissioned works. 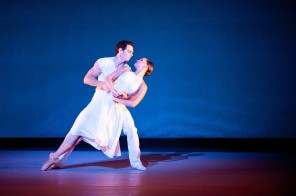 In my opinion, the opening piece Fold by Fold, choreographed by Norbert De La Cruz II, was the strongest of the evening.  De La Cruz’s choreography presents us with an impeccable balance of styles, moods, and aesthetic.  His innate ability to direct the eye was demonstrated in his strategic staging and use of synchronized versus isolated pairings.  Dancers Craig Black, Katherine Bolanos, Sadie Brown, Paul Busch, Peter Franc, Emily Proctor, Seia Rassenti, and Joseph Watts on top of giving wonderful performances, were never crowded on stage.

There was also something to be said about the works clearly motivated motif. Set to a vivid classical score, commissioned from Michael Gilbertson, the work reminded one of a late summer afternoon in the forest.  This theme was furthered through the costumes designed by Marion Talan, which were of a dark brown, buckskin texture.  With male dancers in long tailcoats these modern and simple designs were still reminiscent of classical ballet attire.  Graceful curves were contrasted with many moments of sharp punctuated movements.

The pieces that followed, Last, choreographed by Alejandro Cerrudo, and Like a Samba, choreographed by Trey McIntyre, also showed high quality performances.  Most notable within Cerrudo’s choreography were his deeply romantic duets using a characteristic glide, feigning flight across the frictionless floor.  The work, however, was awkwardly segmented with the three parts feeling incohesive in theme.  This was in part because of the greatly contracting musical score, but also because of the flitting between light and romantic and dark ominous moods.  McIntyre’s Like a Samba was a playful mix of genres, displaying beautiful performances from dancers Paul Busch, Samantha Klanac Campanile, Peter Franc, Nolan DeMarco, and Seia Rassenti.  This fun composition used a musical score from Astrud Gilberto, including the infamous “Girl from Ipanema,” and also presented with vivid lighting design by Michael Mazzola and Costumes from Janet R. Elam.

Aspen Santa Fe Ballet has become a well-known name in the dance world, and rightfully so. Their style is utterly unique, and presented with class, professionalism and artistry.  I would not miss a chance to see them perform again.