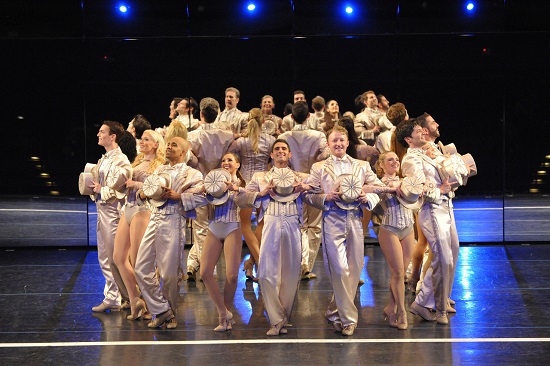 The cast of ‘A Chorus Line’ at Olney Theatre Center. Photo by Stan Barouh.

It may have been 1975 with the birth years of the dancers auditioning for a fictional Broadway musical ranging from 1942 to 1955, but the competition for such chosen roles by “gypsies,” as show dancers are described, is as fierce today as it was then.  Many talented performers, few openings are available. That hasn’t changed over the years.  The Olney Theatre Center, acclaimed for its lusty musicals, succeeds with its entertaining re-creation of the timeless hit musical A Chorus Line, which humanizes these seemingly anonymous dancers.

Veteran Stephen Nachamie, in choreographing and directing, stays true to the original production that featured music by Marvin Hamlisch, lyrics by Edward Kleban, a book by James Kirkwood, Jr. and Nicholas Dante and originally choreographed by Michael Bennett.  In doing so, Nachamie helmed a tight production on a mostly bare stage that boasts a diverse array of talented dancers, singers and actors that performed some of the best-known songs on Broadway.

Olney’s production of ‘A Chorus Line’ features a very attractive and talented bunch of dancers and actors under the expert direction of Stephen Nachamie.

The original version of A Chorus Line ran for 6,137 performances and is the sixth longest-running Broadway show ever.  It spawned numerous touring productions and revivals, captured 12 Tony Award nominations and won 9 of them, in addition to the 1976 Pulitzer Prize for Drama.

The music, dancing and dialogue (largely monologue) make the show endearing and timeless and explains its enormous popularity.  Each of the 17 dancers are called upon to not only flaunt their moves individually and in groups in a strenuous audition but are also asked (um, told) to describe their life’s experiences to the largely off-stage authoritative director, Zach (played commandingly by Carl Randolph).

Never for once imagining they would be required to reveal their inner secrets, confessions and self-doubts to the director, much less to their fellow competitors, to vie for the limited number of openings (4 boys and 4 girls) the gypsies opened their souls with remarkable candor.  I mean, how many performers attend an audition and admit they can’t sing?

Talking straight ahead to the audience (but simulating addressing Zach in the rear of the theater) and responding to his questions bellowed from a microphone, these dancers tell their stories amidst a series of musical numbers including a montage.  Though some of the soliloquies slow the pace down in spots, they are mostly fun and unique and an integral part of the show.

You have as examples Don, the married man who worked in a strip club (Derek John Tatum); Connie (Momoko Sugai), a petite older Chinese-American who still believes in eternal youth; Greg (Steven Sofia), a Jewish gay man who describes his first experience with a woman; and Mark (Joseph Tudor), the youngest at age 20 who hilariously told his priest he thought he had gonorrhea.

Paul (Bryan Knowlton) had one of the more emotional stories.  The Puerto Rican tells of his earlier experiences growing up gay and his involvement in a drag act.  His parents learned of his orientation, and his relating their reaction was a particularly poignant part of the show.  Paul breaks down and Zach goes on stage to comfort him.  Mr. Knowlton had performed the same role in the original Broadway revival in 2006.  In the current iteration, Mr. Knowlton gives a moving performance.

Then there is Diana (Jessica Vacarro), also a Puerto Rican who delivers the knockout number “Nothing” and later the classic “What I Did for Love.”  The latter follows a mishap to Paul, who re-injured a knee during a dance number, and the other dancers on the line experienced the sudden horror that their career could also end in a flash.  Few had alternative plans.

Cassie, one of the significant characters in the production, is played by Michelle Aravena who performed in that role in the original Broadway revival.  She and director Zach once had a romantic relationship, and when Zach became more involved with theatre than with her, they split.  Zach believes that Cassie is a feature-caliber performer, not merely a member of the chorus.   When he characterized the other dancers as machine-like, she defended them with the line, “I’ll take chorus, if you’ll take me!” 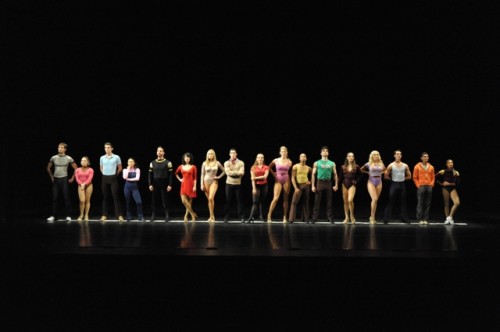 The cast of ‘A Chorus Line’ at Olney Theatre Center. Photo by Stan Barouh.

Ms. Aravena also elegantly performs a solo dance (“The Music and the Mirror”) as an angled mirror upstage presents images of four of her dancing smoothly around the stage in a variety of moves donned in a sleek red dress.

Val, a fun character played by Jennifer Cordiner, does a splendid job as a potty-mouthed dancer who needed plastic surgery to “enhance” her looks to get dancing jobs.  Her rendition of “Dance: 10; Looks: Three” is performed admirably.

The ensemble, in the meantime, learn the steps and lyrics to “One,” arguably the most iconic of the show’s numbers.  The final eight chosen dancers are announced, and those failing to make the cut exit the stage deflated.

For the show’s finale all the dancers, including those cut, are decked out in glistening gold costumes blending as a singular mass, wonderfully perform the reprise of “One.”  And despite having to endure publically telling their own diverse stories, are symbolically stripped of individual identity.

Olney’s production of A Chorus Line features a very attractive and talented bunch of dancers and actors under the expert direction of Stephen Nachamie.  They powerfully and gracefully glide and swerve in precise movements and none deserve to be cut.  But in the end, somebody has to go.

Through this show, which was inspired by a number of gypsies’ actual stories, we’re taken back a few decades, but truth be told, aside from the costumes and hairstyles, it is all so contemporary.

Running Time: Two hours and 20 minutes with no intermission.

Advisory: Some profanity and not recommended for children.