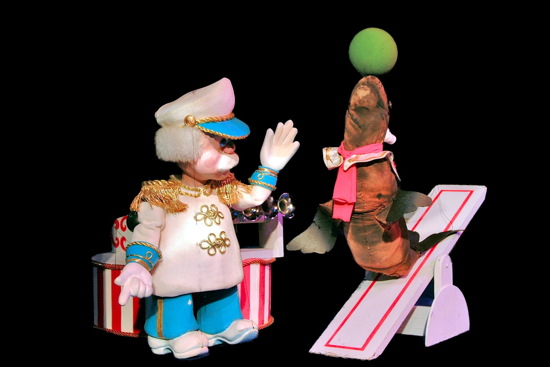 The stage is set as a one-ring circus, complete with red-striped curtains and platforms, and with props that change with each puppet character.

If you want all the thrills and chills of a traditional circus and a heaping helping of puppet magic, then don’t miss ‘Circus!’ at The Puppet Co.

Up first are two marionette puppets.  One is a clown, and the other is a seal that can balance a ball on his nose and play a row of horns by “blowing” into each one.  Next up is a marionette bear with a baton-type stick that he can throw above his head, catch and then balance straight up on his nose!

One standout act arises when Christopher Piper has a puppet lowered from the ceiling on a trapeze.  The puppet is ever so slight and beautiful, and Piper swings her back and forth gracefully as she hangs upside-down and flips around from front to back on her trapeze. 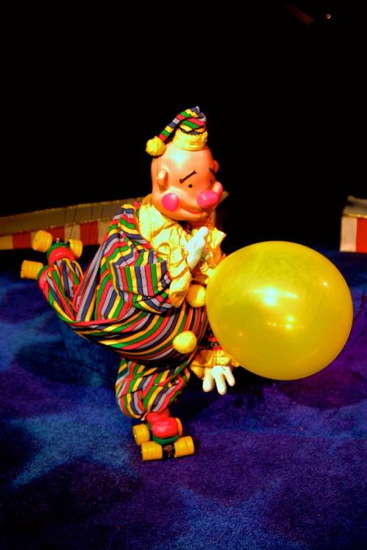 A roller skating clown in the center ring.
Photo provided by The Puppet Co.

Other fun puppet performers are two Bunraku puppets — Japanese’s style puppets that are operated not by strings but by puppeteers covered in black and moving the puppet’s arms and legs with their hands.  Circus! features a large lion and lion tamer Bunraku puppet, brought to life by Piper and Suyat.

As the puppets go through their performances, the different personalities and performance styles are in the forefront. The strings seem to slip away into the background.  Children and adults alike clapped and cheered for all the puppets, and some “ooohs” and “ahhhs” were heard for a bright red light that is a clown’s nose and for bubbles that float down both from the ceiling and from a puppet’s bubble-wand.

If you want all the thrills and chills of a traditional circus and a heaping helping of puppet magic, then don’t miss Circus! at The Puppet Co.

Running Time:  35 minutes with no intermission.