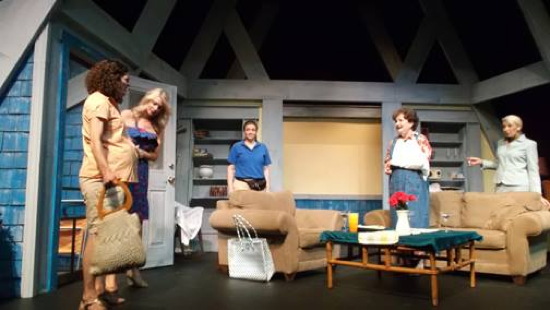 What happens when college best friends grow up? We get a show spanning over 30 years of joy, heartbreak, and martinis at their beloved beach cottage. Audiences are sure to laugh and cry as the girls in Dixie Swim Club cope with marriage, children, love, sex, disease and death in this part Steel Magnolias, part Golden Girls utterly delightful play.

Set over the same weekend in August, repeated over 30 years, a college girls’ swim team meets at their special ocean-side cottage to escape from the world and rekindle their friendship. Over drinks, discussions, and occasionally catty arguments, the girls enjoy life’s simpler times. Directed and designed by Gary Goodson, Dixie, at The Cumberland Theatre, opened on Friday to a robust audience who seemed to enjoy every minute.

…it delights with its quick, witty dialogue, good running jokes, and self-deprecating humor.

Sheree (Angela Merrithew) manages the group with ultra-organized schedules, disgustingly healthy snacks, and an always perky attitude. Dinah (Kim Rowley) is the no-nonsense, career girl lawyer, who is never far from her cocktail shaker. Rowley, in one of her best roles to date, gave a fierce, yet emotional performance. Lexie (Kedra Gowans) has a long history of failed marriages and fascinates the girls with her plastic surgery procedures. Jeri Neal (Marta Fiscus) is the lapsed nun turned wife and mother. Vernadette (Joan Crooks) is probably the least successful of the group, with a rocky marriage, incarcerated children, and poverty always one step away. Crooks impressed with her superb comedic timing, lending a healthy dose of humor to otherwise grim situations.

Despite the danger of falling into stereotypes, the cast rises to the challenge and maintains characters full of honest and gentle sincerity. Dixie examines enduring friendships and womanhood in all its stages. Much more than a simple chick flick, it delights with its quick, witty dialogue, good running jokes, and self-deprecating humor.  The one thing we learn, in over three decades, is that nothing really changes between girlfriends – they’re still college best friends skinny-dipping at the beach.

Especially notable was the careful costuming. Designed by Wendy Walker, the changes made to reflect the aging of the characters was subtle, but extremely effective.

Dixie is recommended to all, but it would be best to leave younger children at home.

Advisory:  For mature audiences due to adult themes and language.