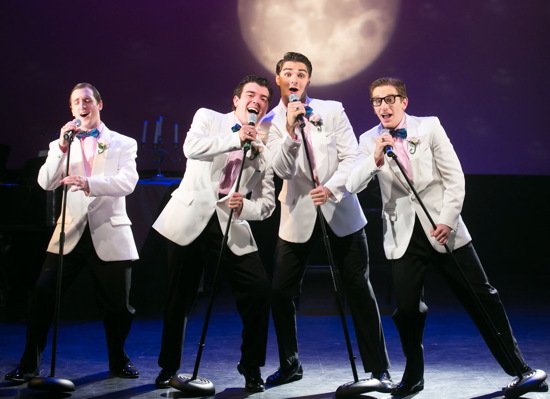 The Plaids: Chris Rudy as Jinx, David Landstrom as Sparky,
Austin Colby as Frankie, and Brandon Duncan as Smudge.
Photo by Heather Latiri.

Fame is fleeting. Achieving even a modicum of success is a rarity for most singers and entertainers. Even rarer are second chances at stardom. But in Olney Theatre’s revival of the sentimental musical, Forever Plaid, a 1950’s quartet gets an unusual and otherworldly opportunity to relive their dreams and perform the music of their generation. In this airy narrative written by playwright, Stuart Ross, four young singers return from the afterlife after an untimely accident cuts short their budding careers. With a pianist, bassist and four microphones in tow, the teenagers reclaim the spotlight in one last nostalgic hurrah.

Assuming you were alive during the era of doo-wop music, Forever Plaid is a wistful and lively trip down memory lane. The set list is your standard jukebox fare, but runs the gamut from upbeat and cheerful to pining and forlorn. Strewn scarcely between musical numbers are the personal stories of each member of the quartet. The dialogue is rife with tons of apropos references to Ed Sullivan, Perry Como and the pursuit of the good ole American Dream. What an amorous and romantic portrait of a bygone era!

[Forever Plaid] … is a fun show that baby boomers and families alike can enjoy.

Tirelessly belting out crisp, classic melodies, the men of Forever Plaid are an engaging, energetic and a charismatic foursome. As “Frankie,” the unofficial front man of the quartet, Austin Colby is tall, handsome, poised and a believable leader. Colby’s natural charm stands out especially during his pensive rendition of, “Three Coins in the Fountain,” but also during his many magnetic interactions with the audience. David Landstrom as “Sparky” lives up fantastically to his character’s name. Exuding tons of verve and comedic timing, Landstrom’s antics during the prop heavy, circus-esque “Lady of Spain,” are particularly unforgettable. Overall, Both Colby’s and Landstrom’s voices seem to perfect the balance of the group’s harmonies in all eighteen songs.

As “Smudge,” the group’s resident nerd who loves 45s and vinyl, Brandon Duncan is endearing and committed to his clumsy and uncoordinated role. Donning thick eyeglasses and two left feet, Duncan’s appearance belies a surprisingly strong and commanding voice. His deep, bass laden vocals especially shine during “Perfidia,” “Chain Gang,” and the campy, “Crazy ‘Bout Ya Baby” in which the quartet refurbishes toilet plungers into microphones. However, most surprising is Chris Rudy as “Jinx,” Forever Plaid’s softy who is prone to nosebleeds. His falsetto voice is unexpectedly arresting, sensual and mood-evoking. Rudy’s rendition of the forlorn ballad “Cry” completely steals the show.

Thanks to Costume Coordinator, Jeanne Bland, the men of Forever Plaid are as visually sharp as they sound. Donning crisp off-white suits and plaid cummerbunds for most of the play, the men certainly look the part, rivaling even the smoothness of The Drifters, The Flamingoes and The Coasters combined. Likewise Lighting Designer, Gary Slootskiy carefully ensures that the hues and shades of the lighting always compliment the mood of each up-tempo tune or ballad. 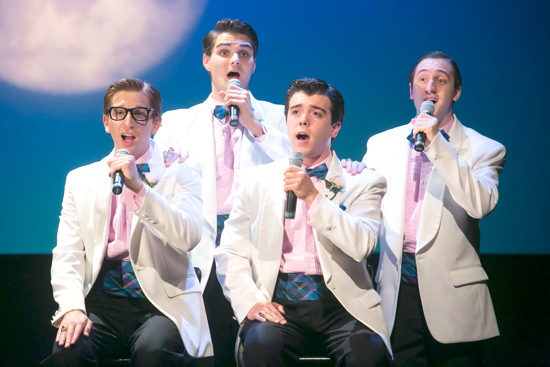 The Plaids: Brandon Duncan as Smudge, Austin Colby as Frankie, David Landstrom as Sparky and Chris Rudy as Jinx.
Photo by Heather Latiri.

Together Music Director Joel DeCandio (who also plays piano in the show) and Sound Designer Max Krembs give the cast vocals as well as the instrumentation of DeCandio and bassist, Chris Chlumsky their due. DeCandio and Krembs exhibit obvious technical prowess. No microphone feedback. No drowned out vocals. Pure perfection.

While Bobby Smith opts to recreate the original staging and design by Hannah J. Crowell and Stuart Ross, the world of Forever Plaid is no less vibrant, bright and effective. A simple projection of a moonlit sky is perched upstage. Other projections transition onto the screen to navigate the musical’s ever-changing moods. The choreography, while clearly reminiscent of the performers of the ‘50s and ‘60s, is infused with its own campy, rough-around-the-edges brand of humor. The end result is a fun show that baby boomers and families alike can enjoy.