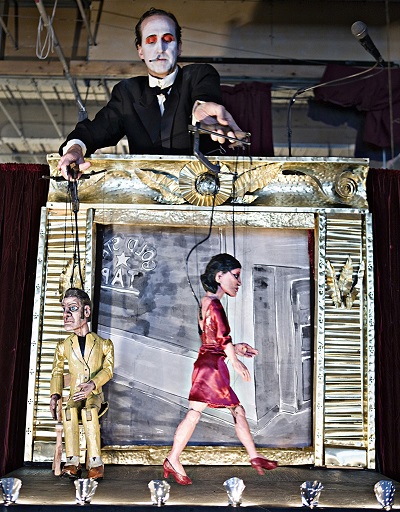 In the hands—and imagination—of master puppeteer Blair Thomas puppetry becomes conceptual art of the highest order.  And storytelling becomes a visual and auditory feast that will surprise and delight even the most wizened of theatergoers.

The hour plus performance began with a one-man virtuoso performance of the Federico Garcia Lorca’s vintage tale, “The Puppet Show of Don Cristobal.”  Performed in the same bawdy, commedia dell’arte, vaudevillian style that characterizes the British Punch and Judy puppet shows, this fast-paced presentation featured Blair Thomas as all things to all puppets.

He began as a magically versatile Master/Mistress of Ceremonies who flips from character to character via a delightful twirling costume piece. He then became, literally, a one-man band, keeping the action booming along with a drum kit, horns, a ukulele, and tiny piano wedged beneath the puppet stage.  The story—a ribald and quirkily perverse tale of a randy old trickster doctor, Don Cristobal, wooing and wedding a lovely young lass whose raging hormones render her not particularly particular, until, that is, a handsome young puppet appears at her window on her honeymoon.

From this old fashioned tale of cuckolding Thomas moves on to his second puppet stage, and from it emerges an extraordinary retelling of the classic blues ballad of St. James Infirmary, famously recorded by such musical legends as Louis Armstrong, Cab Calloway, Janis Joplin, and recently, Hugh Laurie.   Master puppeteer Thomas has devised the most ingenious moving scroll on which his simple, yet haunting, drawings unfurl, and we watch the yellow-suited marionette man and his red-dressed marionette lover of this mournful tale live and die by turns.  Thomas not only orchestrates the marionettes’ seductions and dances, but belts out his own throaty rendition of this blues classic:

“I went down to St. James Infirmary,
Saw my baby there,
Stretched out on a long white table,
So cold, so sweet, so fair.
Let her go, let her go, God bless her,
Wherever she may be,
She can look this wide world over,
But she’ll never find a sweet man like me.”

The musicians—Chaerim Smith on violin, Chelsey Green on violin, Robin Massie-Pighee on viola, and Kenneth Law on cello—performed seamlessly, lifting the audience to serene.  On a series of backlit, rice-paper-like screens Thomas scrolled out contiguous storyboards on which the imagery and text of Wallace Stevens’ lyric poem, “13 Ways of Looking at a Blackbird” __- a Blackbird slowly appears and transforms with transcendent fluidity.  This is puppetry as certainly I had never seen before, and surrendering to the sheer beauty and eloquence of it was a joy.

The evocative music was composed by Strathmore Aritst in Residence alumna Chelsey Green and the Green Project. The Lorca text was translated by Catherine Brown.  The extraordinary sets, puppets and scrolls were created by Blair Thomas, with Jesse Mooney-Bullock creating the initricate St. James Infirmary puppets.  Imaginative and effective curtains and costumes were by Heidi Bakter and Sue Haas, and Tyler Culligan provided the seamless stage crew.

The sheer inventiveness, the sophistication of concept and execution, and the polish with which Blair Thomas & Company inhabited the worlds of these puppet plays demonstrated clearly why he is among the most respected and admired theatre artists in the country.  Do not miss the next opportunity to see Blair Thomas & Company in performance locally or in their home base of Chicago; it will be well worth every ethereal moment.

Hard Headed Heart has concluded its run.  For more information about events at Strathmore click here.