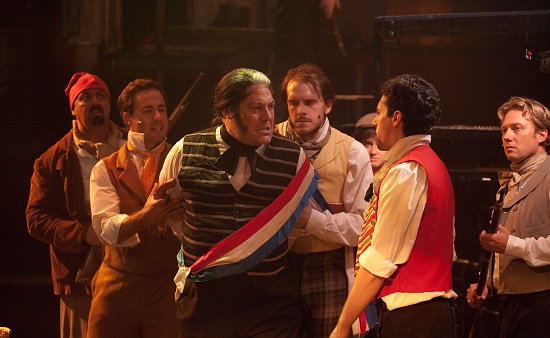 For over 30 years Toby’s Dinner Theatre of Columbia has been serving up a sumptuous buffet with professional shows performed ‘in-the-round.’ Now in production through November 10th, Toby’s much anticipated production of Les Misérables delivers the quality that one expects out of a theatre which has garnered over 57 Helen Hayes Award nominations.  Toby Orenstein keeps her accolades in perspective saying, “we are as a good as our last performance.”

Les Misérables, the gut-wrenching musical phenomenon by Boublil and Schönberg is now the world’s longest-running musical, seen by over 65 million people in 42 countries.  At Toby’s, you have the opportunity to see Les Misérables in a way that you have probably never seen it produced before — ‘in the round.’

Without a doubt, ‘Les Misérables’ is the most ambitious musical ever produced at Toby’s.

Set in early 19th century France, this musical adaptation of Victor Hugo’s novel proves that no good deed goes unpunished and that life can be absolutely miserable.  Case in point is our hero of the story, Jean Valjean (Daniel Felton), who served a jail sentence for having stolen a loaf of bread to feed his starving sister’s child.  Life isn’t all without hope and through the mercy of The Bishop of Digne (Andrew Horn), Jean Valjean is told  that he must use his gift of silver “to become an honest man.”  Having broken his parole, eight years later Valjean has assumed a new identity as Monsieur Madeleine, a wealthy factory owner and mayor of Montreuil-sur-Mer. Jean Valjean’s nemesis, Javert (Lawrence B. Munsey), a police inspector, relentlessly tracks him down, not willing to let go of Valjean’s “criminal” past. 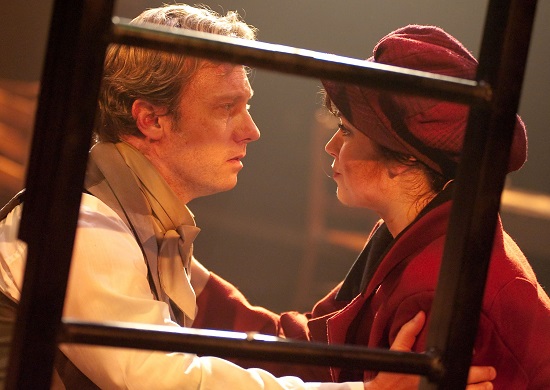 Marius (played by Jeffrey S. Shankle) pleads with Eponine (played by MaryKate Brouillet) to leave the barricade for safety and deliver a letter to Cosette. Photo by Kirstine Christainsen.

David A. Hopkins has designed the largest sets ever assembled for the Toby’s stage.  The barricade itself is a monster set-piece, constructed of metal platforms with wheels for easy assembly.  Being in-the-round provides many challenges, not the least of which is to have a barricade large enough to look fierce, yet practical enough to assemble quickly, safely, and for audiences to be able to see the action from all sides.  The bridge is also a success using the same metal platform concept.

Equally as challenging is the musical score.  Musical Director Christopher Youstra leads the live orchestra which includes keyboards, violin, trumpet, reeds, and trombone.  With small space and budget in mind, Mr. Youstra also created orchestrations which, for the most part, are faithful to the original score.  One aspect, however which would have given more punch to the orchestra would have been to have a percussion section.  With the exception of a few measures of a computerized drum snare and other bits here and there, the strength that percussion can add was missing from the arrangements.  Still, keeping in mind all of the limitations, the orchestra sounded very nice.  In particular, it was a pleasure to hear a live violin which is too often replaced with a synthesizer.  The fantastic trombone playing was also great fun, especially during “Master of the House” where it really brought the song to life.  Credit must also go to sound designer Drew Dedrick who provided a good balance between the orchestra and the singers.  Without a good sound design, this all-singing musical would have failed miserably.

Thanks to the directors Toby Orenstein and Steven Fleming, the show never feels long or tired, keeping the pacing of the show as brisk as possible, considering the show is three hours with intermission. The directors made many good choices, not the least of which is the casting of Daniel Felton as Jean Valjean.  Mr. Felton delivers a Jean Valjean in which the audience cheers and roots for!  His vocal chops are quite extraordinary.  In his rendition of “Who Am I?,” Felton is able to accent all the right lyrics and deliver with passion his plight.  “Bring Him Home” is also successful, delivering subtle inflections in his voice which helped to make his performance an unqualified success! 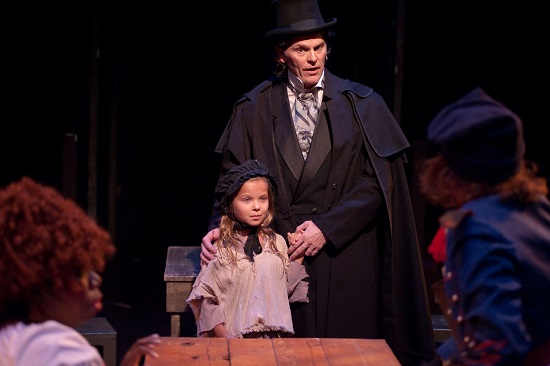 Jean Valjean (played by Daniel Felton) pays the Thenardiers to take young Cosette (played by Ella Boodin) to raise her in a warm and loving home. Photo by Kirstine Christainsen.

Lawrence B. Munsey as Javert gives one of the best performances in the show.  Munsey takes command of his role as Javert, lock, stock, and barrel.  His solo “Stars” was strong, yet sensitive, and was certainly one of the more memorable moments.   Munsey’s larger stature against the smaller Felton made his struggle all the more courageous.  When on stage together you could sense the history between these two characters from two different backgrounds as they each fight their own battles.

Speaking of battles, early 19th century France is not a happy place. Obviously there is some physical fighting in this play. Unfortunately, the execution of all the slaps, punches, and pushes were, at best, tentative.  I am sure with more performances that the actors will become more confident and that the stage fights will become more realistic.

From the moment Theresa Cunningham entered the stage as Madame Thenardier, the unscrupulous wife of Thenardier (David James), a thief and owner of a small inn, she had the audience in the palm of her hands with her deliciously devilish dark-side.  With all the fun the Thenardier’s bring however, I would have liked to have seen more comedic interaction and chemistry between the two.  In addition, more antics with the customers during the song “Master of the House” would have made the number even more lively and boisterous.

Other memorable moments include Janine Sunday (Fantine) singing the classic song “I Dreamed a Dream,” MaryKate Brouillet (Eponine) performing a moving “On My Own,” and Jeffrey S. Shankle (Marius) with Brouileet singing the tearful “A Little Fall of Rain.”  I also won’t soon forget the ensemble performing “At the End of the Day” which was so chilling, I could literally feel the coldness that they were feeling.

At the end of the day, the show received a well-deserved standing-ovation.  Without a doubt, Les Misérables is the most ambitious musical ever produced at Toby’s.  For me, I look forward to going back to Toby’s to enjoy watching Les Misérables for a second time!