Theatre Review: ‘Much Ado About Nothing’ at Annapolis Shakespeare Company 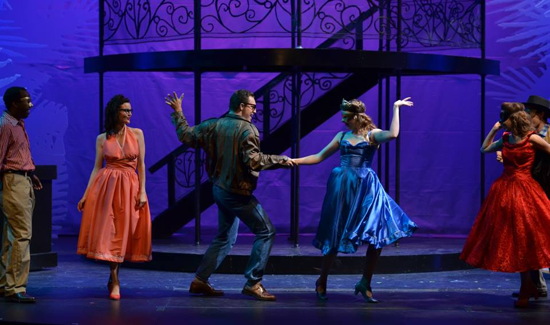 Annapolis Shakespeare Company’s production of Much Ado About Nothing is a bright, cheeky spin on a classical comedy. Set in the 1950s, the atmosphere feels more suited to Noel Coward than William Shakespeare. Well-dressed sailors chain-smoke and swill martinis while a swarm of young, eligible women lounge by the pool discussing romantic pursuits. For all its retrofitting, the concept does not detract from Shakespeare’s trademark wit, and the evening is full of as much lighthearted charm as acerbic repartee.

Much Ado About Nothing concerns the love lives of two pairs— Claudio and Hero, who love in earnest, and Benedick and Beatrice, who are more interested in sending cutting insults than love notes to one another. The machinations of the bitter Don John, illegitimate brother of the prince Don Pedro, derail Claudio and Hero’s love story. Meanwhile, good-natured scheming spoils Benedick and Beatrice’s hatred, and tricks them into falling in love. All games of love and war are settled in the end, with two weddings and a body count of zero. Happily ever after, indeed.

Annapolis Shakespeare Company creates an atmosphere in ‘Much Ado’ that makes five acts of Elizabethan prose feel like a brisk two hours of nostalgic American comedy.

The scenic design by Steven Royal creates a wonderful sense of place, transporting the story from the Italian port of Messina to the Messina Motel, the sort of place you would expect to find a swim-up bar and a jukebox blaring oldies music. The design is simple, consisting of a wrought iron balcony that spins on its axis to indicate scene changes. Palm trees in white silhouette frame the stage, capturing the play’s shifting moods by reflecting different colors of light. The costume design by Maggie Cason is true to the 1950s, but takes a whimsical nautical bent (this is the Annapolis Shakespeare Company, after all).

Strong performances root the sweetness and style in reality. Rob McQuay is strong as Leonato, playing the patriarch with a mix of fatherly wisdom and good-natured mischief. Michael Ryan Neely as Claudio is at his best when the character is brooding, although he plays the wistful romantic with equal zest. Notable performances also include Stephen Horst as the suave, masculine Borachio, and 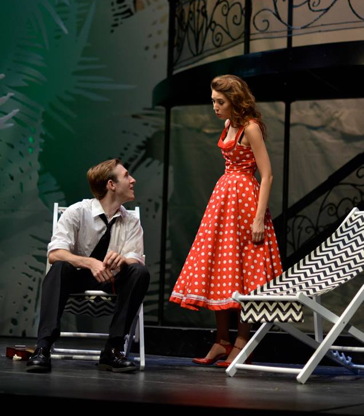 Alyssa Bouma, who plays the falsely accused Hero with unapologetic naiveté. Alex Foley is hilarious as the constable Dogberry (a Boy Scout leader, in this version). The Prince’s Watch/Boy Scout scenes make the most of their comedic potential, but at times, the slapstick humor turns stale with repetition. The actors tend to gesticulate and play up the innuendos and double-entendres, but these moments garner a few laughs, even if there’s a chorus of sighs implying “ugh, they went there” from the audience.

As the quarrelsome lovers Benedick and Beatrice, Grayson Owen and Chandish Nester have excellent comedic timing and flirtatious energy. As Benedick, Owen is clear in purpose and intention, and brings an abundance of physical humor to the role. Nester’s Beatrice comes out of the gate so flamboyant that she threatens to upstage the ensemble, but as the play goes on, she tones down the melodrama and becomes more scrappy and likable.

One of the strongest aspects of the production is the staging and direction by Sally Boyett-D’Angelo. The action moves at a vigorous pace, more like one continuous dance number in a musical than a slew of individual scenes. While the style is deliberately showy and presentational, it is also very efficient, and the large ensemble never looks overcrowded. Rarely, if ever, do you get the sense that Boyett-D’Angelo made directorial decisions without finding proper justification in the text.

Annapolis Shakespeare Company creates an atmosphere in Much Ado that makes five acts of Elizabethan prose feel like a brisk two hours of nostalgic American comedy. The candy coating may be a bit thick in places, but the overall concept is clever and entertaining.

Running time: Approximately 2 and a half hours with a 15-minute intermission.