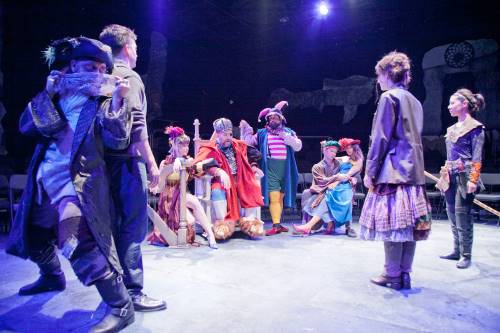 The cast at Earl’s Court. Photo by C Stanley Photography.

Attempting a stage edition of Neil Gaiman’s Neverwhere (in its theatrical adaptation by Robert Kauzlaric) is, at the very least, ambitious. A cynic might call it borderline impossible–after all, Neverwhere is the story of a man landed in the strange and fantastical darkness of London Below, where bizarre and frightening creatures emerge from the gap between the Tube train and platform.  A giant pig haunts the sewers, and Knightsbridge is a bridge made of actual night. However, Rorschach Theatre has managed to capture every drop of weirdness, humor, and fascination that the original novel and miniseries had in spades.

Richard Mayhew (Daniel Corey) is just an ordinary Scotsman working in a white-collar job in London at a desk covered in troll dolls when, on the way to a dinner with his fiancee Jessica (Liz Osborn), he comes across a poor and desperate girl named Door (Sarah Taurchini) bleeding on the pavement. His Good Samaritan instincts lead him to take her back to his home, fix her up, and get her help, from the enigmatic and slightly camp Marquis de Carabas (Grady Weatherford). Readers familiar with fairy tales may recognize the name from the story of “Puss in Boots.” Viewers familiar with London may recognize a number of other things–a character named Hammersmith (Lee Liebeskind) after the district and Tube station, another named Old Bailey (Scott McCormick), after a large and iconic London building, and the Angel Islington (Cam Magee), after an area in London’s affluent Islington neighborhood.

…a must-see for Neil Gaiman fans

Richard enters a strange world where city landmarks and Tube station names take on a peculiar literalness, where people speak to rats, black friars in “Blackfriars” guard the key to reality, and the horrifically evil Croup (Colin Smith) and Vandemar (Ryan Tumulty) stalk the streets in search of a girl who can open doors out of nowhere. 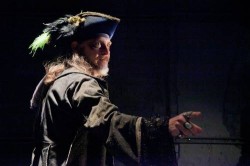 To enter the theatre, an audience member walks past signs of closed Tube stations and down a dimly lit alley to a massive theatre in the round, where street signs and corrugated iron dominate the walls. The action (of which there is quite a bit) occurs all over the space, running back and forth, above and behind. Puppet rats led by Liebeskind scurry across the stage or cower behind a seat. Lighting designer Cory Ryan Frank has done a great job of differentiating between Richard’s fluorescent office and Door’s dark world, while the theatre design makes for some interesting moments. At one point, the stage becomes a true arena, for bodyguard auditions–the audience suddenly become spectators to the fight between Hunter (Jennifer Knight) and the hapless Varney (Liebeskind). Later, it becomes the arena for a different kind of fight, between a primeval beast of legend and Richard, our hapless hero. 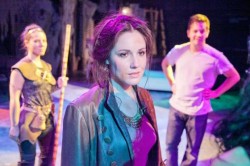 Director Jenny McConnell Frederick has excellently managed a large ensemble, each playing a variety of roles. Tumulty’s turn as Vandemar is particularly disturbing–there is a nauseating and scary moment when he bites into a rat with glee, another when he staples a man in place by strips of his own body. Weatherford’s turn as Carabas is suitably deadpan and filled with both practicality and excellent comedic timing, while Corey as Richard truly carries the heart of the show. He admirably demonstrates what dramaturg Megan Reichelt identifies as the “central truth” of the story: “that one ordinary person can rise above what the world expects of him and what he expects of himself.”

The one criticism I can mention for this show is that a number of the accents were far from convincing. Many British-oriented pieces adapted for the American stage choose to make them more local (The Full Monty, for instance, moving from Sheffeild to Buffalo, NY, or American-accented Shakespeare productions). Obviously, in a show where London is as much a character as anyone else, switching it to a story about the DC Metro is virtually impossible. But there were moments when I privately wondered if London Below was actually in America.

Despite this, however, Rorschach’s Neverwhere is a clever, engaging adventure in a wonderfully realized world, and a must-see for Neil Gaiman fans, theatre fans, and anyone who likes a good story.