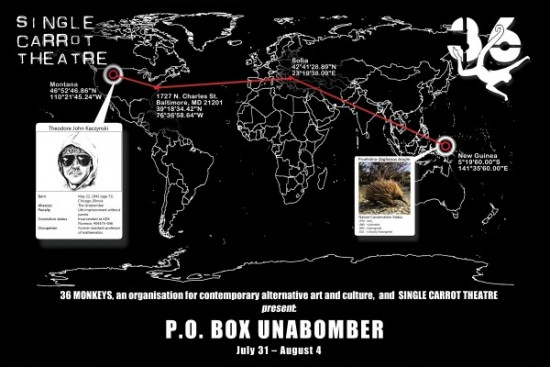 Make no mistake about it, Baltimore’s Single Carrot Theatre has the edge.  If you are looking for an intellectually challenging, experimental theatrical production, then P.O Box Unabomber, the theatre’s current collaboration with the theatre company 36 Monkeys in Sophia, Bulgaria is your destination.  Its in-your-face, presentational exposé on the intersection between technology and terrorism will leave you dazzled and weary about the future—guaranteed!

Using sections of “Unabomber” Ted Kaczynski’s published manifesto as its starting point, the script by Bulgaria’s Zdrava Ramenova and Gergana Dimitrova (translated by Atanas Igov) offers audiences an intellectual journey, not into the dark heart of a terrorist mastermind, but into the all-too-prescient conclusions that mind set forth 20 some years ago about technology’s global, totalitarian reach.

The story of Unabomber is not, however, Kaczynski’s, except in theory.  Rather, the script gives us two stories: one the fictional tale of a family; the other the symbolic fable of an echidna, an egg-laying mammal on the endangered species list.

The primary story involves the spawn of the original Unabomber, a young man with a vivid imagination, a wife, and a young son.  One day, circa 2010, he disappears, retreating into the wild much like his theoretical father did.  His wife misses him; his son worships him, while he builds a cardboard bomb.

The echidna’s symbolic story focuses on the anteater’s search for a mate in a world growing desperately short of echidnas, male or female.  Not as sharply drawn as the primary story, the echidna wanders the earth looking for its future, even going into the lobby (or maybe the street) on one occasion to accost passersby.

Director Gergana Dimitrova directs her four-person ensemble in a sort of reader’s theatre with guts.  She projects the text of the script onto a large screen, positioned so that the actors (not the audience) can see it.  It acts as a teleprompter, allowing the actors to read the text, which they do unabashedly.  In fact, the act of reading, whether into microphones or a bullhorn or without device heightens the presentational style of the performance.  As a result, absent the empathy representational theatre provokes, the audience’s attention remains focused solely on the ideas of the script.

…will leave you dazzled and weary about the future—guaranteed!

The four-actor ensemble consists of Katelin McMullin, Paul Diem, Nathan A. Cooper, and Jessica Garrett.  McMullin, Diem, and Cooper team up to present a host of personas from the bomber’s loving wife, to his cute son, to a group of Montanans eyeing suspiciously that newcomer in the woods.  Each different persona is presented sharply yet simply with the turn of a hat or the lifting of an eyebrow.

Garrett, on the other hand, offers us the echidna, a portrayal that is, in comparison to the others, all warm and fussy, which most definitely defines the echidna’s inner soul not its prickly exterior.  News of her ghastly extinction struck the evening’s sole note of heartfelt sadness.

Music and projections most definitely add to the performance’s effect, as well as helped the audience differentiate between the various plotlines.  The music, performed by Jeremy Durkin, underscored the tonal changes in the pieces as did the video projection, designed by Riki Kim.

To be sure, P.O. Box Unabomber, both as script and as production, is rough around the edges, one could argue purposely so.  Theatrical spectacle, like the spectacle of viral videos and Hollywood graphics, is meant to deceive or distract the viewer not enlighten or provoke thought.

Given the gloomy prospects of Unabomber’s subject, however, and considering recent advances in drone assassinations, NSA mass sweeps of personal data, daily high tech money manipulations by major financial institutions as well as nightly subversions of even our dreams of a better world, might not a little spectacle serve the audience well lest one of its members join the ranks of the bomb-makers?  Don’t worry.  There’s nothing like a little song and dance to lighten the mood, but I’m not telling.