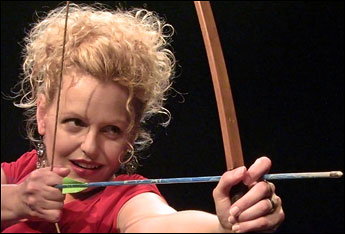 Tonya Beckman as the Princess of France. Photo by Marcus Kyd.

For most theater troupes, it takes months of planning, preparation, and rehearsal to put together a successful Shakespearean production.  For Taffety Punk’s Bootleg Shakespeare production of Love’s Labours Lost, it took one day.

An annual event put on by the troupe, the idea of a Bootleg production is to take a group of actors, cast them, give them some time to learn their lines and then gather them on the day of the show for one single day of rehearsal. No expansive set, no spectacular lighting, no finely choreographed fights, just the actors, costumes, and props they bring themselves whatever blocking they can throw together after a single day of rehearsal. The result is a uniquely manic production hilarious in both text and execution that in true Taffety Punk style brings something new and refreshing to a city at times overwhelmed by Shakespeare.

…one of the most impressive feats of Shakespearean mastery I have ever seen.

To start with, a production like this would not be remotely possible without a supremely talented cadre of actors, each with a deft mastery of the language; and the actors on display this year delivered on this point squarely. The words flow from their mouth with effortless fluidity, and they know every last obscure joke as if they told it themselves. A lesser troupe would need days, maybe weeks, of rehearsal to get a solid hold on the language of any given show, but Taffety’s actors demonstrate the mastery of that rehearsal time just after memorizing the words themselves. Aside from that, they were talented enough to let the actions they take play off of each other one after another to fill in the gaps left by the lack of rehearsal, almost as if they were improvising every choice and movement. They likely were to a degree, but it rarely came across that way. To be able to present a full production in the Bootleg context is one of the most impressive feats of Shakespearean mastery I have ever seen.

This is not to say, however, that you never noticed the lack of rehearsal time. On the contrary, cues were missed frequently, line was called more frequently and blocking was haphazard at best. Like an endearing B-movie, however, this slapdash aesthetic is part of the charm, the whole reason the show has so much appeal in the first place. Not only did it provide its own moments of hilarity outside of the text, but it allowed the company members to take silly risks they would not otherwise have taken. The plot for example calls for the four male protagonists to disguise themselves as “Muscovites” at some point. Rather than deck themselves out in the thick beards and ushankas that most productions would gravitate towards, the four “disguised” themselves with a leather jacket and mullet wig, a paper cutout of Vladimir Putin’s face, a cut in half silver kickball and tinfoil sticks to represent Sputnik, and a full body bear costume. Unwilling to let the costumes go to waste, they enter in a semi-choreographed dance number set to Russian folk music. I do not believe I have ever seen actors have more fun onstage, and as an audience member, you could not help but share in this infectiously fun spirit.

Of course, choices like these would likely never hold up in a “professional” production, but that is exactly why they make the Bootleg such a unique and popular event each year. It is miles away from a professional production, and that is exactly the point. Ironically enough, it plays to the Shakespeare purists, the ones who know that Shakespeare doesn’t need to be grand in scale or painstakingly produced to be successful; rather, all it needs is a troupe of dedicated actors with a sharp ear for the language and willingness to take big risks.

Taffety Punk’s Bootleg Production happens only once a year, and for a single performance, so be sure to catch next year’s production.  This performance was held Monday, August 5 at the Folger Theatre, 201 East Capitol Street SE WDC 20003.