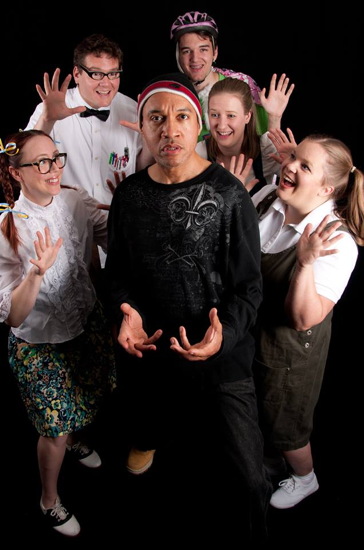 If you want to laugh for an hour and a half then The 25th Annual Putnam County Spelling Bee is the show to see. Nestled among a grotto of trees, Dignity Players/Theatre for Change is currently performing this production at the Unitarian Universalist Church of Annapolis.

Sheri Kuznicki-Owen opens the show as Rona Lisa Peretti, the host of the Bee. Perky and vivacious, she greets the audience with exuberance, tells of her win at the 3rd annual Bee, and then explains the rules of the contest. Kuznicki-Owen plays this character like a beauty pageant contestant. No doubt her talent is her voice especially in “The I Love You Song,” with characters Olive and Mitch.

Kevin Wallace is Douglas Panch, the Vice Principal that has been away from the Bee for five years. He is apologetic of the past incident but this character is clearly on edge as he delves out each word to the contestants. From the beginning, it is apparent he has a crush on Rona as he sings “The Rules” with her and the ensemble cast.

The cast’s high energy, the headline news jokes, and audience participation has one believing they are actually at ‘The 25th Annual Putnam County Spelling Bee.’

Chris Haley portrays Mitch Mahoney as a tough ex-convict who is doing community service hours for the Bee. Haley is a powerhouse vocalist that is equal to the Broadway sound. As the show progresses, Mitch Mahoney wants to knock some sense into these overachievers. However, in “Prayer of the Comfort Counselor” he realizes it’s best to hand out the juice boxes with the elimination of each contestant.

Ali Vellon is the epitome of female geekdom as Logainne SchwartzandGrubenniere. She carries a pillow pet across her stomach because she was punched, has a heavy lisp, and her glasses are way too big for her beautiful face. Vellon’s character is humble and somewhat shy but certainly delivers in “Woe is me.” 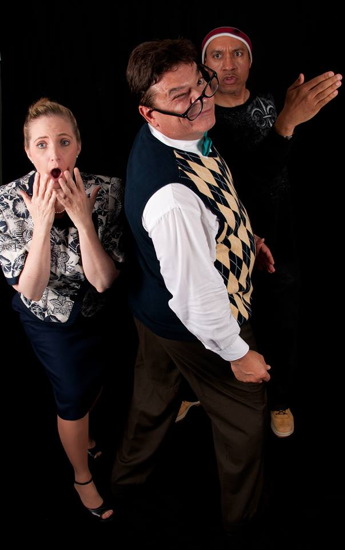 Jason Vellon plays flirty Chip Tolentino with great confidence. This character, who dresses like a boy scout, is one randy kid. An entire song is dedicated to him discovering the manliness of his manhood. Vellon is both fun and funny especially when it is his turn to leave the Bee. His scene with Haley is absolutely hilarious along with his solo of “Chip’s Lament.”

Mickey Ruttum is an absolute goof as Leaf Coneybear and what is great about this character is that he likes being goofy. Full of rambunctious energy, Ruttum is adorable. If the audience is not laughing with this character, then his lime green t-shirt, his pink plaid pajama bottoms and pink clogs along with his handmade cape, will leave you rolling on the floor. He is quite expressive in “I’m not that smart.”

Shannon Benil is remarkably crabby as Marcy Park. She takes the seriousness of the Bee to a whole new level with her very terse body language and stern expressions. She doesn’t crack a smile until her epiphany in “I Speak Six Languages” that includes precisioned baton twirling.

Laura Kavinsky as Olive Ostrovsky is scared of her own shadow. Her insecurities stem from her mother’s decision to go to India and not the Bee. This painfully shows in “The I Love You Song” with characters Rona and Mitch.

Dean Davis is the nerdiest of the nerdy spellers as William Barfee. His character is only able to spell with the use of his “Magic Foot” as demonstrated in the musical number of the same name. This character is so weird that seems mean to laugh at him but Davis spot-on with this character.

The cast’s high energy, the headline news jokes, and audience participation has one believing they are actually at The 25th Annual Putnam County Spelling Bee. This show is a bundle of laughs and at times endearing.

Running Time: 1-1/2 hours with no intermission.