Theatre Review: ‘The Lady in the Van’ by Unexpected Stage Company at the Randolph Road Theatre 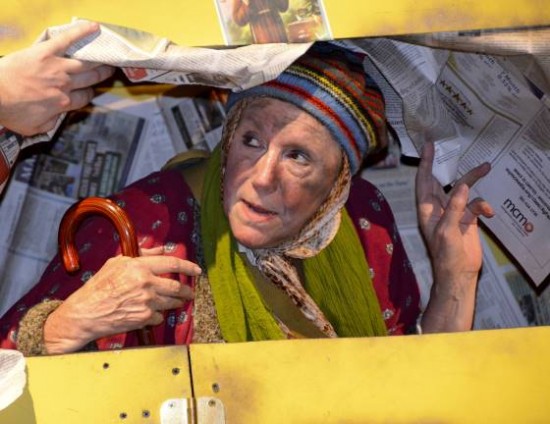 Alan Bennett’s 1999 comedy The Lady in the Van, now playing at the Randolph Road Theatre (produced by the Unexpected Stage Company), has a lot going for it.  Bennett’s writing is lively and witty; the acting ensemble is solid, sparkling with enthusiasm; the characters are entertaining and the theatre, inventive.  So chances are you will enjoy this show, about 2 hours and 10 minutes of it that is.  Unfortunately, the show is 2 ½ hours long. During those extra 20 minutes, if you are like me, you’ll be wishing that someone could get Alan Bennett to shut up.

The premise of The Lady in the Van is marvelous, however.  The playwright Alan Bennett moves into a new home in London’s Camden Town—yes, the play is an example of theatrically creative autobiography, and Alan Bennett is actually a character in the play.  Actually, he is two characters: on the one hand, he is his fleshy exterior who frequently practices the British equivalent of politeness; on the other hand, he is the verbally gabby interior who turns every situation into a potential play. When, shortly after moving in, fleshy Bennett encounters the very real Miss Shepherd, a homeless, incontinent, older woman who lives in a broken down yellow van, the play begins, and the gabby Bennett is none too pleased. 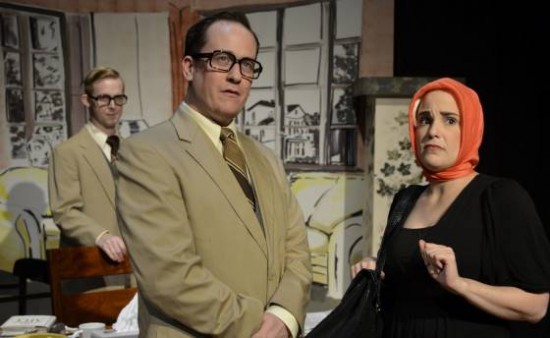 Exactly why Downs’ Bennett invites Miss Shepherd to move her van into his overgrown garden remains a mystery.  Perhaps, Bennett foresaw a new play being birthed out of the gesture; perhaps, he was tired of being criticized for not keeping the weeds out of his garden; perhaps, he even felt a moment of sympathy for the foul smelling Miss Shepherd.

In any event, Miss Shepherd, played with absolute relish by Sally Anderson, moves onto Bennett’s property where she lives for the next 15 years, or until her death.  Anderson successfully makes the psychologically wounded character not only interesting and sympathetic but comic as well, which is none too easy considering her crankiness.

Along the way, we meet an interesting array of characters, from Pauline (Dawn Thomas) and Rufus (Brandon Mitchell), the bourgeois “suburban” style neighbors who are quite put off by the presence of a homeless woman, to the strange and inexplicable Underwood, an investigator of sorts who couldn’t have been played more strangely and inexplicably by Mark McCarver.

By far the funniest turn of the evening was turned in by Tiffany Garfinkle as Miss Shepherd’s social worker.  Her scenes with Bennett as she tries to evaluate his behavior as “care giver” satirize the textbook trained social services employee to the letter.  In the end, however, she wins the day and casts a harsh light on Bennett when, despite her lack of real experience of Miss Shepherd, she knows the poor woman better than the uptight, standoffish playwright.

…you will enjoy this show

Rounding out this all round solid cast were Anthony Hacsi who played a host of characters from Shepherd’s brother to the doctor and Lois Sanders-DeVincent who played Bennett’s aging mother.

Director Christopher Goodrich handles the difficult staging well.  Working with set designer Steven Deluca they cleverly mix real set pieces with cardboard facsimiles.  When the cardboard van is wheeled on stage (or rather brought on stage using the Flintstone shuffle) it is delightfully apropos.   Lighting designer Peter Dowty and sound designer Elliot Lanes added just the right touches to the tone and comedy of the evening. 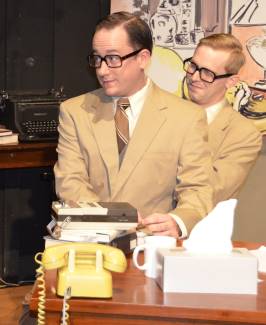 The relationship between the well-to-do and the lower classes continues to be a concern for playwright Alan Bennett.  His more recent play, The Habit of Art, which focused on W. H. Auden’s relationship with a rent boy, or boy prostitute, attempts to humanize those who are otherwise turned into objects of sex or art.  Ironically, The Lady in the Van successfully humanizes the homeless Miss Shepherd, who at one point had a quite vital and artistic life, even as it demonstrates Bennett’s own exploitation of her humanity by turning her life into an object of art. Thankfully, Bennett acknowledges this fact on more than one occasion, even as his playwrighter-self continues scripting.

As Bennett himself articulates in the play, the woman’s life is far more interesting than his own, tucked safe and secure inside his home nestled quaintly behind its ivy-covered walls.  It is her life and story that we engage in: we want to hear more of aspirations as an artist, we want to know more about her religiosity and spiritual upheaval, and we want to see more of her hopes and dreams as a human being and understand more of her tragic circumstances.  Unfortunately, even as she proudly proclaims that she has the last laugh, Mr. Bennett cannot resist the temptation to talk, and talk, and talk, as if it were he whom the play was really about.  As Churchill stated, however, “History is written by the victors.”  Or in this case the celebrity playwrights.

Running Time: 2 hours and 30 minutes with a 10 minute intermission.

The Lady in the Van plays at the Randolph Road Theatre, 4041 Randolph Road, Wheaton, through August 11.  For tickets click here.