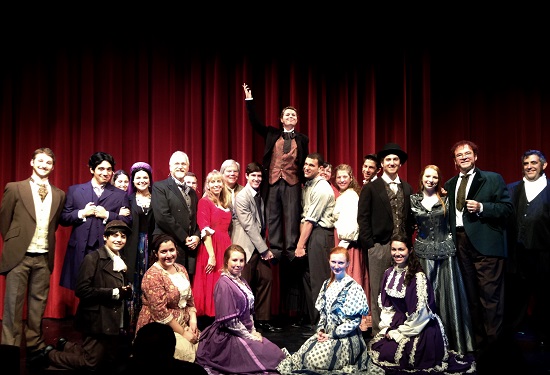 If you ever wanted to be part of solving a murder mystery then you will have that opportunity if you attend the Beth Tfiloh Community Theatre’s production of The Mystery of Edwin Drood.  The “solve-it-yourself musical comedy” skillfully directed by Diane M. Smith, is playing through August 25 at the Mintzes Theatre/Rosen Arts Center located at Beth Tfiloh Dahan Community School.  Given the short run and the high quality of the production, you would be wise to get your tickets fast.

This five-time 1986 Tony Award-winning farce (including Best Musical) is based on the novel, The Mystery of Edwin Drood by Charles Dickens.  The well-known English author died before he could complete this work, and a variety of writers and playwrights attempted to create their own endings to resolve the unfinished mystery.

Popular songwriter and artist Rupert Holmes put pen to paper to craft a musical comedy inspired by what Dickens already had written and Holmes’ own recollections of Victorian-style music halls.  In Drood, Holmes has the unique claim of being the sole writer of the book, music, lyrics and orchestrations.  The songs for the most part are solid with good melodies and clever lyrics.

There is no mystery that this is fun theatre.

He used most of Dickens’ characters and created his own framework by putting on a show within the show to add zany, campy comedy to Dickens’ work.  The extra dimension in Holmes’ product was to allow the audience to solve the mystery as to what may have happened to Edwin Drood rather than fashioning his own theory.

You may recall Rupert Holmes’ hit single, which he wrote and recorded “Escape (The Piña Colada Song).”  It has the catchy chorus: “If you like Piña Coladas, and getting caught in the rain…If you’re not into yoga, if you have half-a-brain.”  It turned out to be the last Number One pop song of the 1970’s, but I digress.

Oddball characters—residents of the English village Cloisterham—are introduced throughout the production by theatre veteran F. Scott Black who superbly plays the role of the Chairman or the emcee of London’s Music Hall Royale’s version of The Mystery of Edwin Drood.   Each character is played by another fictional character amplifying the show-within-the show concept.

Skillfully and sardonically and with a twinkle in his eye, Mr. Black, who founded Cockpit in Court Summer Theatre on the campus of CCBC-Essex and was its managing director for 27 years and ran his own dinner theatre in Towson, described the other characters.  He is the thread that binds the show’s plot and sets the mood.  Despite his 14-year hiatus from acting, Mr. Black seems as comfortable on a stage as Michael Phelps does in a pool.

After explaining the premise to the audience, Mr. Black as the Chairman introduces the characters with great vaudevillian-style flourish, one by one or in pairs, who are residents of this whacky village and have some direct or indirect connection with Drood.  Mischievously the Chairman offers possible clues relating to Drood’s baffling disappearance.  When the mayor was too drunk (as usual) to appear in the Music Hall’s production, the Chairman stepped into that role as well.

He is also in good voice as he sings with members of the ensemble in “There You Are,” “Both Sides of the Coin,” (an outstanding number that is supported by excellent choreography), and the first act’s finale in this production “Off to the Races.”  (Read Mark Beachy’s interview of F. Scott Black here.)

Kevin Ferentz turns in a fine performance as Drood’s split-personality uncle John Jasper and one of the principal suspects.  He is also in love with Rosa.

A true scene-stealer can be found in Liz Boyer Hunnicutt as Princess Puffer, a purveyor of opium as well as other vices.  Ms. Hunnicutt, the current Resident Director for the Children’s Playhouse of Maryland and a veteran of numerous acting performances in the Baltimore area, demonstrates her theatrical skill with spot-on delivery of lines supplemented by comical facial expressions and mannerisms.

She can also belt out a song or two with great vigor and tuneful precision.  Ms. Hunnicutt’s rendition of “The Wages of Sin” is superb as is her performance in “Don’t Quit While You’re Ahead” and “Puffer’s Revelation.”

Other standouts include Max Spitz as Neville Landless and Amanda Dickson as Helene Landless—a brother and sister duo from Ceylon.  Neville sees Edwin Drood as a rival as he also has his eye on Rosa.

Dave Spitz as Durdles, a constantly inebriated gravedigger, is hilarious and an audience favorite.   He, too, is considered a suspect but his motive is not as obvious as the others’.

All in all there are eight suspects with most of them having plausible motives to kill Drood, but before the audience is called on to select the actual murderer, other business must be taken care of.

First, there must be a determination as to whether or not Edwin Drood is in fact dead.  The cast gets to vote on this one and to no surprise, they conclude he is dead.

Then there is the matter of a mysterious figure named Dick Datchery.  He shows up obviously in disguise who is investigating Drood’s disappearance.  Because of a twist in the plot followed by a hilarious scene, I will not reveal what transpires.  But the audience is asked which one of the characters is really Datchery.

The hand vote as to who killed Drood will not be mentioned here, too, as it varies from audience to audience.  The cast is prepared to finish the show depending on the outcome of the vote—an especially distinctive device.

The final question to produce a “happy ending” involves who should go on to be the eventual lovers.  This performance’s vote surprised me and again, I will not disclose the result.

Amanda Dickson’s choreography is solid given the fairly large cast performing on a tight stage.

Evan Margolis, founder and artistic director for Beth Tfiloh Community Theatre, designed the set that included a beautifully hand-painted caricature of Charles Dickens and the show’s title.  Cut out from that backdrop is an opening where a wide array of props and furnishings are smoothly taken on and off the stage as the scenes change and serves as an entrance and exit for the performers.  Also on stage are two elevated platforms to denote the old-style theater boxes where a couple members of the ensemble sit in each during most scenes.

Ed Lake’s lighting design worked perfectly with the flow of the action.  And kudos goes to Tracy Bird for her flawless period costumes that take us back to 19th century England.

It’s unfortunate that this offering of The Mystery of Edwin Drood  has such a limited run.  With its good music and clever dialogue, it’s a pleasant experience that features a slew of odd characters played quite proficiently by an energetic talented cast and a stellar creative team.  Adding to the fun and uniqueness is the audience interaction and a hand it plays in the final outcome.

There is no mystery that this is fun theatre. I highly recommend this show, but you must act fast.

Running time: Two hours and 40 minutes with an intermission.

Advisory: The performance is appropriate for children ages 10 and up.

The Mystery of Edwin Drood plays August 20, 22 and 25 at the Mintzes Theatre/Rosen Arts Center located at Beth Tfiloh Dahan Community School, 3300 Old Court Rd., Pikeville, MD 21208. Tickets for all performances are $12 for general admission and $10 for students and senior citizens. Tickets can be reserved by calling the Beth Tfiloh Arts Department at 410- 413-2436, emailing BTCommunityTheatre@gmail.com, or by visiting online. Tickets will also be available at the door.