Theatre Review: ‘The Third Breast’ by Ambassador Theater at Flashpoint 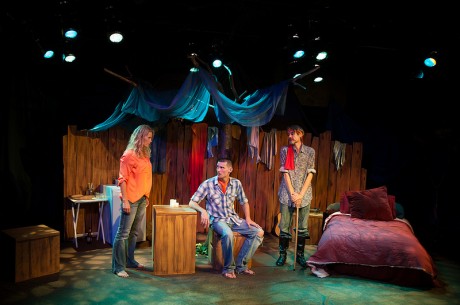 Past is prologue and the human heart cannot abide contradiction, certainly not the murderous Orwellian contradiction embedded in The Third Breast by Ireneusz Iredynski, translated by Sylvia Daneel, produced by Ambassador Theater, and presented at the Mead Theatre Lab at Flashpoint in downtown Washington, DC.

As a work of political analysis—intense allegorical introspection if you will—about the inevitabilities of power to consolidate itself, to protect itself at all costs, The Third Breast is an intricate example of Eastern Bloc rage against the machine–a 2 hour plus howl against the absurdities and cruelties and idiocies of eastern European communism’s long and bloody reign.  And, knowing what we in picosecond–memoried America now do about the now-fallen “Iron Curtain” (thanks to those dissident writers who gained the most prominence in the West-Vaclav Havel, Arthur Koestler, Slowmir Mrozak, Milan Kundera) those of us in the apathetic USA can perhaps begin to understand the guttural growl that is the subjugated mind’s dissent in its most fundamental form.

Dissent is not something the US takes to lightly on our soil.  It is contrary to our deepest notion of ourselves, and we tend to fall all over ourselves vouchsafing our supreme tolerance of dissent-aka, free speech—in our presumably advanced state of political evolution.

That the US or any other self-congratulating people are ridiculously self-deceived is one message The Third Breast drives home with a jack hammer.  Deep within any Utopian dream rest the snarling beast of domination and control, and a community–or a state or a people–ignores this monster at its peril.

Ambassador Theater’s production brings the work of Polish dissident playwright Ireneusz Iredynski to the DC stage, resurrecting for internationally less astute audience members the long dark chapters of Poland’s occupations-by czars and Nazis and communists.  The Poles must surely be among the planet’s most subordinated-if resistant and resilient-people.  And from this defiance comes The Third Breast, a long script with a short message.  It is not for the faint of heart or for those uninured to histories other than their own.  It is loud and strident and insistently direct.

The story, allegorical as it would appear, is this: Eva, the beautiful, free-spirited and seductive founder of a Utopian commune in a primordial valley somewhere, has grown an accursed anomaly.  What began as a small blemish has blossomed into a fully formed third breast, there on her slender body beneath her normal left breast.  A third breast bespeaks many things in many cultures, a quick Internet search reveals, the most common being one of witch-hood or demonic presence, and presumably these negative connotations inform Eva’s paranoia. The commune’s doctor–a fine physician but one with a shady past Eva tells us–has warned her that removing it will result in a presumably cancerous and fatal tumor.  Eva, distraught, has attempted suicide.  She survived but remains horrified that, should her disfigurement be known by the commune’s inhabitants, she would surely be deposed as their leader.  Thomas, the most loyal of village elders and her former lover, comes to her aid; he recruits George, a strapping young, mysterious drifter whom Eva would very much like to seduce, for a twisted, sinister mission.

Eva and Thomas subsequently harangue the young man about the political “necessity” of silencing the doctor and this other young man, and, after their prolonged browbeating, he consents to murder them.  The deed is quickly done offstage between scenes, and the spiral into menace begins. There is no returning from such brutality, George quickly learns, though Eva and Thomas ignore the Pinteresque malevolence of their own devising.

By Act 2 George has become a drunken, jackbooted commander, fortified by his own loyal legions of jackbooted enforcers (shown onscreen) who willingly abandoned their Utopian yearnings, and the play marches forward to its grizzly consequences.

Directed by Ambassador Theater founder Hanna Bonderewska with pressing, even relentless, directness, the three actors soldier on through the long play. As Eva, the lanky and beautiful Sissel Bakken inhabited the character’s lush sensuality—doubtless a key quality of the charisma that drew her followers to her.  Her neurotic preoccupation with the threat to her power fueled her character’s pacing and beseeching, even as Eva, clearly an intelligent woman, remained stubbornly resistant to connecting the dots of her own scheming manipulations. Iconic Washington actor Christopher Henley as Thomas maintained a droll dispassion, holding the machinations of the commune at arms length as if watching the whole proceedings from an ever present puppeteer’s third eye above.  Afflicted as Thomas was with a damaged leg, Henley remained mostly rooted to his perch as Eva and George raged around him, even as Thomas’ own desperation grew.

…familiarized local audiences to the intense and prolific work of the dissident Polish writer Ireneusz  Iredynski.

Matthew Ingraham as George brought a crisp specificity of focus in Act 1, busying himself authentically with intricate stage business-from drinking beer to fixing a motor to packing a duffel bag, while the hyper-drive of his youth raced beneath the surface. In the second act, however, director Bondarewska has Ingraham play the brutal and bitter jackbooted commando at full bellicose volume throughout, and in such an intimate space the effect is more exhausting than cathartic as the play roars toward its ominous conclusion.

There is no going home again, no return to innocence, playwright Iredynski and director Bondarewska reiterate.  There is only the inevitable, militarized march of power toward ever greater, more malignant power until the  freedoms that were there before are obliterated.

The script–the mere writing, much less staging, of which must surely have been an act of suicidal defiance–presses home its point to extreme lengths, a necessary quality perhaps in its original mission of breaking through the group-think of a totalitarian era.  In 21st century USA, however, the heavy handedness of the script and the production further separated those with intimate connection to totalitarianism and those without.  Doubtless, scholars and students and inhabitors of Eastern Bloc, or comparable realities experienced The Third Breast profoundly differently from other folk.

The rough-hewn set by Antonio Petrov was a beckoning, no-frills Eden, a colorful array of draped fabric, nature-based furnishings, a tree, a fence, and a bed with luxurious pillows.  Lighting by Joseph R. Walls bathed the stage in the shifting tones of the story, and sound design by Paul Oehlers and George Gordon enveloped the theatre in idyllic sounds of nature and a gentle rain falling in Act 2, though oddly the actors never responded to the cascading rain. Projections/visual effects by George Gordon further contextualized the bucolic valley, and music by Paul Oehlers, particularly the cheery, commune-welcoming pre-show, established the idealism of the setting.

Ambassador Theater has the worthy (if perhaps thankless mission in stubbornly self-referential USA) of building international cultural awareness and presenting playwrights of global renown to Washington, DC, audiences, and the production of The Third Breast clearly familiarized local audiences to the intense and prolific work of the dissident Polish writer Ireneusz  Iredynski.