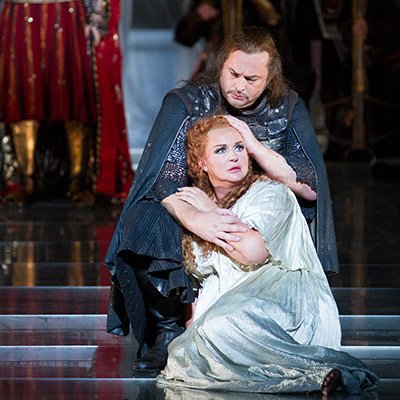 The problem with building an opera around a star is that sometimes, the star will falter.

So even as the cover of the Washington National Opera Playbill of Tristan and Isolde shows Deborah Voigt’s picture and the program itself lists her as star, with artistic director Francesca Zambello promising an “incomparable artist,” Voigt herself had dropped out.  She felt she couldn’t do Richard Wagner’s difficult score the justice she had earlier in her career, she said.

But the opera must go on, and a week before the opening Sunday at the Kennedy Center, the Swedish soprano Irene Theorin, last seen locally in an WNO Sigfried as Brunnhilde, was flown in to take the passionate starring role of Isolde.

She did a fine job, as it turned out, in a role she had played many times before. But it also demonstrated how the grandest of metropolitan operas are actually made of different international elements that combine for a few weeks before dispersing and going off to new jobs.

… an achingly beautiful and stirring score from the large orchestra

So on a stage flown in from Australia, from a director also from Down Under, Neil Armfield (who went back to Sydney to direct “The Ring”), and using singers from the UK, U.S., Germany and Belarus, as well as Theorin’s Sweden, came the big, lengthy Wagnerian opera.

Staging “Tristan and Isolde” as part of Wagner bicentenary leading up to the WNO’s  complete “Ring” cycle in 2016, what stands out in the production is the music, so innovative in its time for its use of yearning, unresolved chords so common today it’s hardly noticed as different, with themes so enduring they can be recognizable to some as having served in film romances from “Vertigo” to “The Artist.”

For those seeking drama and pageantry, there is little. What there is is doled out so slowly it seems like nothing is moving at all. Still, if it makes the music linger, it’s all right. 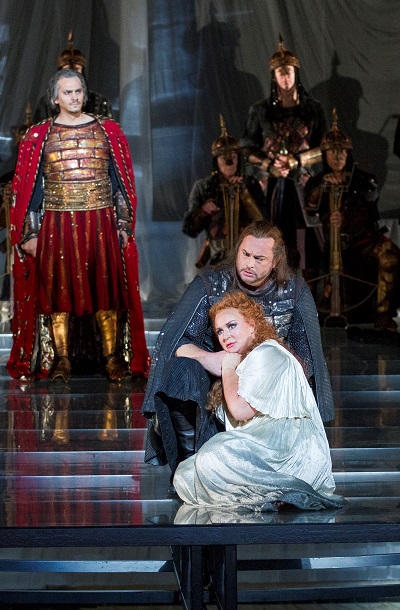 The raked, plexiglass stage by Opera Australia perfectly suggests the Cornwall-bound boat of Isolde in act one, with evocative cables, voluminous curtains waving like sails, and reflections from water that floods the stage below.  But that essentially remains the set once they land as well, disappointingly. On the somewhat abstract stage are the more accurate period costumes of Jennie Tate.

Much of the time on stage is between two or three actors. Only at the end does a full army stand by.

The story of Tristan and Isolde is one of undying love, but surprisingly, it is one of drug-induced love. Isolde hates Tristan for killing her betrothed in Ireland and in seducing her under a different identity before the drama begins. Now being shipped to become unwilling wife of the Cornwall king, she devises to kill her jailer — and herself — with a poison. Instead, her maid mixes up a love potion.

Which can lead to a fate worse than death. For all their stirring emotion, they dread being apart and  would rather die than be separate. And so the tragedy unfolds.

As well as Theorin does in her role as Isolde, the British tenor Ian Storey is not an equal. His voice at times didn’t carry over the orchestra, nor did it seem he had the personality or presence to animate such a large love story.

British baritone James Rutherford, as his companion, makes a bigger impression. American mezzo-soprano Elizabeth Bishop is impressive too in her role as Brangane, the meddling maid of Isolde.

But rating “bravos” as heartfelt as any for the singers was French conductor Philippe Auguin, the music director of the WNO who coaxed an achingly beautiful and stirring score from the large orchestra — a resident providing the best component of the ambitious production.

The Washington National Opera production of Tristan and Isolde continues through Sept. 27 at the Kennedy Center, 2700 F St. NW, Washington, D.C. with showtimes at 6 p.m. For more information, call 202- 467-4600 or go here.