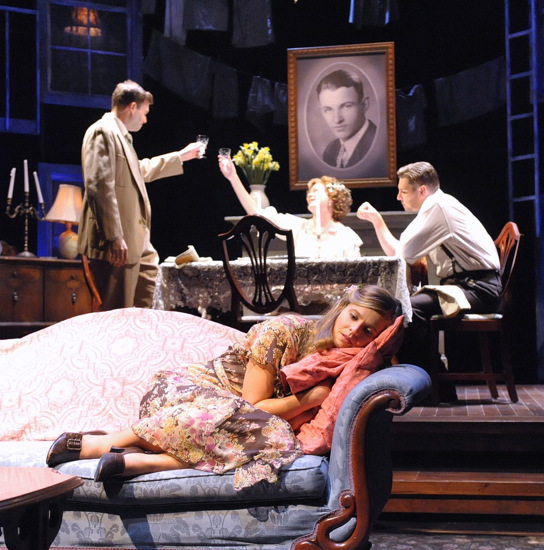 Everyman Theatre opens its 2013-14 season with another production that is both beautiful in design and performance. The Glass Menagerie by Tennessee Williams is considered one of the greatest plays written for the American stage. Everyman is the only company in the country, outside the current Broadway revival, presenting this iconic “memory” play  – a play that begins with a recollection of the past delivered as a monologue by the protagonist. Then the story of that memory is presented on stage.  The lyricism of the narrative and dialogue is pure poetry and reminds us of how great a writer Williams was. Though dotted with bits of humor, this play is a true tragedy of lost dreams.

Tom is both the narrator and character in his own play. “…I am the opposite of a stage magician. He gives you illusion that has the appearance of truth. I give you truth in the pleasant disguise of illusion.” He comes out of the action throughout to speak to the audience in the present to comment on the story as it progresses.

Everyman has done justice to this classic piece of American theater.

Set in St. Louis during the Depression with world events signaling war on the horizon, Tom introduces us to his mother, Amanda Wingfield, as much a force of nature as his sweet, fragile sister Laura, is not. His father, whose handsome portrait looms large over the scene, was a telephone company worker who deserted them 16 years ago after “falling in love with long distance.”

Tom spends his days in a grindingly dull warehouse job to help support the family. He comes home to an alleyway tenement apartment, attempting to find a small space of quiet to write his poetry. But his mother is at him all the time as if he were still a small child. He finds his escape by going to the movies nearly every night  – and in the occasional bender. 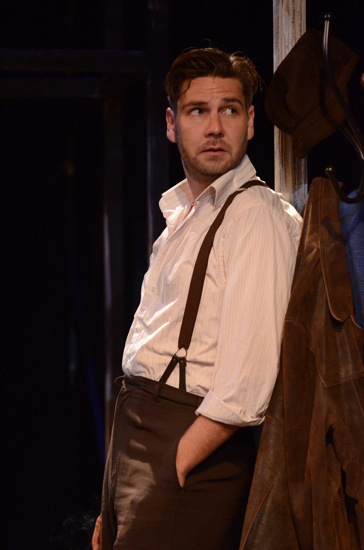 But these characters are all trapped in their own way. Amanda, abandoned by her husband and scraping by while trying to maintain a sense of dignity, escapes be recalling her memories as a popular southern belle, once receiving 17 gentlemen callers in one day. Laura, painfully shy and crippled with a limp since childhood, is so dysfunctional she can barely go out in the world without getting physically ill. Her coping mechanism is listening to the old phonograph records left by her father and in the delicate world of her glass animal collection – her menagerie.

Amanda is driven by her fierce love and even deeper fear for the fate of her children. She is afraid her son will become like her husband and leave. This causes constant friction as Tom fights against her emotional reins for his freedom. But it is Laura who worries her the most. Amanda’s energy focuses on finding a gentleman caller who will become Laura’s husband since it is clear she cannot go out in the world and support herself.

Laura finally gets her gentleman caller when Tom invites a coworker to dinner. Tom and Laura coincidentally went to high school with Jim O’Connor who was popular and talented. He is also the only boy Laura ever liked. Despite the leg brace she had to wear in school and her shyness, he was always kind, giving Laura the nickname “Blue Roses” after he misheard that she had an attack of pleurosis, a disease that causes shorting of the limbs.

All of Amanda’s hopes and prayers for Laura settle on this one young man. Jim is a breath of fresh air in this oppressive environment. Full of energy and ambition, he is cheerful, polite and charming.

The power goes out after dinner (thanks to an unpaid electric bill) and a candelabra sets the scene with Jim and Laura as Amanda maneuvers Tom offstage into the kitchen. As the two reminisce about high school, music floats in from the Paradise Dance Hall across the alley and Jim sweeps her up in a dance. If you were to receive one and only one kiss you entire life, the kiss he gives Laura is done so sweetly and tenderly, it would indeed last a lifetime. And so it must. Meant to give her confidence, Jim realizes he has overstepped and must give her disappointing news. He also accidentally breaks Laura’s most prized glass piece. Surprisingly brave, Laura gives it to him as a souvenir.

This disappointment is too much for Amanda to take and she blames Tom who was unaware of Jim’s personal situation. Laura appears to have finally gone over the edge and escapes into the world of her menagerie as Amanda and Tom fight. This sets in motion his final escape. Tom joins the Merchant Marines but he cannot put enough distance or time in between to escape the memories of his delicate, damaged sister. 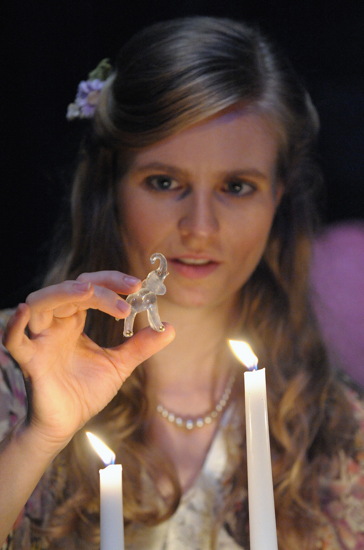 As in August: Osage County and God of Carnage, Deborah Hazlett gives yet another bravura performance as Amanda. She travels the range of emotions from tenderness to anger like virtuoso. Her character chatters incessantly, seemingly without a breath. Amanda is both sympathetic and annoying and Hazlett is able to walk that fine line. Clinton Brandhagen as Tom is excellent, conveying his conflicting emotions and frustrations like an animal pacing in a cage. As Jim, Matthew Schleigh could have moved into parody or conceit as “a gee-whiz” optimist, but his performance is so genuine, you know there is no cruelty in his character. Sophie Hinderberger’s Laura, though heartbreaking, needs a bit more polish that will come as the run progresses.

The production team has taken some of its cues directly from Williams and, under the direction of founding artistic director Vincent M. Lancisi, they have created an ethereal and haunting world of visual beauty. As in Williams’ production notes, downstage is the living room in subtle, faded colors, while upstage a transparent, lacey portière (second curtain) hangs from a free standing proscenium framing the dining room, separating the two rooms. When two scenes are happening at concurrently, the curtain is drawn. For example, the curtain is utilized during one of Amanda and Tom’s arguments which takes place in the dining room while Laura is curled up on the living room couch trying to shut it out.

The set designer Daniel Ettinger creates the illusion of a tenement with several levels of windows and fire escapes with hanging clotheslines. This could have been conceived as ugly but the luminous lighting design by Jay H. Herzog gives it a dreamlike beauty. Hanging lamps of various sizes and shapes can be seen through lace curtains and are spotlighted with a pinkish, purple glow, creating a surreal quality. When we hear the music from the dance hall, the lights of an unseen mirrored ball appear and the colors on the windows subtly change. Music is essential in this play and the sound design by Chas Marsh works in concert with the lighting. He uses early jazz of the time and more delicate, simple sections of music when Laura is on stage.

Everyman has done justice to this classic piece of American theater.