Theatre Review: ‘A Young Lady of Property’ at Rep Stage 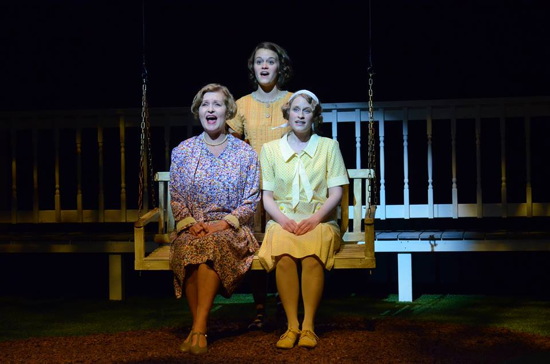 Rep Stage’s A Young Lady of Property is an unobtrusive, atmospheric period piece that takes you back to a simpler time. Set in the 1920’s but written for television in the 1950’s, the play feels very much like a product of its time, with a heavy emphasis on family values. Playwright Horton Foote also wrote the screenplay of To Kill a Mockingbird, and you can see some of the same moral undertones at work in A Young Lady of Property.

In 1920’s Texas, A Young Lady of Property concerns fifteen-year-old Wilma, whose dying mother left her in the care of a distant father and a long-suffering aunt. Wilma unofficially inherits the family house, but her father intends to sell the house after he remarries. Wilma’s single ambition is to become a movie star, but she soon realizes that she wants a real home and a family more than fame and fortune.

With a consistent style and admirable characters, ‘A Young Lady of Property’ kindly reminds its audience to appreciate the simpler things in life— family, friends, and a swing on the front porch.

The staging by Michael Stebbins is minimal and organic, and much of the movement operates with Wilma as its axis. Stebbins roots the play in its intended time and place with a consistent, unhurried pace. The dialogue tends to drag in places, but that seems to stem from the expositional script rather than a lack of attention to detail on the part of the director and cast. For all the long pauses and meandering conversations, every moment has substance, even if the flavor is a little bland for the modern palate. 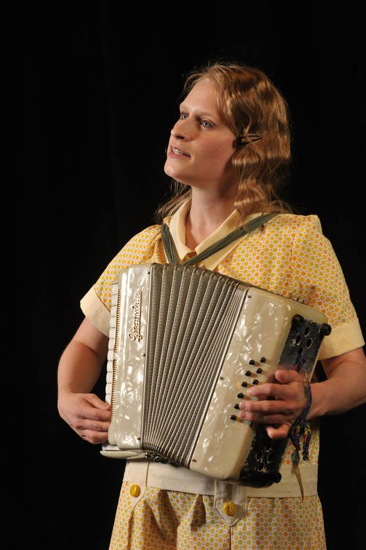 A sound design by Ann Warren calls to mind summer nights on your grandparents’ porch swing, listening to bullfrogs croak (or as we used to say in my family, listening to the corn grow). The scenic design by Greggory Schraven is minimalistic but evocative. The costumes by Kristina Lambdin are true to the period, but the women’s drop-waist dresses look a bit stiff and ill fitted.

Christine Demuth delivers a heartfelt performance as Wilma. She balances Wilma’s need for companionship with fierce independence. She also plays a mean accordion solo. Kathryn Zoerb plays Arabella, Wilma’s sweet, simple second fiddle. Zoerb tempers the precocious Demuth with reservation and shyness. Yvonne Erickson plays Wilma’s aunt Gertrude, and counters Wilma’s wistfulness with a hint of realism. She allows the audience to see how a lifetime of keeping silent about troubles (albeit small ones) can wear down even the toughest veneer. As Minna, the family cook, Erica Lauren McLaughlin is best in moments of solitude, caring for the empty house with the same love she exudes for the human characters. Tony Tsendeas plays all of the male roles, from the friendly neighborhood mailman to Wilma’s estranged father. If you don’t look at the program, you might not realize that it’s the same man in every role, which is a point in Tsendeas’ favor. Marianne Angelella appears briefly as Sibyl Leighton, the woman Wilma’s father plans to marry. Angelella keeps at a respectful, demure distance from the other characters, which makes Sibyl likable even though no one in the town has a good word to say about her. Marilyn Bennett plays the town gossip Martha Davenport, and livens up the pace with good-natured nosiness and comedic relief. 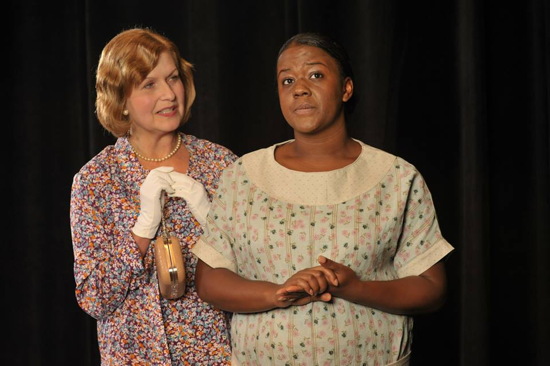 Yvonne Erickson as Gert and Erica McLaughlin as Minna.
Photo by Stan Barouh.

The whole evening is reminiscent of that scene in Thornton Wilder’s Our Town, when Emily’s ghost bids farewell to her butternut tree. Innocent and bittersweet to some, but a bit on the saccharine side for others, this production would be most appealing for audience members who prefer a nostalgic atmosphere to fast-paced action. With a consistent style and admirable characters, A Young Lady of Property kindly reminds its audience to appreciate the simpler things in life— family, friends, and a swing on the front porch.

A Young Lady of Property runs through September 29, 2013 at the Studio Theatre at the Horowitz Center, Howard Community College, 10901 Little Patuxent Parkway, Columbia, MD. For tickets, call the box office at (443) 518-1500 or click here.