Theatre Review: ‘After the Revolution’ at Theater J 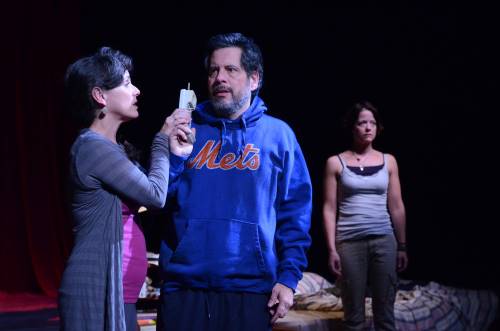 “The question is what side are you on?” Family matriarch Vera Joseph wants to know, but the truth is, the answer isn’t always clear or easy. At least that’s how the characters in playwright Amy Herzog’s After the Revolution would likely respond. This intelligent and thought provoking work, currently running at Theater J, tells the vexing story of a left wing family as they scramble to stay afloat after a weighty political scandal threatens to destroy the legacy they’ve spent generations building.

a highly compelling story with a powerful message and an undeniably human pulse.

It is 1999. Bill Clinton is president. The Soviet Union has collapsed. The Josephs, a family of outspoken leftists and activists are busy fighting oppression and debating all things human rights. At the helm is Emma, a twenty-six year old idealist who has founded a legal fund named for her grandfather, Joe, a communist who was blacklisted for refusing to supply names to the Russians during ­­­­the McCarthy era. Emma’s first case through the foundation is that of long time death row inmate Mumia Abu Jamal. Emma believes that Jamal, much like her grandfather, has also been victimized by a corrupt government. (To those unfamiliar, Jamal, a former Black Panther was sentenced to death for the 1982 shooting of a white police officer in Philadelphia). 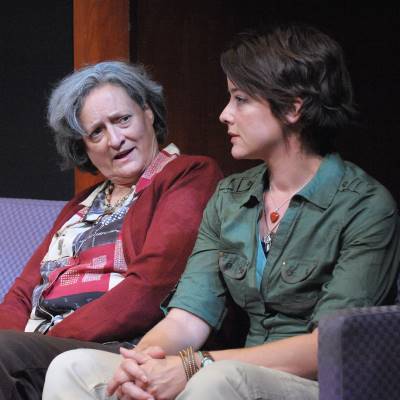 All is well until a scathing publication surfaces, a la the Venona Project, revealing that Emma’s grandfather indeed was a spy for the Russians. In an instant, the myth and the legend of Joe Joseph are shattered and the future of Emma’s legal fund (predicated upon Joe’s heroic legacy) is uncertain. Adding insult to injury is the revelation that Emma’s father Ben, has known about the scandal for years, opting to withhold the secret from his principled daughter.  This betrayal not only creates a seismic rift between the two, but also challenges the moral and political ideologies of the remaining Josephs caught in the middle. And there you have it – a taut family drama and political nail biter all in one.

The bulk of After the Revolution rests on young Emma’s shoulders. Actress Megan Anderson balances the character’s roller coaster of emotions skillfully. As Emma the activist, Anderson is self-assured and articulate. As Emma the daughter, she quickly reverts back to girlhood, suddenly insecure and unsure of how to “be” when in the presence of her ever emphatic father. Emma is a young woman coming into her own and thanks to Anderson’s soft and strong portrayal we sympathize as she struggles to arrive at one difficult decision after another.

As Emma’s well-intentioned father Ben, Peter Birkenhead lends a certain quintessential and relatable quality to the role. Everyone has had or known a dad like this.  Birkenhead is upbeat and enthusiastic making him irresistibly likeable despite his shortcomings and quirks, i.e., decorating his bedroom with pictures of Fidel Castro. While Ben’s animated Marxist soliloquies earn laughs, Birkenhead knows when to drift into placidity allowing the character’s humanness and genuine concern to shine through.

The remaining cast solidly represents the familiar archetypes present in nearly every American family.  Elizabeth Jernigan is perfectly mellow and unassuming as Emma’s less successful yet more troubled younger sister, Jess. Susan Rome lends a calm, level-headed and maternal quality to her role as Mel, Ben’s second wife and step-mother to his children.

Jeff Allin brings an everyman sensibility to the character of Ben’s brother Leo. His matter-of-fact approach to the dialogue makes him immediately recognizable as a sort of cool uncle figure. Likewise Allin’s easy demeanor counters nicely against Ben’s mostly excitable nature. Similarly, Carlos Saldana is the yin to Megan Anderson’s yang as Emma’s feminist boyfriend, Miguel. Saldana’s pleasant, good guy behavior is the perfect balance to Emma’s building hysteria as her world crumbles around her. 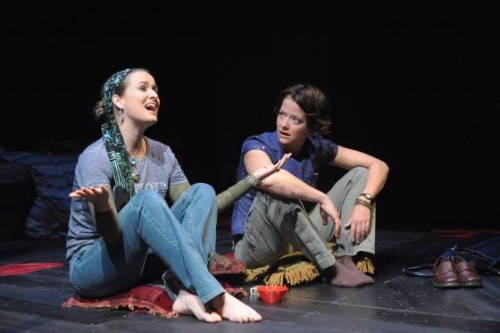 Every story about family needs a sage, a wise elder to serve as the voice of reason. It just so happens that Herzog has written two into this tale. James Slaughter is a funny and charming breath of fresh air as benefactor and Joseph family friend, Morty. While youth and inexperience prevent Emma from seeing the light at the end of the tunnel, Morty’s age and knowledge allow him a more learned insight to the legal fund debacle. Slaughter is jovial and reassuring, a calming presence and a welcome reprieve from the story’s heavier moments.

And as Joseph family matriarch, Vera, Nancy Robinette is a dynamic and versatile fixture from beginning to end. Vera may be hard of hearing, but she is always listening, always watching with a learned eye. The character like all grandmothers of a certain age, has earned the right to speak her uncensored mind. Robinette does just so with edge, control and quiet authority. She is a twinge acerbic yet delightfully so. Her coolly delivered criticisms both amuse and resonate with the audience.

Visually, the set of After the Revolution, designed by Misha Kachman, is as dramatic as the story itself. A large velvety red curtain hangs, almost forebodingly upstage. The black stage floor is splashed with red paint as well. “Communist red” perhaps? The rest of the set is a functional array of everyday furniture – a bed here, a sofa there – allowing for quick transitions between scenes.  Likewise lighting designer Andrew Cissna effectively uses spotlight to guide us from one scene to the next. The technique has an almost musical, poetic and experimental feel to it.

Recycling personalities from her popular play, 4000 Miles, Amy Herzog creates the same tense dialogue and moral ambiguity in After the Revolution.  With the lines blurred between the Joseph’s personal and political identities, making determinations about what is “right” or “wrong” is excruciating for Herzog’s three dimensional characters yet all the more exciting and relatable to the audience. Thanks to director Eleanor Holdridge this play is opinionated without being preachy and gently paced without losing its initial verve. Strip away the communist rhetoric, the monologues about education reform and the commentary on institutional racism and you still have a highly compelling story with a powerful message and an undeniably human pulse.