Theatre Review: ‘Agnes under the Big Top’ at Forum Theatre in residence at Round House Theatre Silver Spring 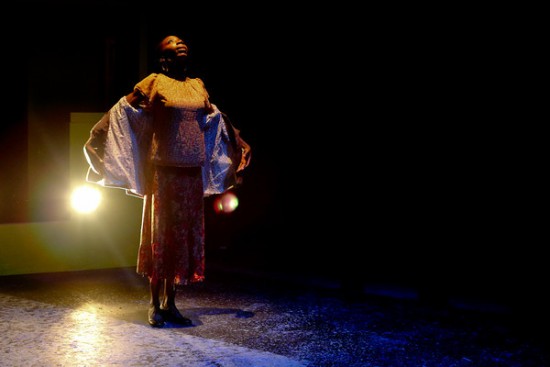 There is much to love about Forum Theatre’s season opening Agnes under the Big Top now playing at its Silver Spring location.

The play by Aditi Brennan Kapil has poetic brilliance at times, with charm and insight throughout as it explores the immigrant experience and the transformations that take place as people move from abroad to here and beyond.

From the get-go, Jon Jon Johnson entertains us with his lively violining-busker.  His violin will sing throughout the proceedings.

…most certainly worth the journey.

Edward Christian turns in an authentic portrayal of Shipkov, a Bulgarian immigrant with a feisty (if dark) perspective on life.  His enigmatic wife Roza, played absorbingly by Nora Achrati, has an equally dark, disturbing view of life’s vicissitudes. 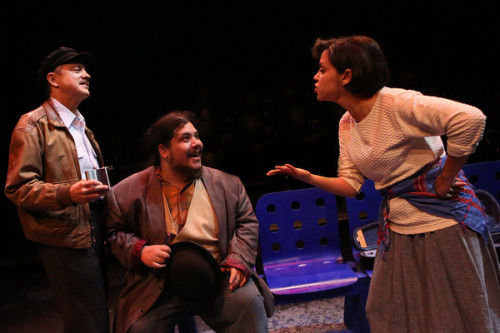 Happy, the Indian played by Jason Glass, whose nickname and respect for Karma are his life’s guiding principles, keeps the audience riveted with concern for his future.

Annie Houston’s Ella, bedridden and fading, captures with precision the mental tape loop of the elderly and alone.

Finally, there is Joy Jones, who many may remember from her ensemble work in last season’s Invisible Man at Studio Theatre.  She plays the title character, the Liberian Agnes who leaves home, and her young son, to come to the United States of America looking for wealth and happiness, only to find cancer and death.

So much to love, even if Agnes’ themes swirl around the darkers aspects of life!

And then there are the design elements.  Steven Royal’s set transports us to the metaphorical big top using his alley staging and Lego-like settings while lighting designer Katie McCreary punctuates scenic and tonal changes with subtlety.

Director Michael Dove has handled the multiple scene changes and time warps with great visual dexterity, keeping the play moving and interesting at the same time.

With all this going for Agnes under the Big Top one might assume that Forum has a smash hit on its opening of the season hands, but one would be wrong.  For despite the many positives Kapil’s script and Forum’s production elements do not always work together to achieve a viable, sustaining story.

Rather, the audience is left with that annoying crick in the neck that signals: what you have just witnessed is more of a fabulous curiosity than a viable play.  It has notable moments but it does not coalesce at the end, or even later as its pieces settle (one hopes) into place.  For the various elements of this production of Agnes under the Big Top do not settle into place.  And the audience leaves not quite knowing what it has just witnessed. 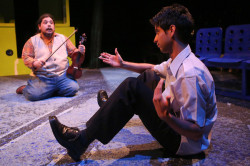 To be sure, its idiosyncratic characters win us over even as the play’s story swirls in confusion.  Ella, lonely in her bed, talks to the voice-recorder her son has connected to his phone.  Even the birds’ singing (Johnson’s violin) annoys her. Her two attendants, Agnes and Roza, seldom engage her except in the most perfunctory of manners.  Roza’s husband Shipkov drives a subway train and now has a new trainee, the forever happy Happy.  The Busker appears here and there, taking on various characters at various times. The plot of the play exists in fragments, sometimes beginning at the end and flashing backwards; at other times just beginning at the end.

I might look at the script and say that Kapil left too many unknowns floating in the debris of her text.  Her poetic construction and use of metaphor, though a welcome addition to today’s theatrical fare, ultimately fail to illuminate a larger purpose.  We experience these characters’ lives and understand their hopes for a larger-than-life life but without ever sensing their so-what.  Instead, their failures hang under the big top without a chance at redemption.

I might look at Michael Dove’s work on the script and say that in his approach he did not take the script’s metaphorical elements far enough.  So instead of a production that transported its audience through the play’s bird imagery into an unimaginable spiritual dimension it fluttered around the edges of the metaphysical without piercing the fog.

I might look at Joy Jones and her embodiment of Agnes, the Liberian immigrant who suddenly discovers that she has cancer and only a couple of weeks to live and say that what the script lacked in clarity of Agnes’s development she needed to provide with impeccable physical acting.

Regardless of the cause, this production of this tall tale enchants without fulfilling its promise.

Which is not to say the enchantment is not worth it, for it most definitely is.  Ms. Kapil’s theatrically poetic play reaches beyond the clear cut and the known, challenging audiences and producers to make less than tangible connections between the real world of subways and at-home hospital care and the mysterious aspirations driving people to make more of this world than seems humanly possible.  Such hopes have always been at the heart of the immigrant experience; such mindless travel and sad fates continue to await us all.  If some play, or poem, or movie out there might shed even a ray of clarity upon that riddle, then it’s worth the journey.

Such is Forum’s Agnes under the Big Tent—most certainly worth the journey.

Advisory: challenging material and some profanity.