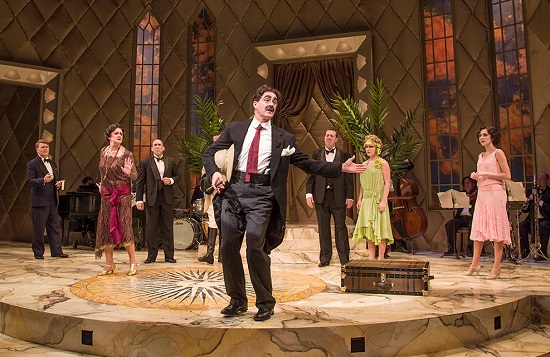 The company of ‘Animal Crackers’ at Center Stage. Photo by Richard Anderson.

“It’s hard to overstate the genius of the Marx Brothers,” says Center Stage Artistic Director Kwame Kwei-Armah during rehearsals for Animal Crackers. “This is high-flying, laugh-a-minute lunacy at its best, and I can’t wait to see families and kids of all ages come together to enjoy this remarkable musical comedy.”

He was right on the money.  This one is a doozey that induces eye-tearing laughter from soup to nuts.  Opening its 51st season, Center Stage brought to its Pearlstone theater stage the old Marx Brothers-led madcap musical comedy Animal Crackers.  The seemingly timeless production with music and lyrics by Bert Kalmar and Harry Ruby and a book by George S. Kaufman and Morrie Ryskind opened in 1928 towards the end of the vaudevillian era.  When sound pictures were gaining popularity, it was filmed as a movie in 1930.

a rip-roaring escape from normalcy.

Veteran director BJ Jones stayed true to the movie and added a clever insertion of a few Baltimore references sprinkled throughout as well as a few comic bits by the onstage musical conductor/piano player Laura Burgquist to keep the hometown audience smiling. Not that it needed to as the entire production gave reason to smile and laugh, and laugh hard.

The comic brilliance of the Marx brothers is well captured by the superb cast led by the Everyman Theatre’s resident actor Bruce Randolph Nelson who returns to Center Stage after his successful stint as the delirious and dying Edgar Allan Poe last year.  Groucho Marx whose nutty character Captain Spaulding, a famous African explorer who visits the Rittenhouse mansion on Long Island where a madcap party honoring him unfolds during which paintings are stolen, Nelson, showcasing his stage versatility with old-time vaudevillian comedic prowess, impersonated Groucho and his attendant shtick to the delight of the audience.

He adroitly reproduces Groucho’s signature walk, dance moves, mannerisms and caustic retorts with near perfection.  And combined with the costuming by David Burdick and the wig, glasses, fake eyebrows and moustache, Nelson’s resemblance to Groucho is uncannily spot-on.

Also deserving much credit is Paul Kalina who directed the physical comedy components that unfolds throughout the production and provokes much of the laughter.  If this brand of physical slapstick did not work, the production would be ineffective.  However, it not only worked, it excelled.

The sensational performance by Brad Aldous who plays the non-speaking Harpo Marx role as the near-perverted Professor, bumped into, tangled with and literally fell over other cast members with precise timing and coordination.  The female actors, in particular Catherine Smitko, playing the Margaret Dumont comic foil to Groucho as Mrs. Rittehouse, are frequent targets of the Professor’s loopy, physical antics, and they are great. 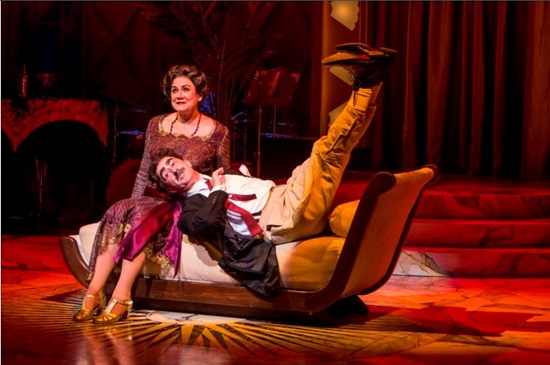 Jonathan Brody in the Chico Marx role as Emmanuel Ravelli is equally proficient in his impersonation skills.  Blessed with great lines, he does so with flair and perfect timing with the Chico-Italian accent working exceptionally.  Mr. Brody also demonstrates fine piano ability when those opportunities arise during the production.

“Three Little Words” is a well-staged and executed tap dance number featuring Dina DiCostanzo as daughter Arabella Rittenhouse and John Scherer as Wally Winston, Arabella’s love interest and a high society gossip reporter for The Evening Traffic hunting for a breakthrough story.  Both were excellent playing their characters.

Sean Blake, in the dual roles of Hives, the butler in the Rittenhouse mansion and Roscoe Chandler, a tycoon, is simply outstanding.  Campy through and through, Blake’s performance hit the mark and solidifies the production. He also opens the second act with a spirited, comical number “Keep Your Undershirt On.”   Other actors called upon to play multiple roles include Erin Kommor, Dina DiCostanzo, Sean Montgomery and John Scherer, and they do so quite well.

While comedy is the main ingredient in this romp, Kalmar and Ruby’s music should not be overlooked.  “Why Am I So Romantic?” is a sweet duet featuring Erin Kommor and Sean Montgomery.  They ably team up again in “Watching the Clouds Roll By.”  A crowd favorite is “Show Me a Rose,” a duet with Nelson and Smitko.

Another popular song is the hilarious “Four of the Three Musketeers” performed by Nelson, Brody, Montgomery and yes, Aldous though not singing, neatly rounded out the four musketeers.

Then there is the production’s most familiar song “Hooray for Captain Spaulding” during the early moments of the show.  A funny, shtick-laden number, gloriously performed by the company with Nelson as a standout, the catchy melody is as familiar as the show and movie itself.  It stuck to Groucho Marx like Velcro, and that theme song followed him around as his personal theme song during his days as a television personality beginning in 1950.

The six-piece on-stage orchestra led by Laura Bergquist did a fine job of backing the performances and not overpowering them.  And, as mentioned previously, they contributed some comical moments.

There is only one set, designed splendidly by Neil Patel —an ornate hall that has a heavy deco accent and marble floors —popular in 1920’s and 1930’s mansions.  This was enhanced by the lighting design by Mark McCullough casting pastel hues depending on the musical number.

Except for Nelson, the veteran cast is making their Center Stage debuts.  They all seem comfortable and breezy in this off-the-wall musical comedy, under the meticulous direction of BJ Jones, and they delivered sparkling performances.  Backed up by a proficient creative team, all I can say is “hooray for Center Stage and Animal Crackers,” a rip-roaring escape from normalcy.

Running time: Two hours and 15 minutes with an intermission.