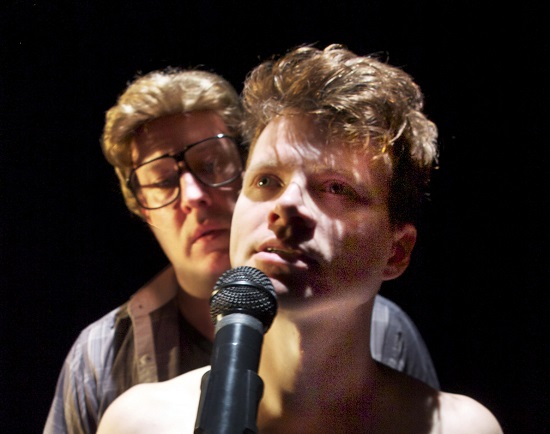 Joseph W. Ritsch as Jeff and Will Manning as the Victim. Photo by Daniel Ettinger.

These were the pick-up lines that serial killer Jeffrey Dahmer used in bars around Milwaukee to lure young men back to his apartment.  The Iron Crow Theatre Company’s presentation of Apartment 213, currently playing at the Theatre Project, repeats those lines throughout Joseph W. Ritsch’s intense one-hour drama.  Apartment 213 has been brought back by Iron Crow with the same cast and director following a successful run in July 2011.

Under the direction of Stephen Nunns, the play attempts to examine the dark, inner psyche of Dahmer using multi-media, imagination and proficient acting that raises more questions as to Dahmer’s motives than it answers.

Jeffrey Dahmer, a Milwaukee chocolate factory worker, committed the rape, murder and dismemberment of 17 men and boys between 1978 and 1991 with many of his later murders also involving necrophilia, cannibalism and the permanent preservation of body parts—typically all or part of the skeletal structure—in his freezer.  He was ultimately arrested and convicted of his crimes in the summer of 1991 and was eventually murdered while in prison.

a good but chilling theatrical experience

Fitting the horrors that had taken place, the play is dark, the sets are stark, and it keeps the audience in stone-cold silence as the play meanders through the workings of the mind of a madman.  Ritsch, a co-founder of Iron Crow and who has recently been named Co-Producing Artistic Director of the Helen Hayes Award-winning Rep Stage, effectively reprises the role of “Jeff.”  Ritsch also designed the set and costumes and co-designed the sound with Bryan Schlein to adroitly bring his words to life. Will Manning, as the Victim (a symbolic representation of all of Dahmer’s victims) turns in a solid performance, which starts a quarter of the way into the play.

Darkness is an apt metaphor for Apartment 213.  The auditorium is unusually dim as the audience takes their seats while ominous music is played, setting the mood.  The set is gloomy and sparse with a fish tank containing five or six live goldfish placed in the center on the floor.  Downstage in a corner there is a small box-like footlocker.  Upstage there is dreary sofa and a pole lamp.

As the play opens up, a partially visible alive young man is shirtless sitting on the sofa with his back towards the audience.  The names of Dahmer’s victims, their ages and dates of the murders are seen on a projection screen behind the stage.  Jeff then moves about the apartment repeating his standard pick-up lines and continually taking photos with a Polaroid.

He stands at a mic and speaks with his words amplified by reverberations and Alec Lawson’s lighting effects to add more chill to the atmosphere.  As he speaks, black and white shots from stills and films are projected on the screen.  Somber music is played, words are uttered, and images displayed to depict a confused, irrational mind.

The stage is conceived to be Dahmer’s mind.  He keeps track of each victim with Polaroid shots and notes surrounding the floor of the stage as if they were compartmentally lodged in the crevices of his brain.

When engaged with the Victim, he comes off charming, if not strange.  The Victim finds Jeff “adorable.”  He asks what is in that box.  Dahmer doesn’t tell him, but as the Victim retreats to the sofa as if drifting out of reality, Jeff opens the box and pulls out a facsimile of a head.  Then in another area of his apartment, he drags out separately the pair of legs and the torso and re-attaches them and starts to “make love” with the remains.

Eventually, Jeff strangles the Victim with no clear motive: no anger, no argument, no robbery.  Jeff picks up the corpse and dances with the lifeless, limp body.  Manning’s performance in this regard is outstanding.  Drama training teaches students how to act dead while lying on a floor.  It does not instruct actors how to dance while dead.  Both Manning and Ritsch pulled it off brilliantly.

Through this play we know that Dahmer had a compulsion for bringing young men back to kill them and dismember them.  He also had a fixation on his fish, which explains the fish tank’s prominent location on the stage—like it’s the center of Dahmer’s universe.  In his psyche, the victims sprout wings as if they were angels.  We don’t learn the connection, and there is no ostensible attempt to explain his twisted nature.

The play succeeds in depicting a chilling period when innocent victims are taken in by Dahmer’s charm.  It avoids the sensationalism, though, as the gore and cannibalism that most of us associate with Jeffrey Dahmer is left for the audience’s imagination.

Apartment 213 is not a feel-good play; there are no heroes.  Ritsch’s work ably conveys the tragedies that such a person can bring to bear and how futile it is to understand the motives.  You won’t leave theater humming a tune, smiling and feeling happy.  Instead, you are transported into the disturbed, macabre mind of a serial killer who cannot help himself.  But the excellent technical elements and Nunns’ direction combined with capable performances combine to make this a good but chilling theatrical experience and is recommended.

Advisory:  the play contains nudity and adult themes and is not recommended for children.