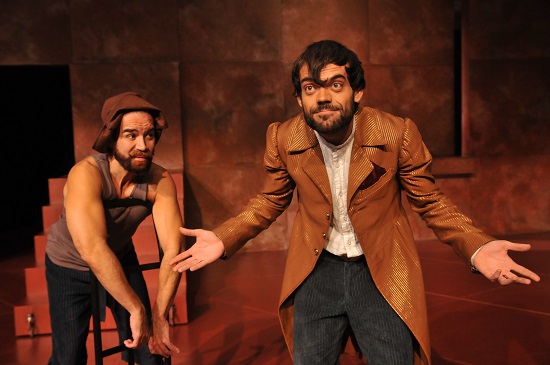 Back in the 17th Century, theater in Spain was so rich, even the intervals between acts were entertaining. Sketches performed in the streets to engage with passerby led to their becoming part of their royal performances.

And in the 21st century some of these interludes have been stitched together as songs and scenes in “Cabaret Barroco – Interludes of Spain’s Golden Age,” making a world premiere at the GALA Hispanic Theatre in D.C., kicking off its 38th season.

Directed with zest and authority by Jose Luis Arellano Garcia from Madrid, the pieces are individually and rather elaborately introduced in the two acts, but are stitched together with songs made of poems for a work that plays like a seamless contemporary cabaret. 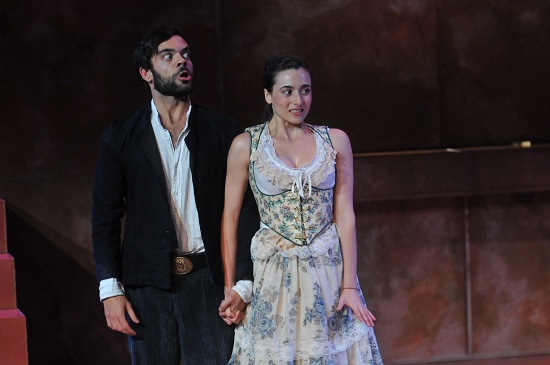 The collaboration with the Spain’s artist’s collective Accion Sur means the work is presented in Spanish with English surtitles, but there hardly seems any language barrier at all. When the subject is love, little translation is needed.  Then as now, love meant longing, pain, jealousy and retribution but also a matchless feeling that makes it all worthwhile.

On a clean but versatile stage set by Giorgos Tsappas, the international cast of four men and four women portray people trapped in the throes of love. In one clever piece, a hapless man who wants a woman to love him gets assurance from a witch that if the woman reads a spell she gives him, she most surely will. Alas, she cannot read, so when she asks some men to read it for her, so they fall in love with the would-be suitor.  In another, a woman strings along a rich but boorish man to keep getting his lavish gifts, but her girlfriends won’t help her keep her secret, hoping to cash in themselves. In a third, a bullfight is meant as a way to win a heart, if the heartsick man can survive.

In many of the works, the audience is engaged, just as they would have been in the streets of Boroque, Spain. Some are asked to dance, others are given wine, still others provide unexpected laps for perching actors. An opening night audience was somewhat open to these overtures, though it included the Spanish ambassador to the United States, whose embassy helped support the production. 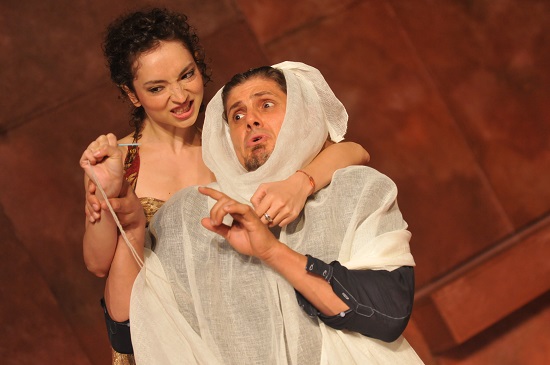 The lively and talented cast of “Cabaret Barroco” succeeded in bringing the show alive, proving adept at any part they were asked to do,working exceedingly well together, as if they’d been doing these interludes in the streets for years.  Among them are Spain’s Gonzalo Bouza, now living in New York, who is an engaging and versatile presence; the exuberant and expressive guest artist Chani Martin of Spain; Jimmy Navarro, a strapping talent from Puerto Rico; and GALA’s own Carlos Castillo, originally of Venezuela, who is an accomplished comic force.

The women each bring something as well and also prove to have the upper hand in most of the pieces. Longtime Spanish actor Luz Nicholas, now living in Baltimore, is making her first GALA appearance and will likely not be her last. Madrid native Carmen Cabrera, now of New York; and GALA returnees Menchu Esteban, a native of Spain, and Natalia Miranda-Guzman, originally from Chile, add a flirty sparkle and just the right expression to their many roles.

The main drawback to the breezy and entertaining evening is having the backing music of the songs all on tape, when live musicians would have added a much more vivid presence, just as the lively actors do.