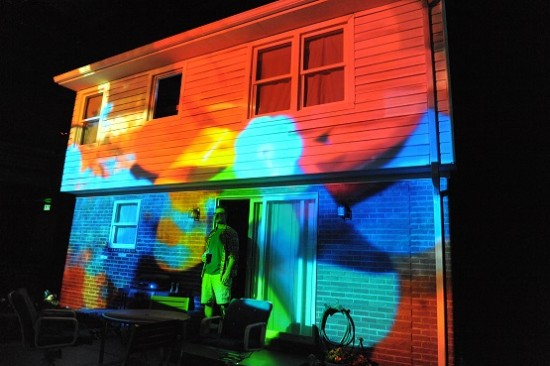 Lisa D’Amour’s Detroit, now playing at Woolly Mammoth Theatre Company, uses the currently bankrupt Motor City as a symbol not a place, as that point of nostalgia when America—fresh from victory in World War II—built dreams of a beautiful way of life and planted them in suburbia.

The distance between that Utopian dream and the emptiness of today’s reality is the dark comedic theme of this Detroit and its symbol. To be sure, it is not a new idea.  In the 1980s endless talk reverberated throughout DC on how to revive urban America, with Washington’s own downtown blighted by lack of investment.  Woolly’s current home is but one indication of a successful grand gentrification.

D’Amour’s Detroit takes its audience to the low tide of that renewal process, the inner suburban’s present decaying infrastructure.

We meet the neighbors.  Ben and Mary have lived in their home for several years.  Sharon and Kenny have just moved in next door. We meet them at that most iconic of suburban events—the outdoor cookout with steak and potatoes and as few vegetables as possible.

The ensemble work in this production is absolutely superb. 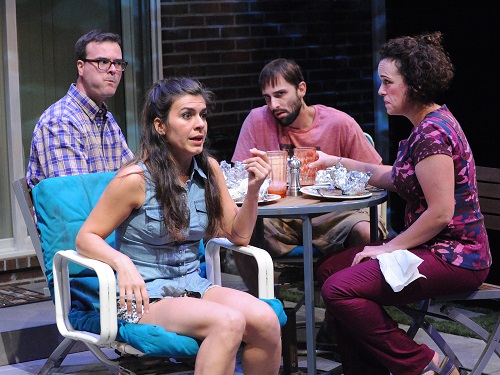 With Tim Getman as the “I want to be British” Ben and Emily K. Townley as the “why doesn’t anyone like me” Mary, we get the 30-something childless couple who have fallen on hard times.  Ben has been laid-off from his financial company, while Mary does her paralegal work without enthusiasm.  But hope is in the air.  Ben is building a website and will soon be launching his own online business as a financial consultant, and Mary … well, Mary is just hoping that Ben hasn’t become addicted to pornography.

Getman’s Ben exudes the suburban white collar worker who has too much time on his hands and not enough structure.  We never know exactly what he is thinking but he sure knows how to grill a steak.  Mary, on the other hand, both drinks and says too much, and Townley captures her inner desperation with total clarity.

The new mystery couple on the block consists of Gabriela Fernández-Coffey as the “watch me bounce of the walls” Sharon and Danny Gavigan as the “I’m so happy I can watch Sharon” Kenny.  Both recovering drug addicts, Sharon and Kenny have committed to building a new life for themselves.  Employed and happy, they recommit themselves to that goal every day.

Fernández-Coffey nails Sharon’s hyper-driven enthusiasm to perfection, making the character not only “off the wall” in her mannerisms but flashing with vulnerabilities—too open, too exposed, too needy for others.  Gavigan gives Kenny a laidback roughness that compliments wonderfully Sharon’s boundless energy.  Later, when Kenny strays off the wagon, Gavigan reveals Kenny’s unchecked primal recklessness. 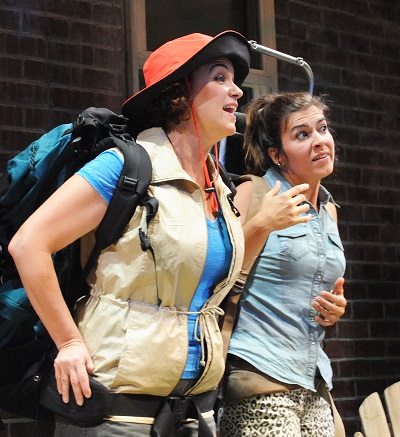 We meet the two couples on the first day of their friendship—a joyous discovery of neighbors as an awkward, fast-paced exposé of how not to live your life.  We quickly learn that even though Ben and Mary have lived in the area for many years they have no friends and have seemingly built no memories.  Sharon and Kenny, on the other hand, even though they have no money to buy any furniture (the rented home has only one ugly chair and a mattress), they have a lot of fond memories: unfortunately, however, all those memories are soaked in days freebasing heroin, rendering them more dangerous than pleasant.

In other words, what we learn is that all four of these people are in desperate need of the new lives they are hoping to construct upon the rough soil of their decaying suburban neighborhood.

Perhaps D’Amour is familiar with that biblical verse: “Neither do men put new wine into old bottles: else the bottles break, and the wine runneth out, and the bottles perish: but they put new wine into new bottles, and both are preserved.”  If not, her Detroit lives as testimony to the rightness of that saying; for her four addicts—two acknowledged, the other two coming to see the light—are most definitely trying to build their new lives within an old framework, and they are destined to fail.

In the final scene, when the fifth member of the cast, Michael Willis, enters as old timer Frank with his simple yet clear view of the world, he reveals just how inevitable most of the action of the play really is.

The beauty of D’Amour’s play is that its human failure never felt so good: you don’t often get a chance to laugh at other people’s misery so loud or so often and not feel guilty afterwards.  When at the end, she sends in her Deus ex machine she does so not to save the day, but to put these folks out of their misery.

And maybe this time they will be able to start a new life for real.