Theatre Review: ‘In The Heights’ at Walnut Street Theatre in PA 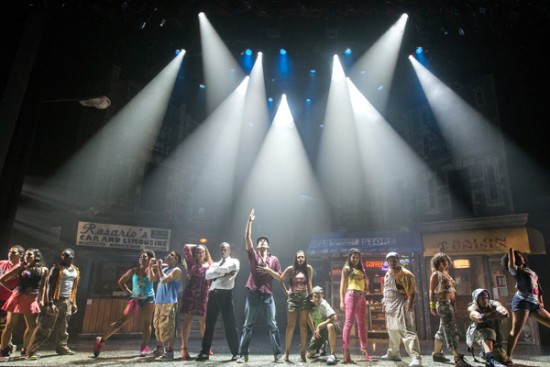 The cast of ‘In the Heights.” Production photos by Mark Garvin.

Sometimes seeing a show for a second time with several years in between viewings, makes me appreciate it more. When I saw the 2008 Tony Award winning musical In The Heights originally, I thought it had a good score by Lin-Manuel Miranda and talented cast, but I knew where the book by Quiara Alegría Hudes was going the whole show. On top of that, the stage was so busy you didn’t know where to look.

Philadelphia’s Walnut Street Theatre opens their 205th season with a much more focused production of the show. It still has the score that I remembered enjoying in NY, but now the book is more focused so as the plot unfolds you actually care about the characters. Add to this, a cast comprised of some veterans from other productions, and in one case a young lady making her professional debut, and this In The Heights visually and dramatically is a winner!

The show takes place on a block in Washington Heights, Manhattan, and the story concerns the people who live on and inhabit the block. There are plenty of colorful characters. We have our bodega owner Usnavi (Perry Young) who is trying to teach his cousin Sonny (Matthew J. Harris) a thing or two about responsibility by giving him a job at the bodega. We have Kevin and Camila (Danny Bolero and Kimberly S. Fairbanks) who run a car service. Their daughter Nina (Julia Hunter) has dropped out of college and returned home but her folks don’t know this at the top of the show. Benny (Rhett George) is an African American who works at the car service and has been sweet on Nina for a long time. Her father swears that Benny will never be a member of the family even though he has known them for a long time. Abuela Claudia (Ryanne Gonzales) is the mother hen of the block and has lived there for years and years. Everyone looks out for her especially Usnavi who is constantly on her to take her heart medication. There are the three ladies of the beauty salon, Carla, Daniella and Vanessa (Maria Konstantinidis, Donnie Hammond and Gisel Jimenez). The shop is moving out of the neighborhood and Vanessa couldn’t be happier as she has been looking to get out and move downtown for awhile. Unfortunately she has a rough go of it as her mother is an alcoholic. Last but not least there is Graffiti Pete (Ceasar F. Barajas) whose name is for obvious reasons and the Piragua Guy (Carlos Lopez) who is in constant competition with Mr. Softee for customers. 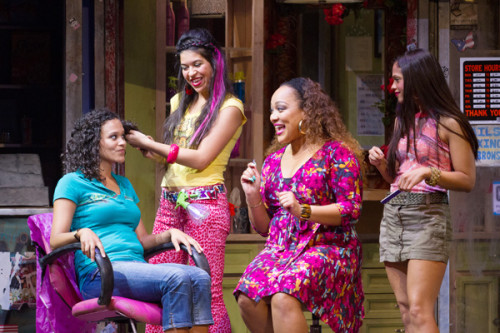 Over two nights these folks endure a blackout, looting, losing one of their own, falling in love and in the end, appreciation for what they have and where they live. Yes that is a lot to cram into an evening and this is why I said this production is better than the original. Director Bruce Lumpkin has focused each of the plotlines so the songs enhance the action instead of stopping it. The show has a lot of music so this is a welcome change from NY.

The cast is quite wonderful and it’s hard to pick standouts but I want to mention two in particular. First off is Perry Young as Usnavi, which is the role Lin-Manuel Miranda created on Broadway. Young played this role in the national tour and it’s apparent that he really enjoys returning to it at Walnut Street Theatre. His character speaks in rap a lot of the time and Young breezes through these sections with great ease, and he is a top notch actor and dancer as well.

Secondly there is an actress making her professional debut in the role of Nina that impressed me from the first time she opened her mouth. Her name is Julia Hunter and folks this young lady has a bright future ahead of her. Her vocals on “Everything I Know” were moving and touching and her acting matches her singing. Remember the name Julia Hunter so when she wins an award for something down the line you can say “Hey MTG gave her a shout out!”

Everyone else rises to the challenge of this physically demanding show. Ryanne Gonzales performs her star turn “Paciencia y Fe” (“Patience and Faith”) just wonderfully while Carlos Lopez is light on his feet in a song called what else… “Piragua.” 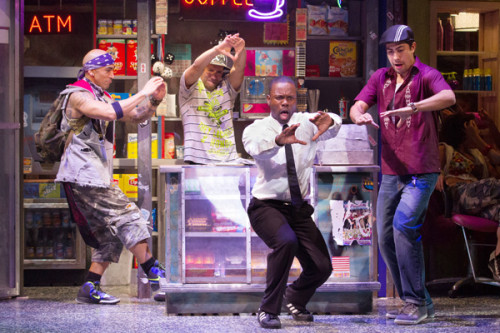 The ensemble of dancers performs Michelle Gaudette’s choreography with lots of energy and enthusiasm. This is a heavy dance show and Gaudette’s work is visually stunning and fuses a lot of different forms of dance together. I particularly enjoyed her work in “The Club.”

The show is heavy on singing too and Music and Vocal Director Douglas G. Lutz, as always, gets the best sounds out of his performers. He is also using the original tour orchestration which features nine fantastic musicians. Listening to the score again it’s easy to understand why Miranda’s score and the orchestrations by Alex Lacamoire and Bill Sherman both won Tony Awards. Whether it’s the big title song or a quieter number like “Alabanza” Miranda’s score captures everything that is put forth in Hudes’ book.

Physical elements match the performances. Anna Louizos’ scaled down version of her Broadway set still serves the production well while Paul Black’s lighting reflects the mood of the action. One minute it can be joyous and the next it can be more solemn. Kudos to sound designer Ed Chapman for making it so I can understand all of the words as opposed to what it sounded like in NY.

In the end In The Heights is a musical that is filled with joy and heartbreak. There are many emotions you feel while watching this production and this is because the cast under Lumpkin’s watch make the show very real for the audience. It’s as if you are on that block and up close with these people. This is the sign of artists that know what they are doing and all involved with In The Heights at Walnut Street Theatre should be very proud of themselves. Take a day trip to Philly, have a cheese steak at Jim’s on South Street and check out In The Heights at America’s Oldest Theatre. Now that’s reason enough isn’t it?

In The Heights plays through October 20th, 2013 at Walnut Street Theatre which is located at 825 Walnut Street in Philadelphia, PA. Tickets can be purchased over the phone, at the box office or online.