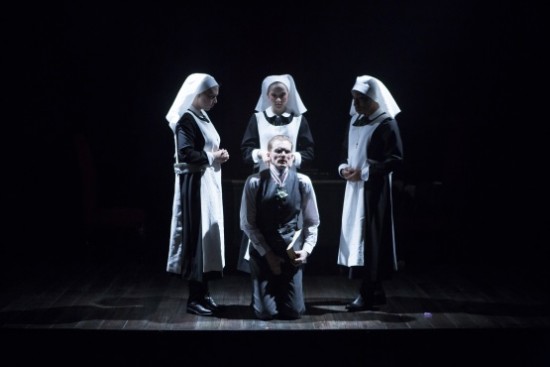 In the masterful hands of Director Jonathan Munby, Shakespeare Theatre has taken Measure for Measure, one of the Bard’s darker “problem comedies,” and transported it to the hedonistic turned sadistic pre-war 1930’s Vienna. “Cabaret” meets Shakespeare in this breathtakingly contemporary production.

The story, in brief, is this. Jolted by the decadence of his society and disturbed by his own uncertain sexuality, the Duke departs for a spiritual retreat, leaving the Fascistic, moral hypocrite Angelo in charge.

A wildly theatrical and engaging production.

Young Claudio and his betrothed, Juliet, have consummated their relationship before marriage, impregnating Juliet; for this grievous moral offense Angelo sentences Claudio to death.  Claudio’s sister, the chaste, soon-to-be-a-nun Isabella, appeals to Angelo for mercy for her brother.

Angelo, however, suddenly smitten with lust for Isabella, offers to commute the sentence only if she will have sex with him. Outraged, Isabella tells Claudio of the offer; Claudio, not wishing to die, asks her to do it.  And therein is the rub.

In Munby’s vision, the culture war over sexuality at the heart of the conflict takes on global relevance. With characteristic prescience, the moral dilemma Shakespeare pondered 500 years ago is once again rising to the surface in much of the world today. 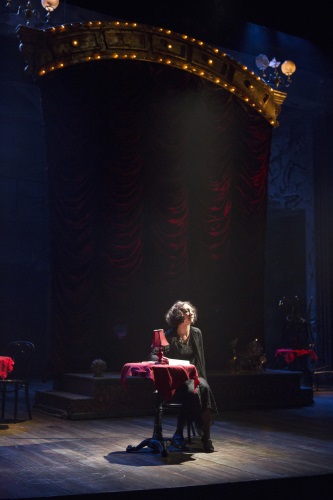 Is a woman’s virginity more precious than life?

In a post sexual revolution, post women’s movement, post gay rights movement America where the oft-cited statistic is that 1 in 4 women will be sexually assaulted in her lifetime, the answer for most of us is a resounding, “No!”  Survival in such cases absolutely trumps virginity, but that is not the point.  In Munby’s hands, Measure for Measure is not a play about virginity; it is a play about sexual agency, past and present.

Whatever solace the West can take in the advancement of sexual liberty for all consenting adults, we ignore the past at our peril. However much free-minded people may rejoice in the triumphs of marriage equality or in the revolutionarily inclusive remarks of Pope Francis, we dare not take sexual agency for granted. This fight over sexual liberty is not over yet; it is deep and primal and it will be the ground over which much of the blood of global conflicts in the next 100 years will be shed. For indeed, much of the world today is still at war over virginity.  And this makes this Measure for Measure, in my view, a profoundly pro-femina play.

In her repelling of Angelo, we root for Isabella not because we share her view that a woman’s virginity is more precious than life, but because what she does with her body is her decision to make.  She chooses chastity not only out of constancy with her moral code, but, in spurning the sexual entitlement of the creepy, rapist-in-waiting Angelo, her chastity becomes a defiant act of feminism. Her body is hers, no other’s–her sexual decisions are hers alone to make.

The genius of Munby’s concept is its subtext that human exploitation at both ends of the sexual societal spectrum—from the capitalistic hedonism of cabaret society to the  Puritanical, Talibanesque repression of Angelo’s regime–are essentially the same.

The dirty little secret is that disempowered bodies are expendable. Certain bodies can be treated as community property—to be bartered and betrothed, trafficked and exploited, indentured and enslaved, hidden from view or stripped naked for all to see.

And so it would have been in Measure for Measure had not Isabella resisted, and won.

As such, Miriam Silverman’s Isabella is a curiously modern woman; for beyond her embrace of the old-order view of chastity as virtue, Isabella is a virtuoso of reason. Silverman’s Isabella is no mindless adherent to a rigid religious doctrine; rather, she is a woman of intense intellect and judicial understanding. We find in her—as we do in Kurt Rhoads’ Duke–the triumph of logic over dogma, of ethics over obedience, of conviction over convenience. Theirs are the voices of justice, of enlightened moral suasion that is the foundation of an ideal democratic justice.  As such, the chaste Isabella, ironically speaks for us in modernity.

As the Duke Vincentio Kurt Rhoads brings a measured, if internally torn, gravitas to the role.  In the final segue from the pre-show cabaret to Shakespeare’s play, the Duke has a moment of distinct attraction to a sensual, virile male cabaret dancer.  While he eschews this attraction, the allure of bisexuality appears to so unnerve Vincentio that it fuels his abrupt departure at the top of the play, as well as his entrustment of his fallen-into-decadence state to the peevish, punishing Angelo. 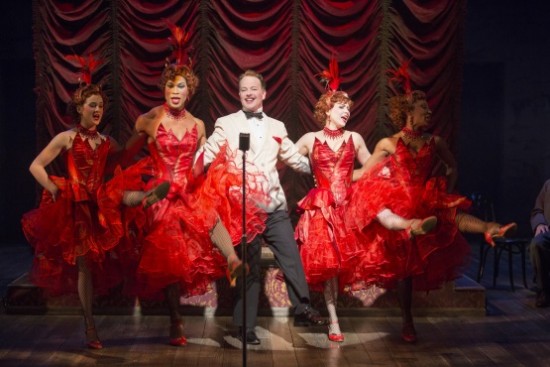 Scott Parkinson gives the villain Angelo a terrifying, recognizable extremism—he is the very embodiment of Fascism in its multitude of forms; with but a few choice costume changes, his Angelo could be a misogynistic judge in Montana or Texas, a Taliban commander, an honor killer in India, or a preacher with the Westboro Baptist Church.  Parkinson infuses Angelo with just the right combination of venom and sleaze, and we are elated to watch him dressed down at the play’s end.

Avery Clark as Claudio brings an earnest astonishment that his fortunes could have fallen so horrifically unjustly.  He and his pregnant fiancée Juliet—sympathetically played by Katie de Buys—-embrace life and its manifold pleasures. They are we—and we recoil at the absurd injustice of Claudio’s death sentence.

As Angelo’s one-time betrothed Mariana—summarily dropped by him when her dowry was lost at sea—Natascia Diaz brings a soulful, Lorca-like dignity to the role.  Happily, director Munby twice has her lift her luxurious voice in song, filling the music with much of Mariana’s pain.

Much of the abundant humor in Measure for Measure—and it is a very funny show– comes compliments of Cameron Folmar as the wickedly hedonistic Lucio and Chris Genebach as Pompey (aka “The Doctor”), the roguish, drug-peddling pimp. Folmar brings a full-throttle, hilarious irreverence to Lucio, bringing the house down with perfectly-timed, insouciant offhand remarks during the play’s most dramatic moments.  And Genebach, with his purposeful, genial wit and turn-on-a-dime actor finesse, charismatically guides modern audiences through the intricacies of Shakespeare’s narrative and logic.

Jack Wetherall as Escalus, the Duke’s trusted and worthy Lord, and John Lescault as the morally right Friar Peter to whom the Duke turns to master his disguise, personify integrity and fidelity, both qualities in short supply in this increasingly totalitarian locale.

As the middle-aged bawd Mistress Overdone, Naomi Jacobson shows us the vulnerability beneath the broad humor of the bawds, and as the simpleton constable Elbow, Hugh Nees gives a charmingly comic performance.  The butt of much of Pompey’s jesting, Elbow holds tight to his malaprop-filled presumptions, and we delight in watching the theatrics.

Eric Martin Brown’s Provost, the functionary behind much of the play’s legal wrangling, works the mechanisms of bureaucracy with clipped precision. Andrew Criss gives us an utterly convincing Abhorson the executioner, as does Dan Istrate as the seditiously drunk prisoner Bernadine.  Ned Noyes gives a crisp professional performance as the gentleman Froth. 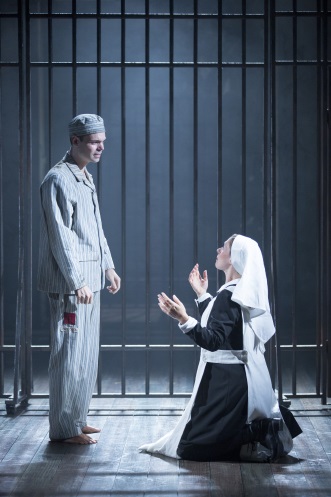 very Clark as Claudio and Miriam Silverman as Isabella. Photo by Scott Suchman.

Much of the sensual heat of the evening, however, comes from the ensemble–with special applause to Amber Mayberry and Gracie Terzian for their show-stopping “nuns-to-strippers” burlesque routine near the end of the pre-show cabaret, and to S. Lewis Feemster for his portrayal of the drop-dead gorgeous drag queen also in the pre-show. Indeed, the ensemble for Measure for Measure, which also included Jacqui Jarrold, Manu Kumasi, Michael Litchfield, Jack Powers, and Jaysen Wright, deserve additional applause for their full-bodied portrayals of the bawds and enforcers of this bifurcated world, and for the elegance and ballet-like precision with which they instantly transformed the stage from setting to sub-setting and back again throughout this most fluid production.

Shakespeare Theatre Company’s Measure for Measure—like almost all STC shows—is a lavishly beautiful show. The production values dazzled.  Set designer Alexander Dodge has created a glorious and delightfully low-tech maze of rolling panels that the ensemble twirls into multiple configurations of a prison, a monastery, a convent.  From above grand black and red striped National Socialist-esque banners descend to create the political settings, a huge burgundy draped velvet backdrop instantly creates the steamily luxuriant cabaret.  Behind it all are these marvelously peeling giant gray walls—bravo to the team that created those.

Lighting Designer Philip S. Rosenberg has layered the stage in evocative effects throughout; with the distant rows of votive candles being particularly mystical. Costume Designer Linda Cho created a resonate palate of costumes, from the stunning cabaret garb to the ominous militaristic attire, to garments of the cloistered life of religious orders and prison life. Composer Adam Wernick, with German Cabaret Lyricist Drew Lichtenberg and English Cabaret Lyricist Martin Hutson, join Sound Designer Walter Trarbach to bring forth a dangerous world both of lusty, lyric song and celebration and the menacing clang of imprisonment and repression.  Choreographer Daniel Pelzig has done a marvelous job of capturing the seductive abandon of 1930s German cabaret society turned Fascist regime, and Robb Hunter’s Fight Direction intensified the dramatic action.

The 20-minute cabaret pre-show was a masterstroke of realizing Director Jonathan Munby’s concept, and audiences are strongly urged to get there early to enjoy it.  A lusty, lush spectacle of naughtiness, the presentation grabbed us by the lapels and flung us into this world of debauchery and its draconian hangover of punishments.  A wildly theatrical and engaging production.

Running time: 2 hours, plus a 20-minute pre-show and a 15 minute intermission