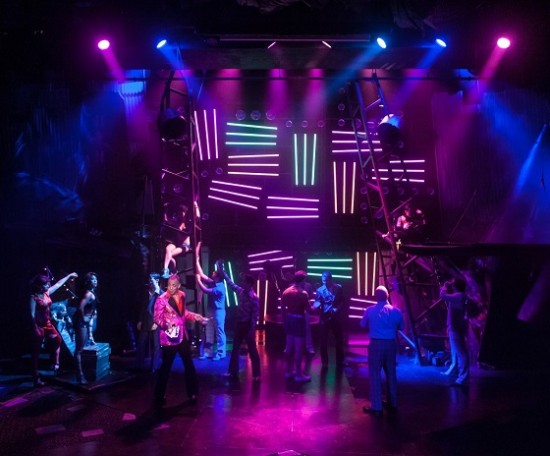 The cast of “Miss Saigon.” Photo by Christopher Mueller.

Signature Theatre’s ambitious forays into extravaganza theatre continue as Miss Saigon whirls into town. But just like a first love that you meet years later, the second time around can sometimes not live up to the initial billing.

Miss Saigon, the ‘90s sensation on Broadway, is really a clash of genres. Conceived by the creative team of Claude-Michel Schönberg and Alain Boublil’s who gave us Les Mis, it has the feel of grandeur, a raising of the nobility of love to higher standards against the backdrop of historical upheaval; here the end of the Vietnam war and escape from Saigon.  It is a retelling of Puccini’s Madame Butterfly—a serviceman  meets and falls in love with a poor, naïve Asian woman pressed into unseemly work, but with a heart of gold.   The creators touch upon the social overtones of injustice, imperialism, prejudice just enough for a relevant take on it. For American audiences, it plays with our muddled feelings of that unfinished war, and differently a generation removed.

Signature has a good go at it, but it has a lot of moving parts and clashing genres to contend with.  Technically, it is their most daunting show yet—calling for special adaptable sets that work for several locales— from the steamy Saigon “Dreamland” and the American Embassy to various street scenes. Already uniformly dark, the theatre is cocooned in parachute camo green down to the curtains.  Seamless transitions do keep the show crisp. 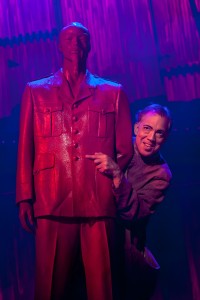 Though not much of a dance show, the march routine of the Viet Cong is a fine change of pace, accented nicely by the metallic reverberation of the floor on each step. Due to reality and Reagan National flight restrictions, actual helicopter flight was not considered, but the lowering of a frame with strobe lights and accompanying effects had the same effect on this ‘signature’ scene,  the “omg!” moment of the show. Adam Koch and staff get a hoo-ah! for their efforts.

But in the end it is a love story. We see the star crossed lovers Kim and Chris in Dreamland. Kim (Diana Huey) in white, stands in contrast to the gyrating half clad gals vying in a tawdry contest to be Miss Saigon for the night. Chris (Gannon O’Brien) takes her away, seemingly transformed by her honesty and innocence. They gently sing “Sun and Moon” in each other’s arms, away from the horrid world around them. Their happiness is short-lived as they are separated during the sudden fall of the capital city.

Huey, as the petite young innocent, is a luminescent figure onstage. In a character that calls for vocal range and strength, as well as deep emotional exchanges, she wins the title on all counts.   O’Brien handles his duties well, though not fully getting his teeth into the role. Vocally he was competent, but bereft of needed vocal emotion. (Backstage note: O’Brien was a last minute understudy for the role and performed intensive study the weeks before the show.) Along with a capable friend John (Chris Sizemore) he and the other soldiers are clunkily deciding whether to go at it as soldiers realistically or stylistically. Thuy (Chris Mueller), Kim’s village betrothal turned communist party stooge, is effective, but plays it strong and operatic, standing in contrast to others. Part of it is the cadence of the show, sometimes spoken, sometimes sung–Les Mis lite, if you will. 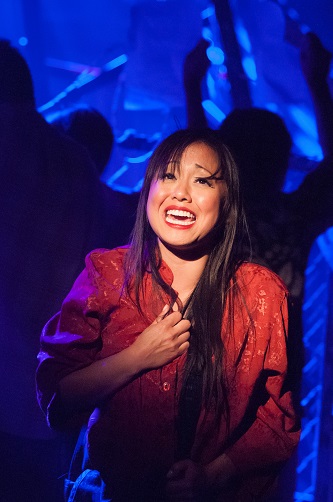 The other main character that provides a connecting thread to the murky haze that is Miss Saigon is The Engineer (Thom Sesma), the hustler/owner of Dreamland. We watch, fascinated at his nimble sense of survival, as he goes from nasty bar owner to obsequious communist conformist to conniver to dreamer. Think of the Thernardiers of Les Mis, though less overtly evil and more resourceful. Sesma grows in stature in energy throughout the show, culminating in “The American Dream,” a roller coaster fantasy number about his superficial values—our Saigon song and dance flim flam man.

Fun entertainment, but the show missed making a strong enough connection with the audience, which was attainable, in a small environment.

Nice scenic effects by Adam Koch and lighting design Chris Lee, great orchestral direction by Gabrial Mangiante, though it overpowered singers at times. I’m sure Director Eric Schaeffer wishes he had a little more time to tie elements together for his spectacle.

As Kim says at the end of her journey, “How in one night have we come so far? But we were close.”

Advisory: Adult themes and is not appropriate for children.