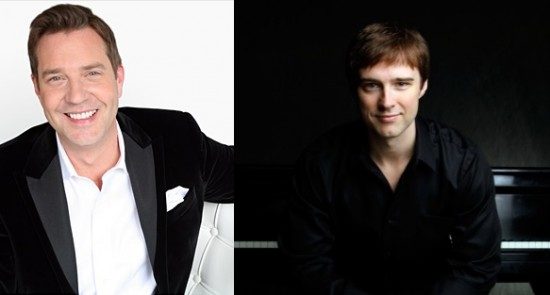 Singer/composer Michael Cavanaugh is probably best known as the Piano Man from the Broadway production Movin’ Out, which was a show featuring the songs of Billy Joel. Cavanaugh brought his new and very enjoyable show The Songs of Elton John and More to the Kennedy Center’s Concert Hall and rocked the house with songs made famous by Paul McCartney, The Eagles, Elton John of course, and he even managed to get one of his own original songs into the program.

Cavanaugh was backed by his own rhythm section, which is made up of Jamie Hosmer (Keyboards), Giovanni Mastro (Guitar), Billy V. (Bass), and Johnny Fedevich (Drums), plus DC’s musical treasure the National Symphony Orchestra with the always charismatic maestro Steven Reineke who supplied many of the orchestrations for the evening with additional orchestrations from the BSO’s Jack Everly.

…he is careful to give them his own interpretations vocally while paying homage to the original vocalist. A lesser performer would have just done a copycat impersonation.

The song list is a veritable catalogue of musical riches and encompasses a cross section of the American Rock ‘n’ Roll songbook. A few of the audible delights include Don Mclean’s “American Pie,” where even the orchestra got to sing on one of the choruses. There is Cavanaugh’s take on a Pete Townsend song called “Let My Love Open The Door,” which is quite beautiful.

Elton John’s name is in the title so I’d be nuts not to mention some of his songs. There is a neat pairing of “Honky Cat” with “Benny and the Jets,” “Your Song,” which was John’s first big U.S. hit, another neat pairing of “Goodbye Yellow Brick Road” paired with “Rocket Man” and, of course, “Candle in the Wind,” which John initially wrote as a love letter to Marilyn Monroe and later revised the lyrics so the song could be performed as a remembrance at the funeral of Princess Diana. Regardless of what Cavanaugh is singing, you have to hand it to him because these songs are iconic, but he is careful to give them his own interpretations vocally while paying homage to the original vocalist. A lesser performer would have just done a copycat impersonation.

As I said earlier, this was a symphony concert so it’s time to praise maestro Reineke and the NSO for once again showing us the versatility they have as an ensemble. Orchestral highlights include a medley of songs by Chicago and only Reineke could come up with the idea of taking all the famous themes and vamps from songs like “Eye of The Tiger”and turn them into something called “Riffer Madness.”

For me, the two standout pieces of the evening are Cavanaugh’s original composition called “Miles Away” and a pairing of John’s “Tiny Dancer” and “Don’t Let the Sun go Down on Me.” They were two of the more subtle sections of the evening and Cavanaugh’s vocals and piano playing made them definite highlights.

The audience, through social media and texting, is able to choose one song on the program and the selection at my show was Billy Joel’s “Piano Man,” which is not a shocker to me at all. It’s one of Cavanaugh’s signature songs from Movin’ Out and is definitely a classic song of the Rock ‘n’ Roll catalog.

For those of us that remember the classic versions of these songs, Michael Cavanaugh has reinvented them into something that dare I say sometimes improves upon the originals. It helps that the NSO with Cavanaugh’s band makes the music sound big and lush. If you are a fan of Elton John and the other composers on the program, here is a chance to hear the songs in a way like no other. If you are a person with a set of fresh ears, then this is the perfect introduction to some of Rock ‘n’ Roll’s best songs as performed by the oh so talented Michael Cavanaugh and because you can’t say it too much, DC’s musical treasure the NSO with maestro Steven Reineke.

Running Time: Two Hours and ten minutes with one intermission.

Michael Cavanaugh: The Songs of Elton John and More with the NSO has one more performance tonight at the Kennedy Center’s Concert Hall. Tickets can be purchased by clicking here or by calling 800-444-1324.