Some musicals regardless of how they originally fared on Broadway just refuse to go away. Richard O’Brien’s love letter to B horror movies (or C and even D horror movies) is called The Rocky Horror Show and it is a prime example of not needing reviews to become successful. It only ran originally for 45 performances and managed to wreck the inside of the Belasco Theatre in the process.  It then became regarded as one of the worst movie musicals ever made. What Rocky Horror has amassed over the years is a loyal following of fans, and the audience I saw the show with at American University was made up of fans of the movie and Rocky Horror virgins like me.

The production currently playing at AU’s Harold and Sylvia Greenberg Theatre is loads of fun with everything you’d expect from it. There are phantoms, a mad scientist, and an Igor type of character straight out of a bad Ed Wood movie (oxy moron). It also has all the songs that you remember singing along to like the “Time Warp” and “Science Fiction Double Feature.” 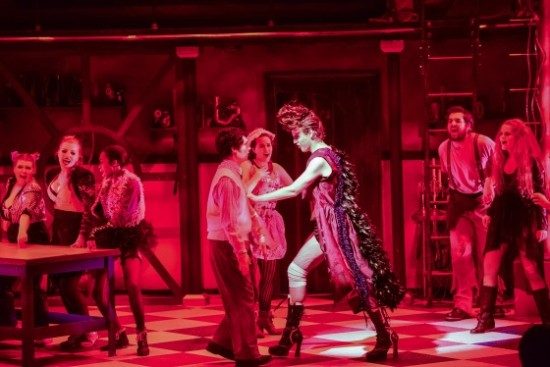 The plot, such as it is, concerns a young couple named Janet and Brad (Julie Nolan and Jesse D. Saywell). When their car gets a flat tire, they end up at a castle owned by a mad transvestite scientist named Frank -N- Furter (Matthew Rubbelke). He has a male assistant named Riff-Raff (Ryan Burke) and two female assistants as well named Magenta and Columbia (Sarah King and Stephanie Wilson). Frank -N- Furter’s latest creation is a good looking blonde Tab Hunter type named Rocky (Bryce Sulecki). Things start to go awry in the castle and if you just think of any Vincent Price horror movie plot you can figure out what happens next.

I am impressed by the quality of the cast in this show. From the top we have Lexie Martin as the Narrator. Her singing in the opening song “Science Fiction Double Feature” was just great. As Janet and Brad, Julie Nolan and Jesse D. Saywell sing and act so well together and their characterizations were just perfect. Ryan Burke as Riff-Raff shows us again how versatile he is as a performer. The last time I saw him on stage, he was playing Sky Masterson in Guys and Dolls and the time before that he was Jamie in The Last 5 Years. That makes three totally different roles from one big talent. What can I say about Matthew Rubbelke as Frank -N- Furter; he looks great in heels and puts over his opening song “Sweet Transvestite” like a seasoned professional. As Magenta and Columbia, Sarah King and Stephanie Wilson make the most of their stage time in their feature with Janet called “Touch-a Touch-a Touch Me”, as does Bryce Sulecki as Rocky in his turn called “The Sword of Damocles.” Other members in the cast include Joel Iscaro as Eddie who is Columbia’s lover and Julia Peltier as Dr. Scott (cue toilet paper). The six member ensemble play the rest of the castle’s inhabitants and as they should be mentioned by name for all the talent that makes up the group, we have Bianca Lipford, Clancy Yovanovich, Sean Whalen, Matt Meyers, Alina Stone and Claxton Rabb. 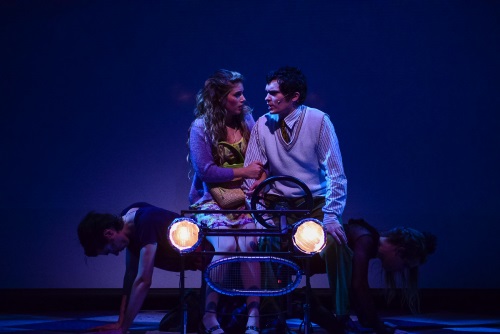 Ralph Glenmore’s choreography is perfectly in tone with what the show calls for. The “Time Warp” is energetic and gets the audience on its feet to join in and his floor show production number was a knockout.

John – Michael d’Haviland’s music direction sounds really good. No one is over singing, everyone is on pitch and most of all everyone understands what they are singing about. Although the musicians are not listed in the program, it sounds like the original six piece orchestration as scored by Richard Hartley. The band which is hidden from sight never overpowers the singers but manages to rock out any chance they can get.

Director Cara Gabriel stages the show at a breakneck zany pace with lots of fun and camp. She even figures out how to handle one scene that I never thought you could do on stage in a college setting with great taste.

Production elements match the material very well. Samantha Vieth’s gothic castle setting is reminiscent of one of those low budget horror films from the 50s (compliment). Barbara Tucker Parker’s costumes and Jason Arnold’s lighting add to the cheesy fun. Kudos goes to sound designer Ana Cetina for making it so you can hear every word. This is not an easy feat in a rock musical.

Yes, this musical is raunchy and offensive, but I had a good time, and the cast and production need to be congratulated for making this camp classic into a winning production.  “Jump to the left and then a step to the right” and head on over to AU’s production of The Rocky Horror Show.

The Rocky Horror Show plays through October 26, 2013 at the Harold and Sylvia Greenberg Theatre—4200 Wisconsin Avenue, in Washington DC. For tickets call the box office at (202) 885-2587, or purchase them online.