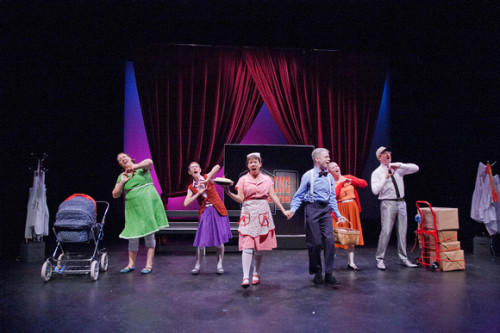 One of the holy grails of theatrical envelope pushing in recent years has been to break the fourth wall and integrate the audience in new and interesting ways. Dozens of troupes and directors have attempted it, but few have managed to make it anything more than a gimmick or fleeting distraction. dog & pony dc have unequivocally bucked this trend with A Killing Game, creating an experience where the audience is not only included in the action but is downright essential to it.

Part musical, part game show, and part improv exercise, this production is a remounting of the same show first performed in 2012 at CHAW. The loosely threaded plot concerns a plague that is slowly killing off the residents of an idyllic suburban town, and after a brief musical opening, the participatory portion of the show begins in force.

… the energy of the players is just as infectious as the disease that causes them so many overdramatic onstage deaths.

Upon entering the theater, each audience member is given six “Action Cards,” each of which provides an instruction for one of six rounds. For example, a speech given by the Commissioner of Health has some audience members die as infected citizens, others dragging the bodies offstage as undertakers and others as “disease experts” asking questions of the remaining “living” theatregoers.

Every scene incorporates the audience conscripts in some similarly clever fashion, but the shining moment comes in the fourth round when the show’s much promoted technology integration comes into play in a news anchor scene where the stories come from texts, calls, and even Tweets provided by the audience. For a less disciplined company, such a scene would likely devolve quickly into barely constrained chaos and rushed jokes, but the ensemble of d&pdc operates like a carefully tuned machine, culling only the best contributions and making the game indistinguishable from one where the audience provides the ideas in person. In a world where a theater company lives and dies by its online presence, d&pdc has taken the next step in making it part of the artistic process itself. To pull off this feat without coming across as stale or forced is perhaps the greatest accomplishment of the show. 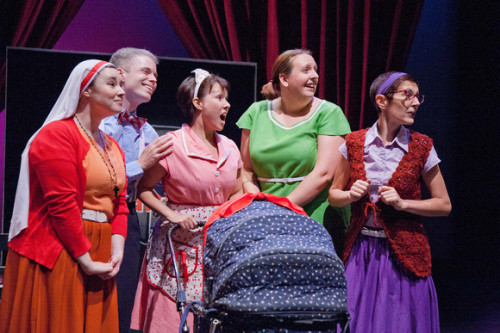 Creative use of technology aside, A Killing Game would not work at all without a talented and dedicated team of actors willing to push their improv skills to the limit, and the ensemble succeeds above and beyond in this respect. Taking a fresh audience every night and presenting them with an almost completely novel experience that requires their active participation adds an entirely new dimension to what is expected of an actor. Led by the host Mr. Chrome (played with affable charm by J. Argyl Plath), each color named and color coded actor knew exactly when to prod a nervous recruit and when to let a particularly raucous one have their moment. After several workshops and a wildly successful Fringe run, d&pdc have distilled the action of the show down to a science, letting the spectacular improv skills of each actor shine to their fullest.

A Killing Game hits that crucial theatrical sweet spot between innovative and entertaining. d&pdc has succeeded in not so much breaking the fourth wall as not building it in the first place, and their integration of technology for a potential audience that is rarely far from one screen or another is a much needed breath of fresh air for modern theater. And yet d&pdc through all that remembers a crucial fact that other troupes obsessed with innovation so often forget: it needs to be entertaining. The audience members in A Killing Game initially act because they are told to, but they keep getting involved because the energy of the players is just as infectious as the disease that causes them so many overdramatic onstage deaths.