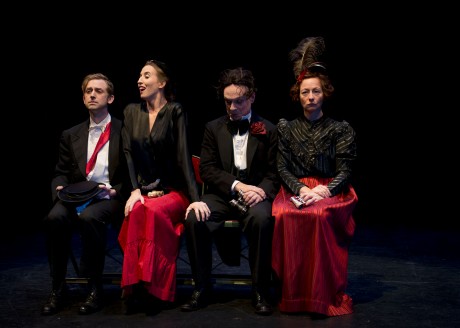 Delightful is probably not the expected adjective for a show called Cabaret Macabre, except probably for those who have seen earlier editions of the show by Happenstance Theatre.

At a time when Halloween season shows of the macabre strive simply to be gory, the production at the Round House Theater in Silver Spring is, instead, entirely inspired by Edward Gorey.

Gorey, the witty American pen-and-ink artist who devised a world of unsettling situations in elegant Victorian garb (best known for the opening credits to “Masterpiece Mystery”), is superbly translated to the stage by the half dozen troupe members in the current fourth edition of Cabaret Macabre, who can convey the tone of the cartoons with simply a scowl at the audience.

If the result is continual amusement and reliable laughter, that’s a far more welcome response then being merely jolted by a scare or doused by theatrical blood in a season where zombies are not only the prevailing character, but also sometimes the mindset of those doing the scaring.

Happenstance is led by a pair that seem delivered from the golden age of silent comedy. Mark Jaster in fact evokes Buster Keaton in his deadpan, especially when affixed with an unruly toupee that doesn’t always stay on his head.

His sickly smile when welcoming audiences in his top hat and tails and pasty makeup suggest Joel Grey in Cabaret; his acute theatricality wrings laughs from every twitch or askance look, a flip of a hand, or an arch of an eyebrow.

Likewise, Sabrina Mandell seems of another era, when top actresses were cherished for their character and she can play a strange old lady in a wicker wheelchair or a little girl of another era, chanting dark rhymes. 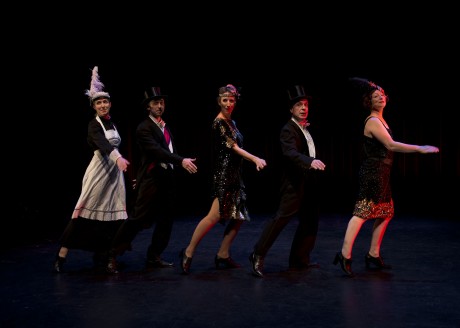 Three younger cast members, Gwen Grastorf, Sarah Olmsted Thomas, and Alex Vernon, are busy in an array of parts from high society to lowly servants with sour looks of disapproval. And on piano and horn and delivering ill-timed telegrams, Karen Hansen has the authority as a kind of musical mistress of ceremonies with music inspired by sources ranging from broken down Weimar-era Kurt Weill to Tom Waits.

The cabaret includes the briefest of–not fully explained–walk-by oddities to full blown scenes introduced with elaborate Vaudeville style cards, of an uncle who guides his annoying nieces to increasingly dangerous places to play, to a revival of its full on croquet calamity, perfectly choreographed and presented in riotous slow motion as if to wring every last laugh.

The success of this fourth production (Sad to say I didn’t see the previous three) is aided by the remarkable array of Victorian clothing from Mandell, who is also costume mistress, with one dusty, drapey dress after another — all presented before the stage’s single set dressing: a red velvet curtain along the back wall. Again, it is a throwback to another era of entertainment even as it allows the widest variety of mayhem in the blank stage before it.

With plans to take the current production to New Orleans, Happenstance deserves packed houses through the rest of the run, and encouragement to continue its first class clowning well past the spooky season.

The fourth edition of Cabaret Macabre from Happenstance Theater continues through Nov. 10 at the Round House Theater, 8641 Colesville Road, Silver Spring. Tickets at 240-644-1100 or www.HappenstanceTheater.com.