Theatre Review: ‘Death and the Maiden’ at the Spotlighters Theatre 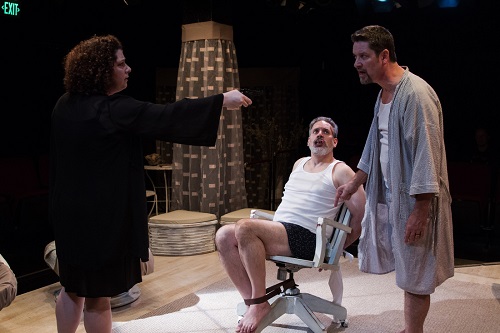 Chilean playwright Ariel Dorfman felt compelled to write about his own experiences as a witness to the ghastliness of the General Augusto Pinochet dictatorship in his country from 1973-1990.   He penned Death and the Maiden in 1990 to convey those horrors, especially the effects on the minds of the victims stemming from the torture and rape of political prisoners.

Death and the Maiden first appeared in London in November 1990.  The original Broadway production opened at the Brooks Atkinson Theater in New York on March 1992 and ran for 159 performances. It was directed by Mike Nichols and starred Glenn Close, Gene Hackman and Richard Dreyfuss.

The play, as part of the Audrey Herman Spotlighters Theatre’s 52nd season, is a potent psychodrama that under the direction of Anthony Lane Hinkle and the sterling cast consisting of Kate Falcone, Steven Shriner and Mark C. Franceschini, keeps the audience spellbound throughout and wondering what will happen next—even following the play’s denouement.

It will keep the audience glued to every word…

It takes place at a remote ocean-front house in a present day Latin American country (believed to be Chile) following the transformation from the heinous dictatorship to a fledgling democracy.  While returning home from a visit with the president of the country, lawyer Gerardo Escobar (Steven Shriner), who was offered a position on a commission to investigate atrocities committed by the previous government, had experienced a flat tire.  Without a jack or a spare, Gerardo frantically waved his arms at motorists zipping past him for 45 minutes only to having the good fortune of Dr. Roberto Miranda (Mark C. Franceschini) stopping to assist.  Roberto dropped off Gerardo at his house but returns later.

Once home, Gerardo tells his wife, Paulina Salas (Kate Falcone) what happened.  The one weak point in the play ensues when Gerardo and Paulina go back and forth as to why the jack and spare were missing in the first place.  The exchange serves no purpose other than revealing the dynamics of the marriage.

Paulina is upstairs in the bedroom later that night when Roberto shows up and engages Gerardo in idle chatter over a couple of drinks about the state of the government.  The host then convinces Roberto to spend the night.   While Roberto is apparently asleep, out of the darkness steps Paulina who swiftly gags and bounds the unsuspecting doctor to a chair and the drama takes off following this setup.

The next morning, Gerardo discovers his “imprisoned” friend and demands an explanation from Paulina who is pointing a loaded pistol at both.  She accuses the doctor of being a part of a group of thugs who tortured and raped her 15 years earlier when she was a political prisoner. Paulina recognized his voice, his skin and his smell as well as a familiar phrase he used in the conversation with Gerardo.  During her ordeal she heard Franz Schubert’s composition “Death and the Maiden” over and over to the point she recoils in terror every time she hears the song since.

Gerardo is aware of the trauma experienced by Paulina and has difficulty articulating his feelings as if he, too, had been traumatized.  He also believes that Paulina is suffering from a form of mental illness as a result, and this hostage-taking confirms it.

Paulina’s goal is to put Roberto “on trial” and exact a confession from him.  Gerardo is not sure if Paulina’s account of what happened translates into Roberto’s guilt; he had been skeptical from the outset, and he crafts the confession for Roberto to sign in order to placate the unstable and dangerous Paulina.

Without revealing the subsequent twists in this confrontation as well as the play’s interesting and thought-provoking ending, if there actually is one, suffice to say Death and the Maiden succeeds in offering a suspenseful tale carried out by superb actors.

Kate Falcone as Paulina plays her role to the hilt.  She convincingly demonstrates an amazing range of anger and resignation as one would expect from person who was a victim of physical torture and rape.  There is palpable frustration from her inability to bring closure to her past horrors. Ms. Falcone, who was solid portraying Dora Strang in the Spotlighters production of Equus, is outstanding as this play’s central character.

Following recent successful stints at the Spotlighters in Hot l Baltimore and Rose’s Dilemma, Steven Shriner is equally adept in his role as Gerardo who must also endure the burden of his wife’s past experience and tries to determine if the evidence supports Roberto’s guilt or his wife’s paranoia.  When enraged, Mr. Shriner delivers a powerful performance, and his dramatic interactions with Ms. Falcone make the play work.

As Dr. Roberto Miranda, Mark C. Franceschini returns to the Spotlighters after a 25-year hiatus and also delivers a sturdy performance.  Half the time he is silent, sitting tied to a chair, but when he speaks he makes an impassioned defense of his innocence.

Veteran director Anthony Lane Hinkle oversaw this crisp production that aside from the stellar acting performances featured effective lighting from Kel Millonie and sound by Brian Kehoe that featured faint ocean sounds and soft music.  The simple set consisted of beach house-style furniture and was also created by Mr. Hinkle.

The Spotlighters production of Death and the Maiden is highly recommended.  It will keep the audience glued to every word and every movement and will challenge the audience to be judges in their own right as to what was real and what was imaginary.

Running Time: One hour and 50 minutes with a 15 minute intermission.

Advisory: The play contains adult themes and profanity and is not recommended for children.