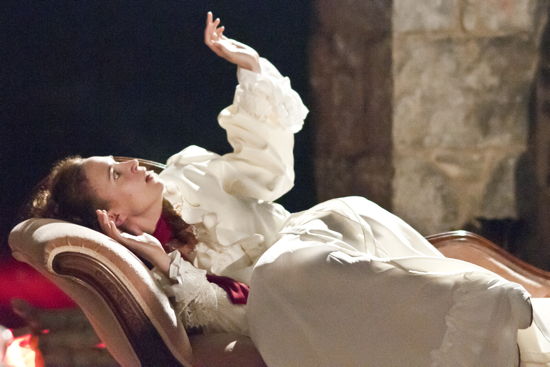 The mist, the shadows, the large black birds circling the sky above and footsteps echoing off the barren walls; perhaps you are in a haunted house or perhaps you are entombed in the Chesapeake Shakespeare Company’s moveable production of Dracula.

The legend of Dracula can be traced back to a 15th century prince named Vlad Dracul, also known as Vlad the Impaler from his favorite form of inflicting death and torture. He was born in Transylvania and grew into power after impaling his way to the throne of Wallachia (a town now found in Romania).  It was this legend that writer Bram Stoker based his 1897 epistolary gothic horror novel, “Dracula,” and from this novel the play Dracula is based.  Stoker’s Dracula is a centuries old undead Count that lives on human blood and through the sharing of blood can control people’s actions.  Professor Abraham Van Helsing is introduced as a vampire hunter and Lucy and Mina are his young beautiful victims that fall prey to Count Dracula’s eerie magnetism.

There are not many places where you can literally follow around the iconic Count Dracula, and become a part of something as well done and spine tingling as this creation.

Stoker’s novel grew in popularity and became a firmly fixed part of popular culture with the first movie made in 1922, “Nosferatu.” Then a large Hollywood studio released of “Dracula” at New York’s Roxy Theatre, on February 12, 1931, and the opening night reports of film goers fainting in shock spread and within 48 hours of its opening, “Dracula” had sold 50,000 tickets and proved to be a huge box office sensation. 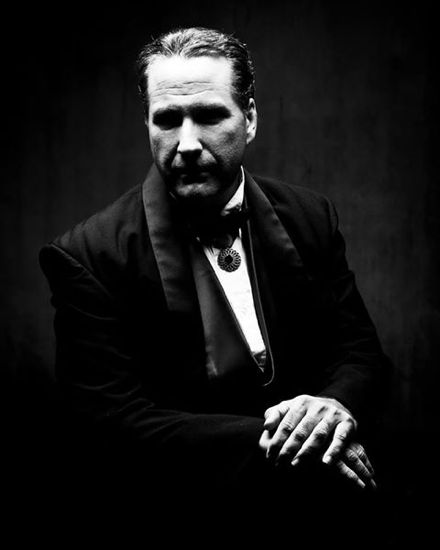 The Chesapeake’s Dracula, the play by Hamilton Deane and John L. Balderston, opens to a worried father, Dr. Seward (played by an intense Frank Mancino), who happens to run an English sanatorium and who has a daughter, Lucy Seward (played by a captivating Blythe Coons) that is succumbing to a mysterious illness.  Dr. Seward’s guest, Dr. Van Helsing (played by zealous Scott Graham), believes Lucy is a victim of a vampire, and after a strange visit by a new shadowy neighbor, Count Dracula (played by an unnerving Michael P. Sullivan), Dr. Van Helsing is convinced that the vampire in question is the Count.  As Lucy grows weaker and paler, Dr. Van Helsing must destroy the Count to save Lucy’s life, so they enlist the help of a sanatorium resident, Renfield (played by a perfectly strange Matthew Ancarrow), who seems to be a barometer for the whereabouts of Count Dracula. The intensity of the search increases as Lucy slips away and the play ominously careens to the end.

Scott Alan Small does a wonderful job of directing this movable production.  As the audience moves around the location, each room and area of the ruins fits perfectly with the actors, so much so that the audience can easily slip into the action on stage and become a minor part of the story.   I know that during the bedroom scene I was so close to Dracula, I was inching back in my chair, as I my first instinct was to protect my neck – then run!

Michael P. Sullivan embodies the vampire legend of old.  Smooth and old world aristocratic, he could easily charm women and men alike even without his hypnotic powers, and Sullivan creepily moves between charismatic and malevolent in a blink of an eye.

Chesapeake Shakespeare Company’s production of Dracula is scary, but it’s fun too.  There are not many places where you can literally follow around the iconic Count Dracula, and become a part of something as well done and spine tingling as this creation.

Running Time:  Two hours and 20 minutes with one 15-minute intermission.

Dracula is playing through October 31, 2013 at Chesapeake Shakespeare Company, Patapsco Female Institute Historic Park, 3691 Sarah’s Lane, Ellicott City, MD 21043.  For tickets, call the box office at (410) 331-8661, or click here. It is strongly encouraged to purchase tickets in advance.  All remaining Saturday performances have already sold out.