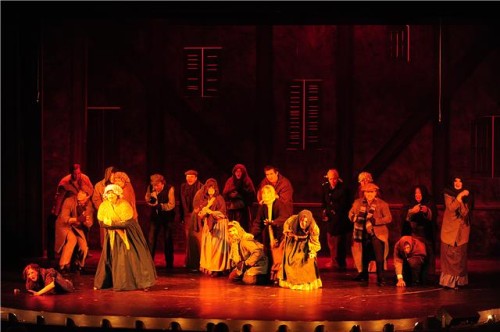 Recalling the wise words of a director I worked with in my formative years, he once intoned “I wish theatre groups not take on Man of La Mancha unless they are prepared to do it right.” His reverence for La Mancha with its sweeping, majestic vocals and themes of imagination, sacrificial love, and redemption was evident. This same caution applies personally to the other great 20th century heart-musical, Les Miserables.

The 3 decades-long musical phenomena based on Victor Hugo’s classic novel has now been reaching regional theatres and with it, my aforementioned trepidation. Fortunately, I had a big sigh of relief when taking in Riverside Theatre’s compelling production of Les Miz. A dedication to the art of storytelling and an understanding of the human spirit enables this production to soar.

The greatness of Les Miz is that it takes you away and holds you there for a good long time.  The difficulty is in the brisk pacing and the challenging vocals. As constructed by Claude-Michel Schonberg (music) and  Alain Boublil and Jean-Marc Natel (lyrics) its operatic vocal arrangements imbue the show. Most of the dialogue is sung and the action burst forth at a frenzied pace. The layers of this show also offers many subplots–secondary characters that you get to know and embrace or watch in horrible fascination. 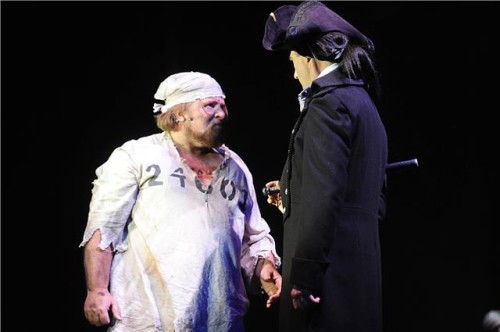 The story begins with Jean Valjean (David Michael Felty) released from prison after 19 years for stealing a loaf of bread. Disgraced by his incarceration and unable to  return to society, he is about to be sent back to prison, except for an act of compassion by a bishop, which leads him to his inner redemption. As he sings “Who Am I?” he declares that “his life is now for God.” With a new identity, he is a parole breaker, and a policeman Javert (Thomas Adrian Simpson)  is obsessed with hunting him down.

Valjean seizes on his chance to make a difference as he becomes a businessman and mayor of a town. But Fantine (Erin Miele Huss), a woman who worked for him, enters into her own descent to hell; unemployed, she turns to prostitution, desperately trying to care for her child. Her  strong, heartbreaking rendition of  ‘I Dreamed A Dream’ echoes the pain in her life.  Recognizing the opportunity to help someone in despair, Valjean vows to take care of Fantine’s child, Cosette (Kate Merryman), setting his life course. He is on the run again after deciding to reveal himself and not let another man go to jail for him, singing the resounding anthem “24601.” Javert finds him and they clash both physically and verbally in “The Confrontation,” as they circle each other in song.

Valjean’s meeting with the couple keeping Cosette, is an eerie sequence but allows him to fulfill his promise. Bill Upshaw and Carol Hagy, the Thenardiers, are the twosome that supply the show’s comic relief. Their rendition of “Master of the House”–always a crowd pleaser–is played with especially earthy tones, shall we say. Like the opportunistic survivalists they are, we see them cleverly injecting themselves into the story line as foils for Valjean. Great hilarity in their over-the-top performances, though they are usually played in more sinister fashion. Their take on it, enhanced by their costumes, was more a pair of malevolent clowns. But it worked.

Riverside Theatre is quite a little secret south of DC.

Valjean relocates to San Michelle, which has become a powder keg of unrest, led by idealistic prep boys.  Now a young woman, Cosette falls in love with a young patriot, Marius (David Pope), the leader of the group. Both Merryman and Pope are convincing and expressive as they perform a touching duet: we are treated to innocent first love (“A Heart Full of Love”) set against the marching beat of rebellion (“Do you Hear the People Sing?”) Pope brings a strong mid range tone to his role and nice stage presence. The “schoolboys,” as they are referred to, have great camaraderie, idealistically planning to make a difference in their world, singing “Do You Hear the People Sing?.”  They have fine ensemble voices, though it is hard to differentiate the students.

Alas, Eponine (Caitlin Shea), the Thenardier’s daughter, is also in love with Marius, who doesn’t realize it. Her standout “On My Own’ explaining her make believe love for him is strong and vibrant and achingly real.  As impressive is her death song, the touching “A Little Fall of Rain.” 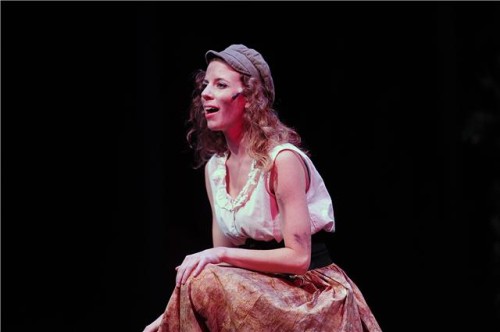 We are now drawn to the barricade that the students construct and rally around, while slowly realizing it will never hold. Valjean makes a decision to try and save Marius and risks revealing himself. His “Bring Him Home” is a wonderfully slow tenor plea to God to grant him this wish of safety for Marius that stopped the show.  Captured in the action, Javert is freed by Valjean and, unable to accept this gesture and the failure it implies, commits suicide ‘Soliloquy – Javert’s Suicide.’ Great power and force to make this realistic for the baritone, as we also feel his pain, however misguided.

Valjean moves on to Paris with Cosette and Marius, but demons confront him. Valjean struggles for final forgiveness in his tumultuous life, and as he faces life’s final chapter, it comes from a surprising source.

One of the great adversarial pairings in literature is Valjean and Javert. The performance of David Michael Felty is balanced, full and natural: one of the finest I have seen. A stout man, his features do him well in vocal resonance and tenor range and as a believable character of impressive strength.  In the recent movie, Hugh Jackman’s wiry build made it more of a stretch, though he may have been relying on his mutant powers.   Thomas Adrian Simpson as Inspector Javert, the man with  bloodhound’s sense of duty – or could it something else? – adds complexity and grandeur as a flawed man holding onto the law for identity.

Much of the attention to detail can be traced to the Artistic Director, Patrick A’Hearn, a proud original member of the Broadway cast. His dream of bringing Les Miz to Riverside came to fruition as he wanted it, in full. He insisted on the classical staging, knowing firsthand what works.

Les Miz is produced by Rollin E. Wehman and a dedicated production team, who provided an efficient less-is-more experience. Scenic Design Brian C. Barker was adept at setting up efficient scene transitions and a great barricade set up on the fly. Technical Director Phil Carlucci and Lighting Designer Nicky Mahon added nice lighting solos and an effective star background, giving perspective and depth.  The ensemble cast and its commitment to the full Les Miz experience was key. It is a show of constant snapshots and they created a visual mosaic.

What’s not to like? Let me think…. the Barricade was a tad tight, Eponine’s hair was in her face at few times, and little street urchin Gavroche’s outfit looked more like pressed plus-fours.  That’s about it. Otherwise, an uplifting musical experience.

And I finally understood the weight of Valjean’s remorse as he looks back on his life, baseless or not. His pain and final release offers a cathartic moment and a chance to let Valjean’s virtue resonate within us.

Riverside Theatre is quite a little secret south of DC. interstate, about an hour away.  Visit or revisit the Barricade. It’s an artistic fueling station.

Running Time: 3 hours  with an intermission.

Les Miserables is presented by Riverside Center Theatre,  95 Riverside Parkway, Fredricksburg, VA 22406 from July 31 to November 24, 2013. For tickets to this or other performances, as well as on their dinner packages, call the information line at (540) 370-4300 or contact here.